Nine Elms on the South Bank is characterised by its distinct neighbourhoods: Battersea, Nine Elms, Vauxhall and the Albert Embankment, as well as the spine of railway arches that connect them.

Vauxhall’s established business community is already playing a central role in the area’s development, having established the Vauxhall One Business Improvement District.

Vauxhall has a growing reputation as an exciting cultural destination, with a well-established programme of events and a gallery cluster which includes Damien Hirst’s Newport Street Gallery, Gasworks, Beaconsfield and Charles Asprey’s Cabinet Gallery.  Vauxhall’s commercial offer is being significantly expanded upon: almost 500K sq.ft. of brand new, grade A office space is coming forward, as well as new space for retail, leisure and hotels. Existing office space and many of the area’s numerous railway arches are also being refurbished, with the latter making space for restaurants, galleries, retail units and more office space.

Previously known as a place for light industry, Nine Elms is transforming into a mixed-use neighbourhood with acres of new public open spaces, including the linear park; a new Northern line tube station and restored Thames River Path. A commercial hub is developing around Embassy Gardens which includes the embassies of the United States and the Netherlands.

For 40 years New Covent Garden Market has been proudly feeding and flowering London from its home at Nine Elms. A London icon, the Market is home to some of the UK’s elite fresh food suppliers and supplies 20 out of the top 20 London restaurants. 500,000 sq.ft. of new facilities is being delivered for the wholesale market, alongside 135,000 sq.ft. of new office space and 100,000 sq.ft. of new retail space across the site.  The Food Exchange, four storeys of flexible modern offices, workspaces, specialist food retailers and food and flower education, forms part of the future Market, and a new public-facing food quarter will return London’s oldest food market to its roots.

Battersea Power Station has been a landmark on the London skyline for almost 100 years. After 30 years lying dormant, development of the former power station on its 42-acre site is delivering a spectacular new town centre with 1.25m sq.ft. (NIA) of new office space, over 150 shops and boutiques, over 40 cafés and restaurants, hotels, extensive leisure, event space and public space, served by a new river bus pier and new Northern line tube station.

You’ll find all types of jobs and business sectors in Nine Elms on the South Bank.  From Architect to Zoo keeper (Vauxhall City Farm can get pretty wild); they all work here.  Likewise the butcher, the baker, the candlestick maker (there’s a history of candle manufacture in the area).  Introducing you to some of the people who work and thrive in the area: 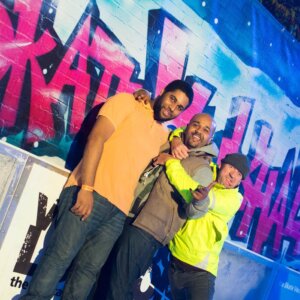