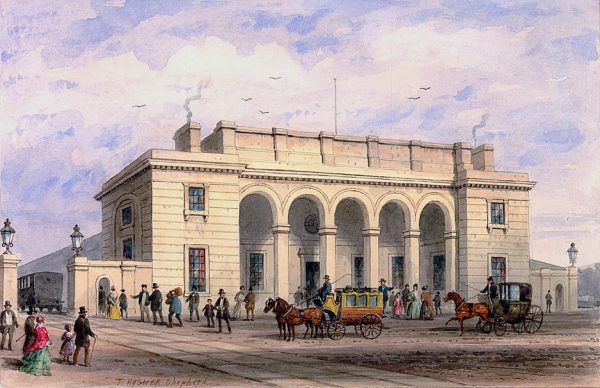 The Northern Line Extension train trials are running smoothly ahead of the line opening this autumn, but did you know it’s not the first time Nine Elms has had a train station?

Nine Elms is steeped in travel history, being near to central London and on the Thames, providing easy transport links for centuries. Still a key river route today, the latest passenger piers opened in 2017 at Vauxhall (St George Wharf) and Battersea Power Station, connecting Nine Elms to London Riverbus services.

Until 1963, a Victorian neoclassical station structure by architect Sir William Tite stood on the site of what is now New Covent Garden Market.

Tite was most famous for designing the iconic Royal Exchange on Cornhill and Threadneedle Street, opposite the Bank of England in the 1840s.

Nine Elms station opened in 1838 as the London terminus of the London & Southampton Railway.

Queen Victoria was one of the first passengers to use the station when she travelled from Nine Elms to catch the boat for the Isle of Wight where she visited her palace, Osborne House.

Special trains ran to Epsom from Nine Elms. Days after the station opened The Times reported a near-riot when 4,000 passengers who were visiting Epsom Derby found themselves stranded in Nine Elms. 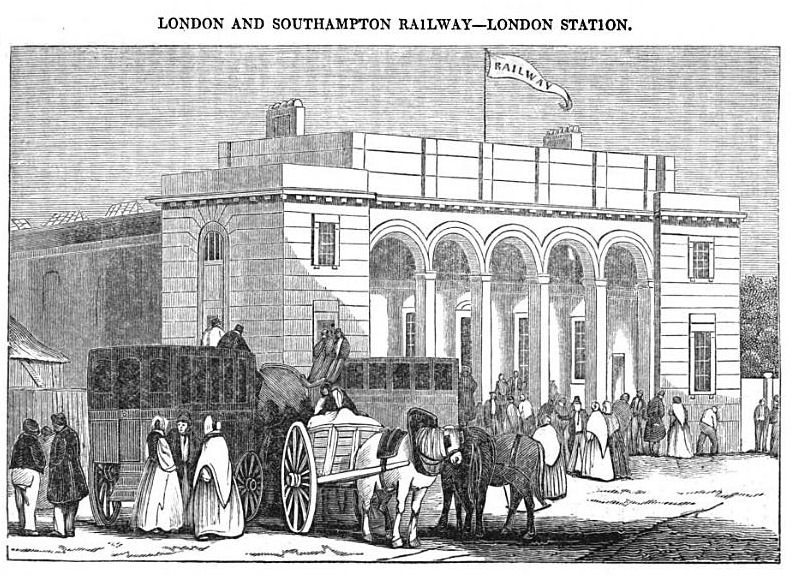 The station closed to passengers ten years later when the railway line was extended to Waterloo in 1848, making it easier to transport goods and passengers into central London.

Although the station was closed to the general public, the Royal family kept the station in use when welcoming visiting European monarchs and dignitaries. It became known as the ‘Royal Station’.

As Queen Victoria became a recluse after the death of Prince Albert, it gradually became defunct.

It became a freight yard until World War Two, where the area took a bit hit in 1941 by German bombers during The Blitz.

Remarkably, the structure stood proudly until 1963, when despite opposition from poet laureate and Victorian architecture enthusiast John Betjeman, it was demolished to be replaced by the flower section of New Covent Garden Market in 1974. Rail and river transport links were then abandoned in favour of widening what we now recognise as Nine Elms Lane.

So, are you ready for a new station in Nine Elms?

Jump on board when the Northern Line Extension opens this Autumn. There’s going to be lots of activity across Nine Elms this year, so watch this space!

If you have any memories of Nine Elms Station or know someone who does, share them with us on social media and tag @nineelmslondon or use the hashtag #NineElms.

Sign up to our e-newsletter to keep up to date on Nine Elms news.