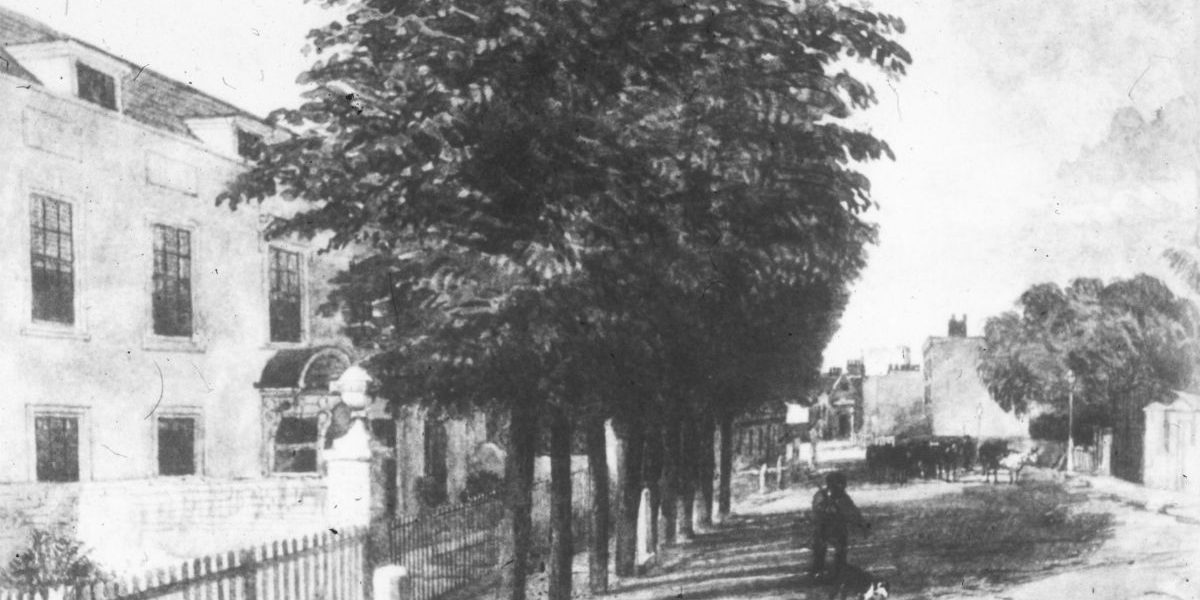 Street names often provide clues to an area’s past. The Battersea Society have done some research into our local streets to shed some light on the history of this part of Wandsworth.

Nine Elms Lane is believed to have been named after nine elm trees that grew in front of a tavern on the southside of the lane, when Nine Elms was a hamlet at the eastern end of Battersea. Today, nine elms stand on the north side of the road near the river, opposite the US Embassy.

Travelling west towards New Covent Garden Market, the road name changes to Battersea Park Road – at the point where Nine Elms Lane used to turn north towards the river. Originally called Battersea Road, the western section of this thoroughfare was at one time called Lower Wandsworth Road before being named Battersea Park Road from 1871. 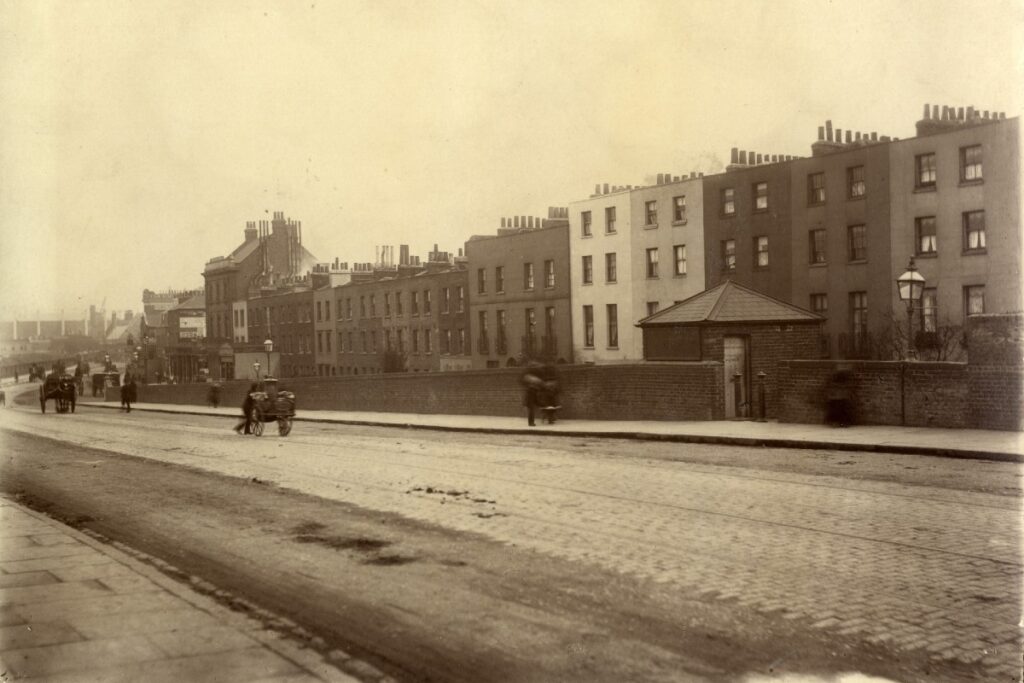 Terrace: York Place was set back from Battersea Park Road in this image from 1890. Credit: Wandsworth Heritage Service

The charmingly named Cringle Street, leading towards the river from here, may refer to the nautical term cringle, meaning a ring of rope containing a thimble for another rope to pass through.

Sleaford Street, south of Battersea Park Road, gets its name from William Sleford [sic], a Southwark butcher who bought land in the area known as Battersea New Town from the 1790s onwards, roughly equivalent to today’s Savona Estate. In the 19th century, one side of Sleaford Street was nicknamed Ginbottle Row, while the other was known as Soapsuds Bay, which suggests many women here took in laundry. 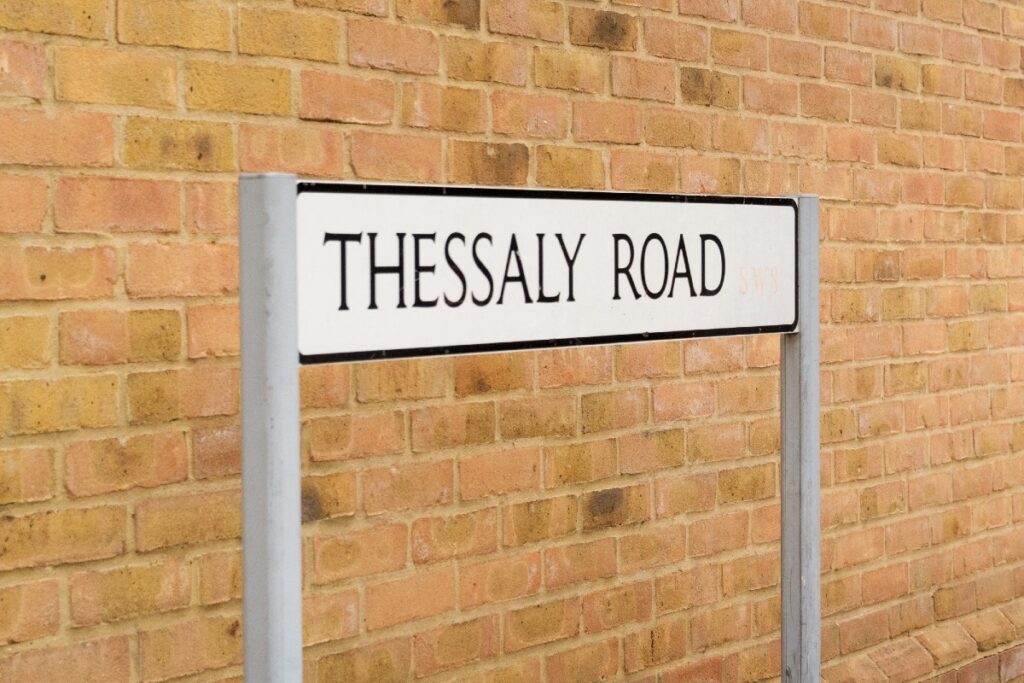 Nearby Thessaly Road started out as New Road, gaining its current name in 1871. Around this time, the Mediterranean region of Thessaly was handed back to Greece by Turkey.

Ascalon Street’s name refers to an ancient coastal city on the plain of Palestine, now known as Ashkelon and dating back to 2000BC.

The erstwhile York Street became Savona Street in 1871, named after the Italian seaport of Savona in the same year that the unification of Italy was completed.

Today’s New Mill Road, opposite the new Riverlight development, references the mills that once operated along this stretch of the river. Daniel Ponton ran a tidal mill here from around 1760 and acquired a large landholding south of Nine Elms Lane, much of which was later sold by his descendants to the London & Southampton Railway company. The family name lives on in nearby Ponton Road, running behind the US Embassy through to the Arch 42 railway underpass.

Patcham Terrace, now part of the Battersea Exchange development near Battersea Park Station, was originally called Brighton Terrace. Before redevelopment, it was a surviving remnant of terraced housing built for railway workers in the 1860s. It was renamed in 1937 to distinguish it from other streets named after the seaside town, Patcham being a district in Brighton.

Another nod to the impact of the railways on Nine Elms is found on the Patmore Estate, where most of the housing blocks are named after locomotive engineers. 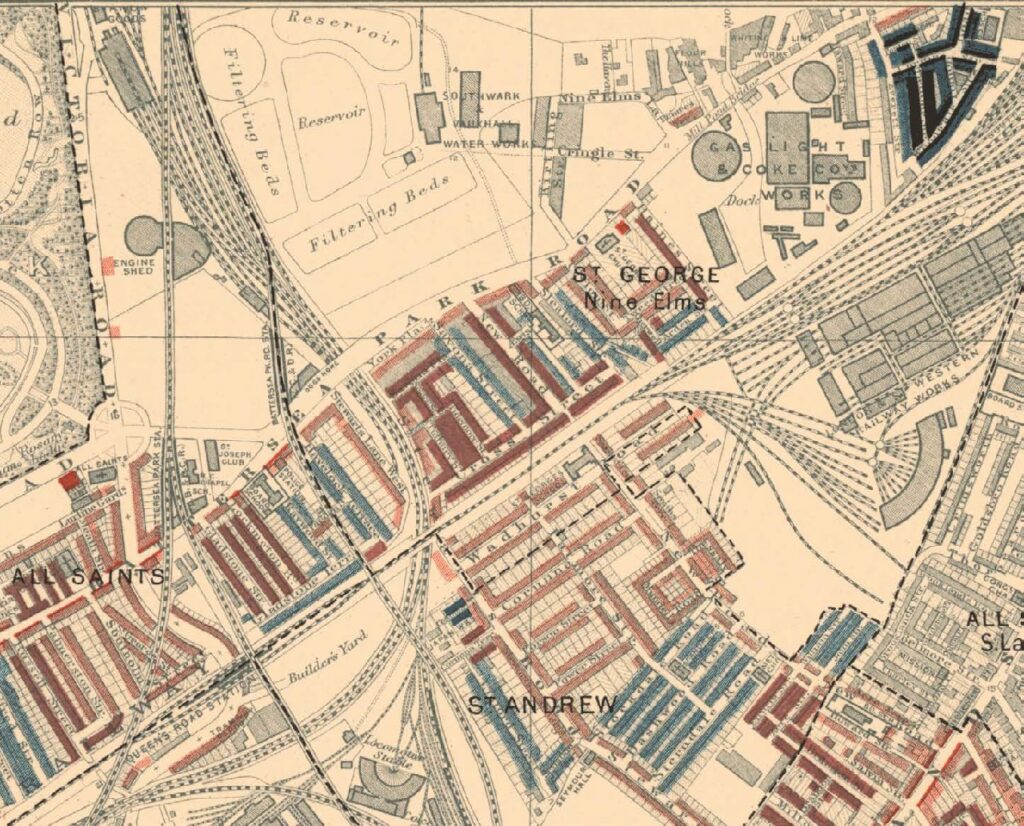 Looking back: Exploring the history of Battersea Barge