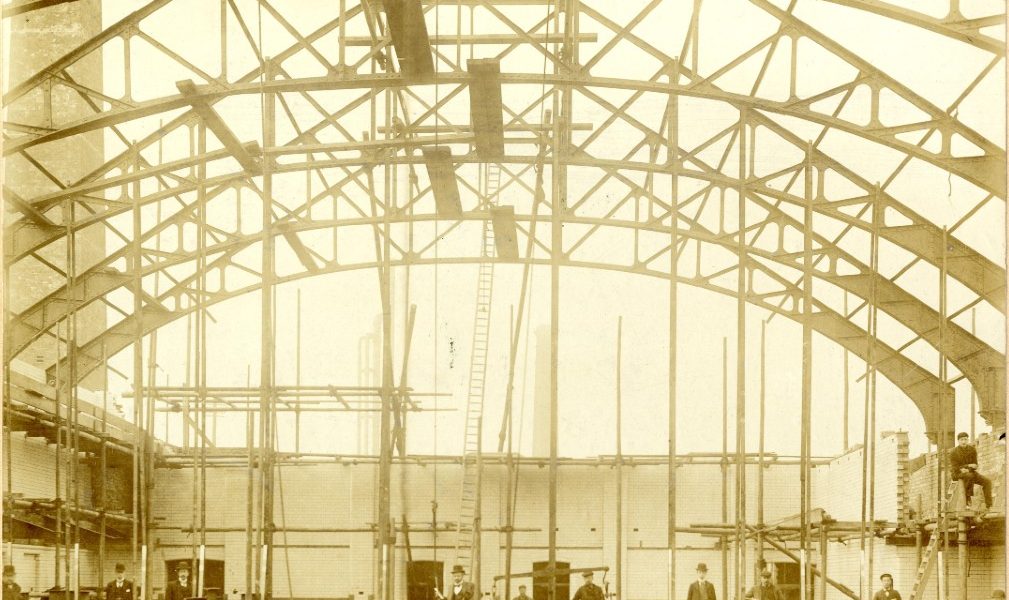 In the late 19th century and early 20th century, Nine Elms was a notorious slum. If you were poor and living in Nine Elms, keeping clean was a daily battle, as Battersea Society describes.

There were no laundry facilities, and most homes didn’t have bathrooms.

In an area dominated by pollution, even if you managed a household wash, there was nowhere to hang washing without it becoming ruined with industrial soot.

In 1895, the Battersea Vestry approved a proposal for public baths at Nine Elms. Soon after, a plot of land at the junction of Battersea Park Road and Cringle Street was acquired from the Southwark and Vauxhall Water Company.

The foundation stone was laid in 1899 by Battersea’s MP John Burns. It included the proud statement ‘Built by Direct Employment’.

The baths were opened on 20 April 1901. By then the cost had risen from the original estimate of £25,000 to a final estimated cost of £45,000. There were separate entrances on Battersea Park Road for the men’s and women’s slipper baths, which were freestanding bathtubs in separate compartments.

The swimming bath was 150ft long and 50ft wide, making it the largest covered swimming pool in the UK at that time.

In winter, the pool was covered over, and the hall used instead for meetings and entertainment for up to 1,500 people. The baths were a popular venue for the community with boxing matches and radical political meetings, it became known as the People’s Hall.

A celebrated historical figure associated with Nine Elms Baths, was none other than John Archer, London’s first Black Mayor who was President of the Nine Elms Swimming Club until his death in 1932.

Nine Elms baths also provided laundry facilities that could be accessed via Cringle Street. The facilities included a washhouse with 53 compartments each containing two troughs, one for boiling clothes and one for rinsing. There were also drying racks, an ironing room, a waiting room and ‘bonnet room’ and, unusually for the time, a crèche. The Builders’ Journal and Architectural Record reported that the washhouse corridor was wide enough for the ‘perambulators [prams] in which the linen was generally brought’.

Sadly, the bath house went into a long, slow decline. The balconies around the main pool were closed in the 1930s, and in 1956 the galleries were demolished due to structural defects. But it wasn’t until 1970 that the baths finally closed, with demolition taking place the following year.

The aims of the Society are to strengthen Battersea’s sense of identity and community, stimulate interest in its geography, history, and architecture, and to promote excellence in new developments whilst conserving the best of the past.

Keep up to date on the Battersea Society website, where you can find our quarterly magazine, Battersea Matters.