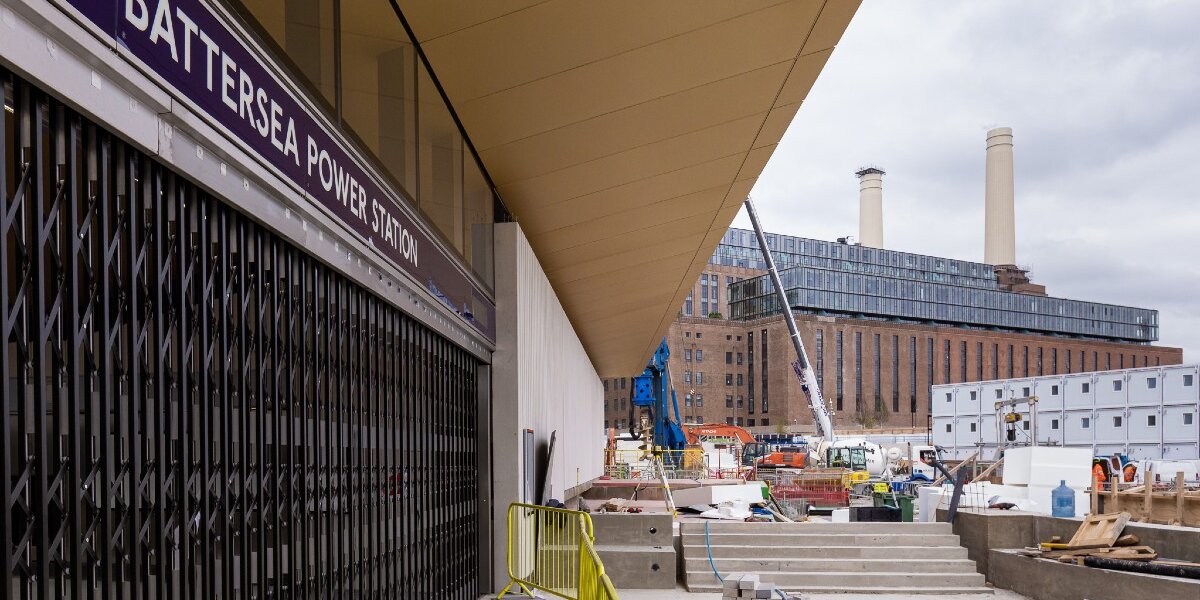 History is being made as the Tube is set to open in Battersea for the first time ever in the biggest extension of the London Underground for over 20 years.

Transport for London have now confirmed that the Northern Line Extension, with two new stations at Battersea Power Station and Nine Elms, will open on 20 September 2021. 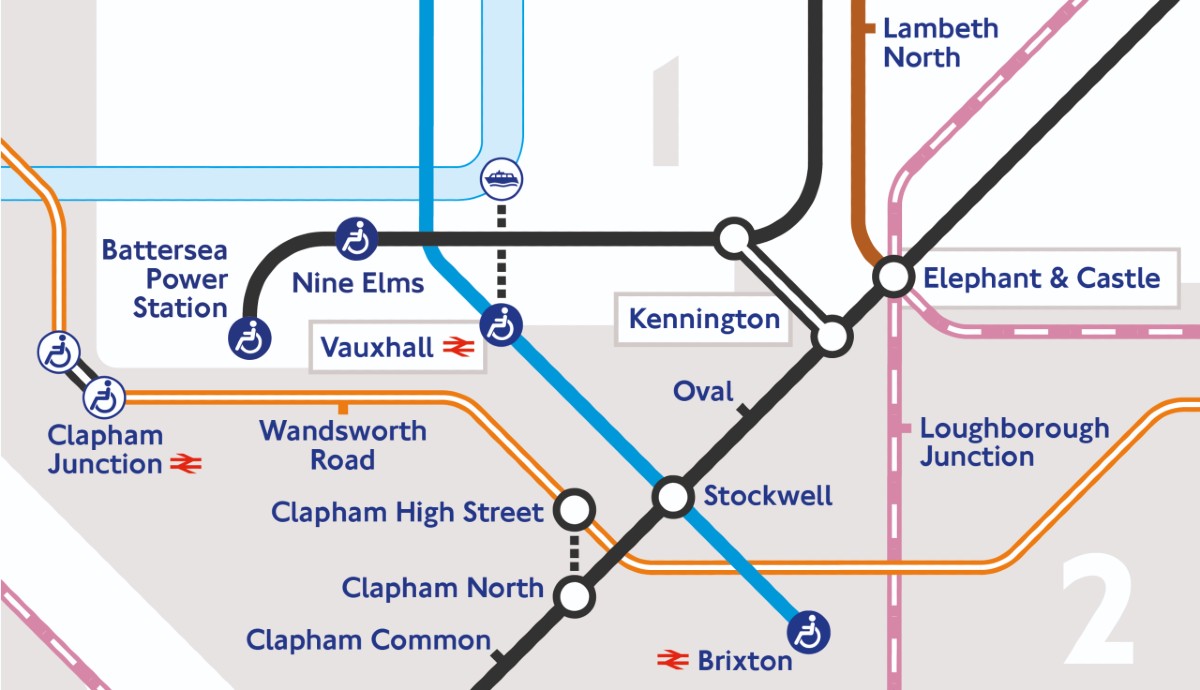 The news follows six years of railway construction to bring the Tube to Battersea, directly connecting it with central London and opening up the area for local people, businesses and visitors. The new transport connection is key for transformation of the area into a successful district of London.

In the first major Tube extension this century, the new line brings this growing riverside part of south London within 15 minutes of the West End and the City.

Councillor Ravi Govindia, Leader of Wandsworth Council and co-chair of the Nine Elms Vauxhall Partnership, said: “It is fantastic to finally have a date for the Tube opening in Battersea for the first time, bringing long-awaited new travel connections to the area.

“This huge £1bn transport investment to extend the Northern Line to Battersea Power Station and Nine Elms has been over 10 years in the making, so we are delighted that this growing Wandsworth neighbourhood is now firmly on the London Underground map.

“Our leadership and resolution with partners including TfL, GLA, Lambeth, Battersea Power Station and all local developers to transform the area from a transport backwater to a thriving centre for homes and jobs will bring benefits and opportunities for all our residents and businesses for decades to come.”

The new connection will help boost the capital’s recovery from the pandemic, underpinning the transformation of this part of central London from former brownfield industrial land into a new centre with 25,000 new jobs, 20,000 new homes and 6.5m sq ft of office and commercial space. In addition, construction of the extension boosted the UK economy and supported around 1,000 jobs, including 79 apprenticeships.

Despite the challenges of the pandemic, the construction project has stayed on track for an autumn opening. 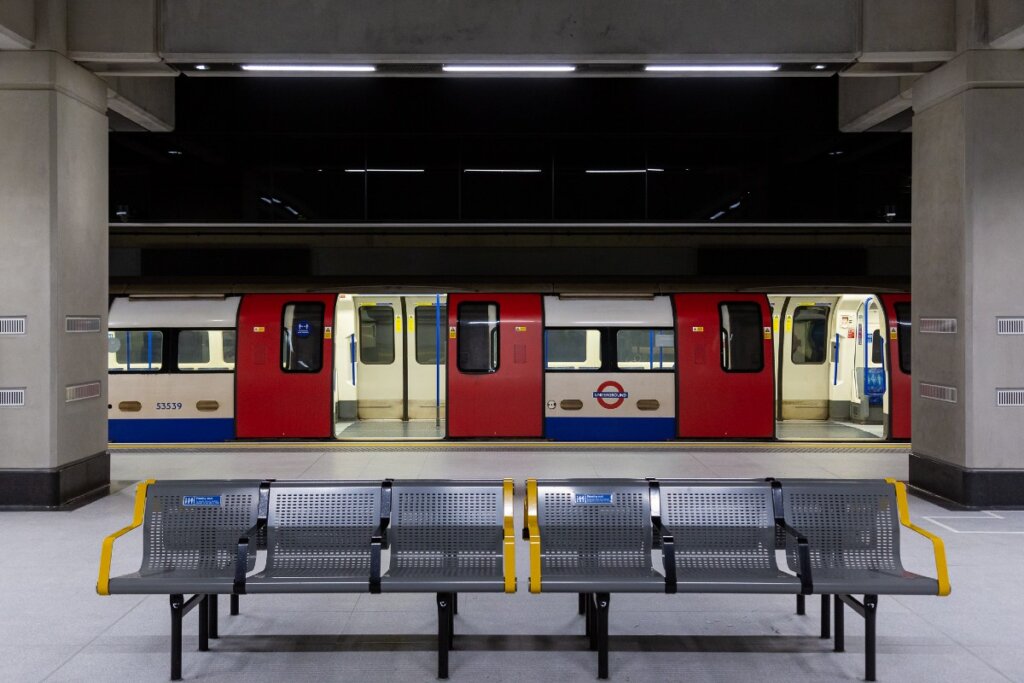 Sadiq Khan, Mayor of London, said: “After an incredible effort from the huge number of people who worked on this project, it’s fantastic that we are now on the final countdown to the Northern Line Extension opening later this month.

“The two new stations at Nine Elms and Battersea Power Station are the first new stations on the Northern line for 80 years. They will hugely improve connectivity between these two areas and the rest of London, and play a major part in the capital’s recovery from the pandemic by supporting thousands of new jobs, homes and businesses.” 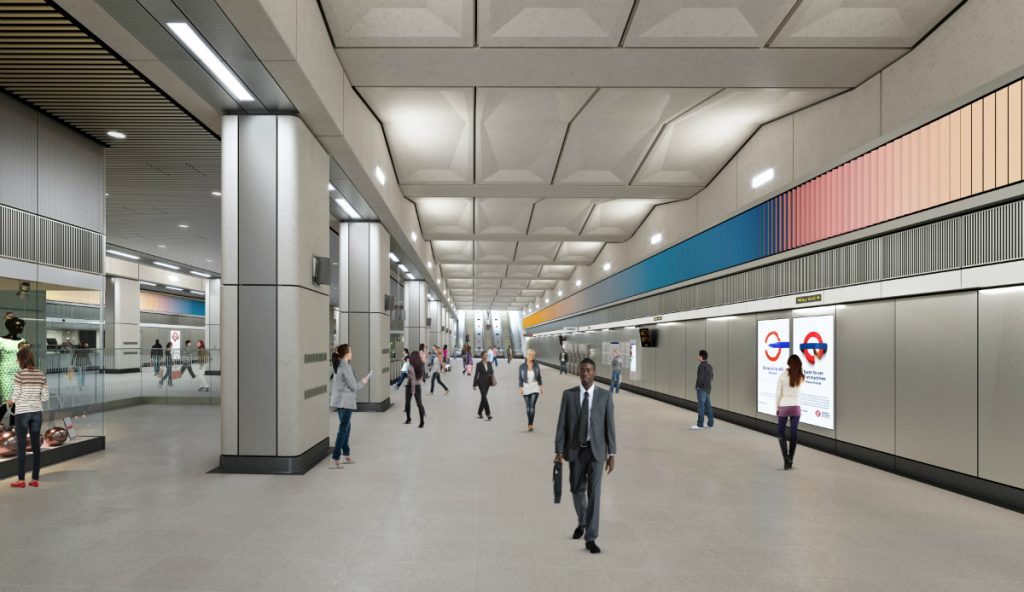 Work is also nearing completion on Art on the Underground’s major new permanent artwork by London-based Brazilian artist Alexandre da Cunha, which is being installed at Battersea Power Station Underground station ahead of the launch.

The Grade II* listed Battersea Power Station will open its doors to the public in 2022. It will house over 100 shops, restaurants and cafes, a 1,400-person capacity events venue, a unique chimney lift experience offering 360-degree panoramic views of London’s skyline, new office space, 500,000 sq. ft of which will be home to Apple’s new London Campus and 254 new residential apartments.

Simon Murphy, CEO of Battersea Power Station Development Company, said: “We are delighted to have played a key role alongside TfL, Wandsworth Council and the Nine Elms Vauxhall Partnership in delivering the first major extension to the London Underground in nearly 25 years. The Northern Line Extension is a gamechanger for this area of London and an extremely significant milestone in the regeneration of Battersea Power Station, which is soon to be one of the most well-connected developments in the capital. We look forward to welcoming further visitors to the thriving riverside neighbourhood we are creating once the new Battersea Power Station underground station is open on 20 September.” 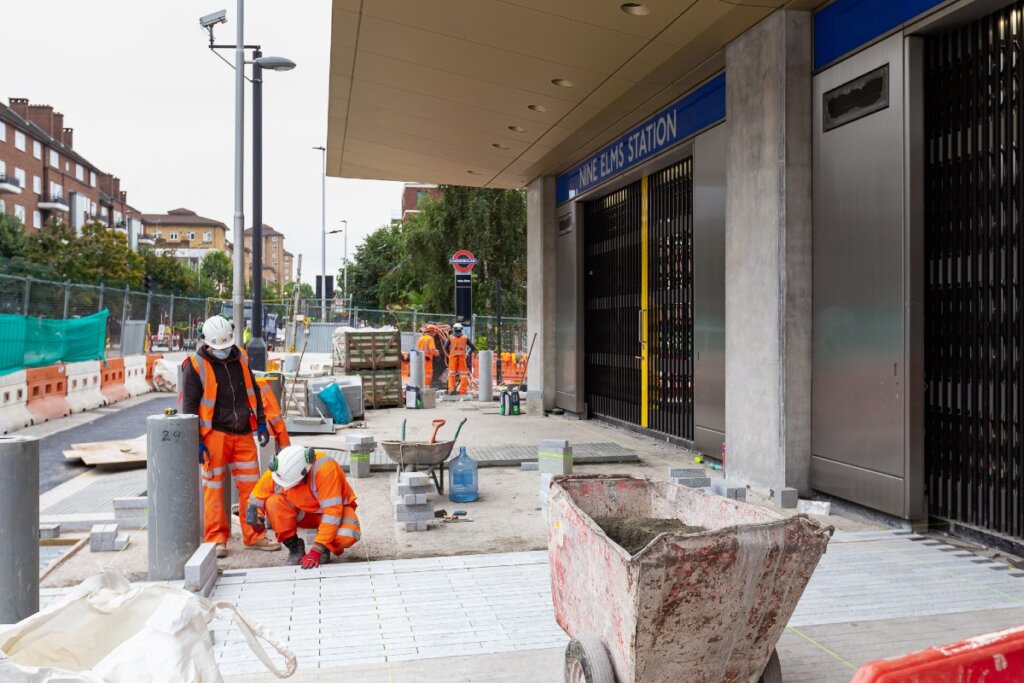 Stuart Harvey, Director of Major Projects at TfL, said: “In just a few weeks’ time, we’ll be opening the first major Tube extension this century and welcoming our first customers to the new stations at Nine Elms and Battersea Power Station. It has been a huge collaborative effort with our London-based stakeholders and suppliers from around the UK. It’s going to be a fantastic moment when this thriving south London neighbourhood makes it onto the Tube map for the first time, which will also highlight the vital importance of public transport in connecting communities and assisting London in its continuing recovery from the pandemic.” 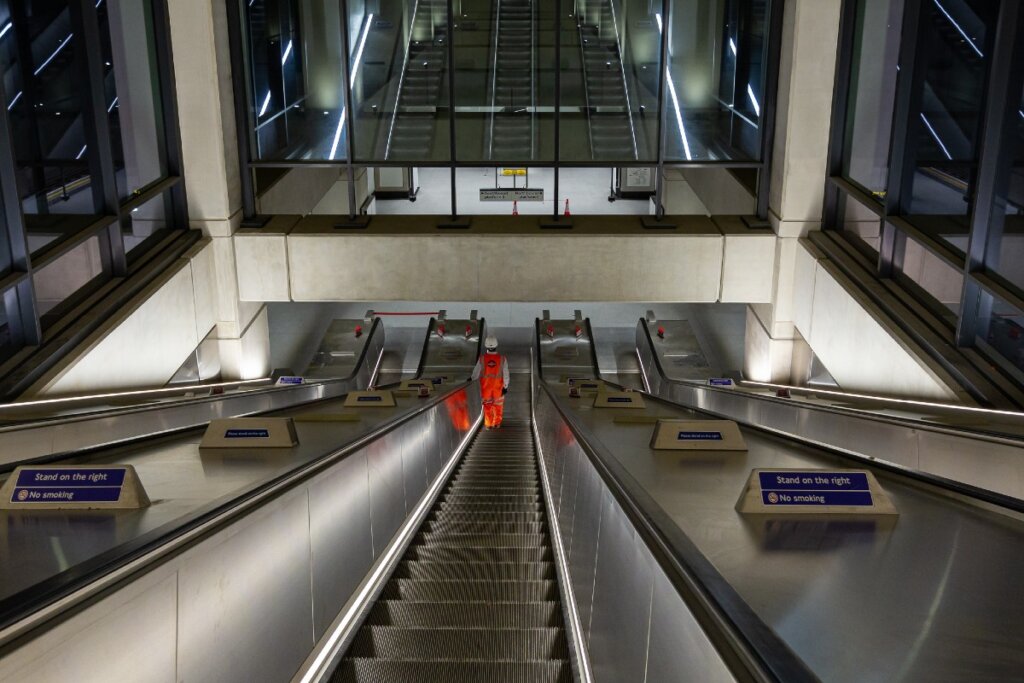 David Darcy, Project Director for the Ferrovial Construction Laing O’Rourke joint venture, FLO, said: “FLO has designed and constructed a crucial transportation system asset for London, which comes into service as the city’s post-pandemic recovery begins. A project of this scale and complexity, with the challenges posed by COVID-19, has been a joined-up effort on so many fronts, proving the benefit of close collaborative working across the entire project at all levels. We are grateful to our supply chain and delivery partners and the local communities. Importantly, the NLE comes into service with an industry-leading safety performance and, underpinned by the culture of the project team and integrated delivery approach, has set a new standard for delivering major and complex transportation schemes for the UK.” 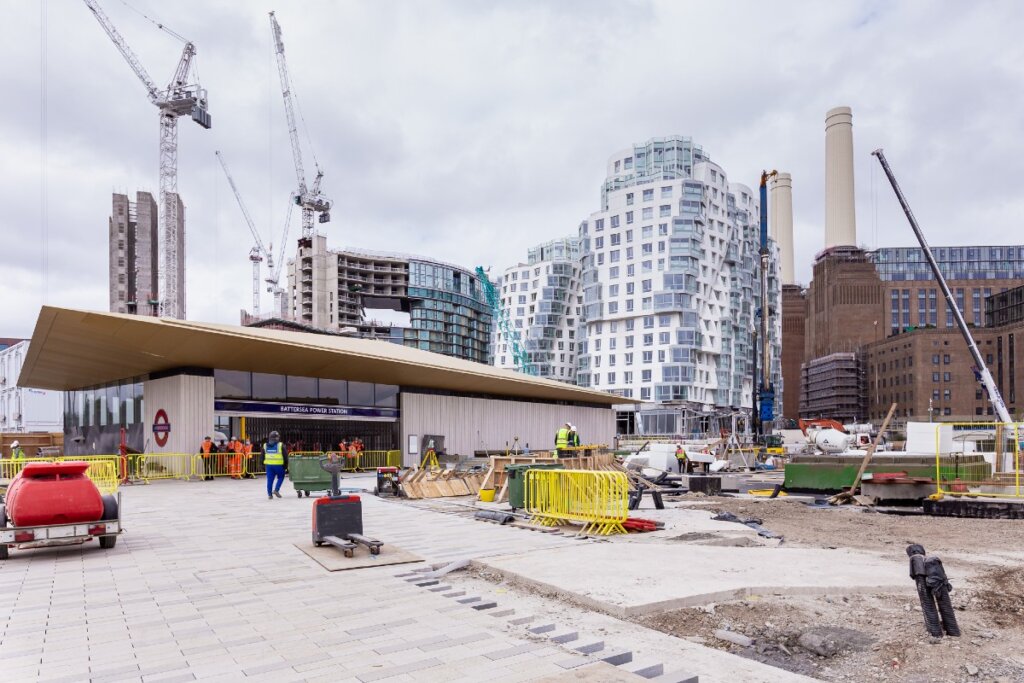 Transport for London is also working with Wandsworth Council and the Nine Elms Vauxhall Partnership to deliver a number of schemes making it easier for people to walk, cycle and use public transport in the Nine Elms and Battersea areas that are also nearing completion. These schemes include new pavements, seating and signage, tree planting and increased cycle parking.

They also include the opening-up of a Victorian railway arch in Nine Elms, known as Arch 42, to create a vital new walking route between Nine Elms station, Nine Elms Lane and the River Thames. Santander Cycles are also available to hire across the Nine Elms and Battersea area.