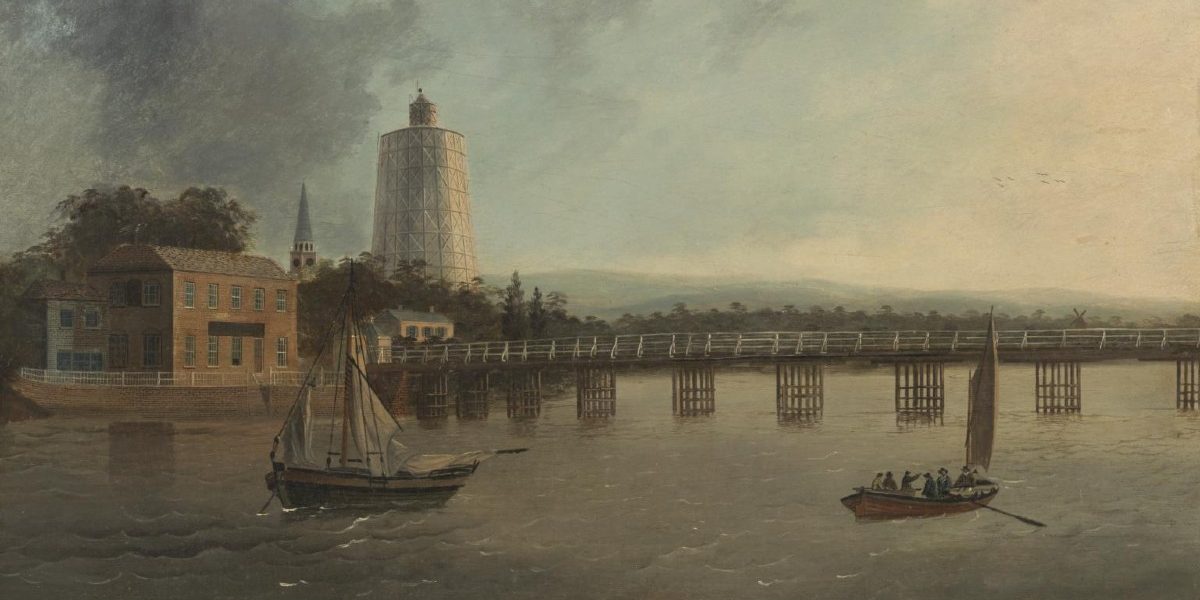 Battersea Power Station once generated 20 per cent of London’s electricity, but it was not the first power-producing landmark on the waterfront. That honour goes to the extraordinary Horizontal Windmill, erected in 1788 next to St Mary’s, the parish church for Nine Elms and Battersea situated on today’s Thames Path, as Battersea Society describes.

Nine Elms had long been noted for its windmills, which processed both corn and white lead and colour. These mills had traditional vertical sails mounted on a horizontal shaft, but the Horizontal Windmill which towered over the waterfront was quite different. It had no external sails but comprised a 120 feet high cylindrical structure containing over 90 perpendicular boards, which operated rather like venetian blinds.

This enormous ‘air-mill’ was first used for grinding linseed, then corn and malt for the nearby distillery, but it unfortunately proved inefficient and required frequent repairs. The generation of wind power ceased after 1825 and in 1849 the whole structure was removed. But in its short life the mill attracted considerable controversy!

In his Curiosities of London (1855) John Timbs recounts one myth about the Horizontal Windmill. “When the Emperor of Russia was in England he took a fancy to Battersea Church and determined to carry it off to Russia, and had this large packing case made for it; but as the inhabitants refused to let the church be carried away, the case remained on the spot where it was deposited!”

In the 18th century Nine Elms was still part of the Manor of Battersea whose seat was Bolingbroke House – right next to the site of the Horizontal Windmill. In the 1740s it had been home to the famous politician and philosopher Henry St. John, 1st Viscount Bolingbroke. The idea that Bolingbroke’s home had become the site of an industrial windmill horrified one former visitor, who wrote in 1817:

“This house, once sacred to philosophy and poetry… is now appropriated to the lowest uses! The house of Bolingbroke become a windmill!.. yesterday, this spot was the… seat of enjoyment of Bolingbroke, Pope, Swift… (now) vanished; while in their place I behold hogs and horses, malt-bags and barrels, stills and machinery!”

The Horizontal Windmill lasted only a few decades, but its unique design symbolised the progressive approach to power generation along the Nine Elms and Battersea waterfronts which was to pave the way for the following Industrial Revolution and London’s industrial heritage.

The aims of the Society are to strengthen Battersea’s sense of identity and community, stimulate interest in its geography, history, and architecture, and to promote excellence in new developments whilst conserving the best of the past. The Society organises talks, social events, walks and visits, and publishes a quarterly magazine, Battersea Matters.