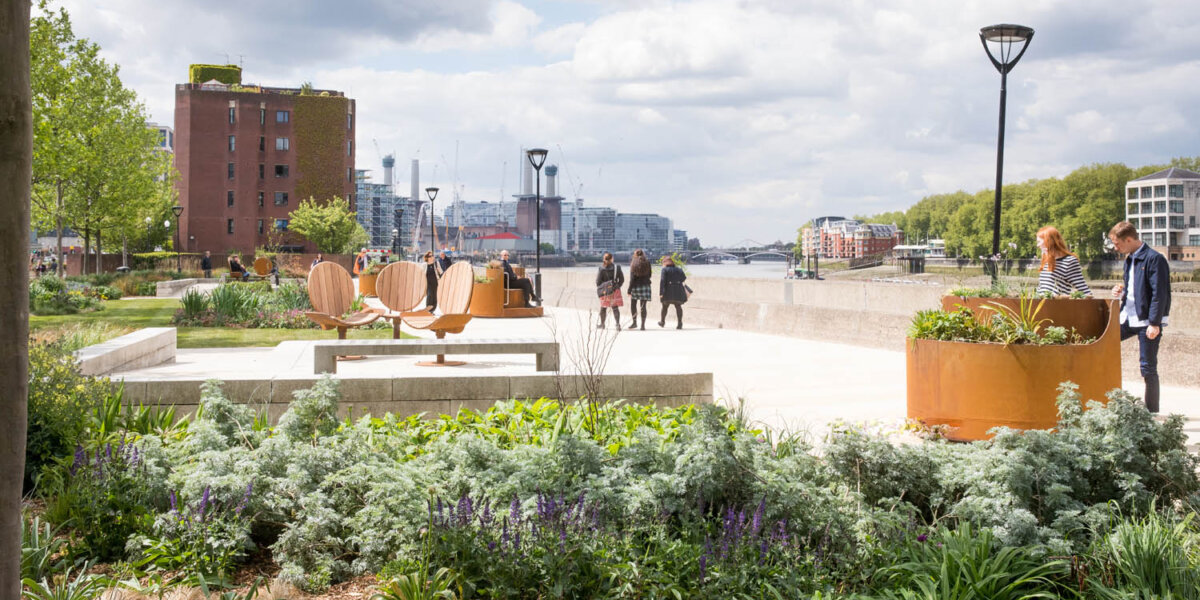 A new stretch of the Thames riverwalk is starting to emerge in Nine Elms as more of the old industrial South Bank is opened up to the public and brought to life with new arts installations.

The project, led by Wandsworth Council and funded by private development, focuses on roughly 500metres of waterfront along Nine Elms Lane between Heathwall Pumping Station in the west and the new Riverside Gardens ‘pocket park’ in the east.

This upgraded part of the South Bank, masterminded by Churchman Landscape Architects, includes new interactive seating by leading designer Tord Boontje entitled Dawn to Dusk.  The permanent commission is inspired by one of artist JMW Turner’s favourite painting locations, and is being unveiled as part of the area’s wider Chelsea Fringe 2017 programme.   The new seating allows people to enjoy their chosen view of the Thames, potentially tracking the sun from sunrise to sunset, whilst enjoying scented planters, which include drought tolerant plantings,  Acanthus, Penesetum, Agapanthus, Kniphophia (Red Hot Poker), Fragaria (Strawberry) and Tulbhagia (Society Garlic).

A little further west a new pavilion, designed by Studio Weave and incorporating artwork by textile designer Linda Florence, is being built close to Bourne Valley Wharf.  The pavilion will provide another new cultural space for the area to add to Pump House Gallery, Beaconsfield Gallery Vauxhall, Gasworks and StudioRCA, and will be home to a programme of arts activities throughout the year.

Ornate copper-coated planters are also being installed and the riverside’s paving is being replaced with a combination of York Stone and Cornish De Lank granite.

Over the next 10 years almost the entire stretch of the Thames river path from Battersea Park to the Albert Embankment will be renewed as more former industrial sites make way for public open space, homes, pubs, shops and cultural venues. New riverside spaces have already been created at Riverlight, Riverside Gardens and Battersea Power Station which have been off limits to the public for generations.

The long term aim is to create a joined up, green and walkable route along the Nine Elms and Vauxhall riverside, lined with new parks and attractive public squares.

The latest phase of work to the riverside is well underway and will be complete over the course of this year. The pathway is closed to the public in some areas while work is carried out and the riverwall is reinforced.

Plans are already well advanced for the next phase of the riverpath revival, focusing on the stretch between Chelsea and Grosvenor Bridges and the approach to Battersea Power Station’s first phase, Circus West Village. Plans will be released for consultation later this year.