Since the first pour on May 14th 2015, nearly 25,000 wheelbarrow loads of concrete have been hand-poured into the chimneys that each stand 51 metres tall.

Rather than use a hose to pour the concrete, it was decided to replicate the original construction methods and 680 tonnes of concrete was lifted in a hoist to the top of the chimney, transferred into wheelbarrows and then hand poured into the structures.

The rings that can be seen around the new chimneys, and that could also be seen around the old ones, are formed by using a ‘Jump Form’ shuttering method. Using steel and timber, the metal rings are filled with concrete then moved up and filled again.

Overall, the hoist has travelled the equivalent of 21 miles, lifting the concrete to the eight workers waiting on boards high above the ground.

The original chimneys, two were built in the 1930s and the second pair in the 1950s, had to be demolished as they were deemed unsafe because they were badly crumbling after so many years.

The rebuilding of the chimneys won a prestigious award from the London Civil Engineering Award at a ceremony last month.

The north-east and south-west chimneys will still be used as chimneys for the new energy centre that will provide heating and cooling to the development with water vapour being released from their flues.

The north-west chimney is the last to be finished. 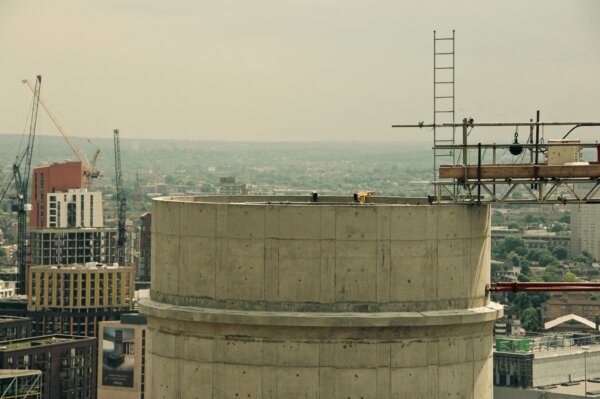 Rob Tincknell, CEO of Battersea Power Station Development Company, said:
“Battersea Power Station’s chimneys have been the backdrop for films, music videos and album covers and really are world famous. On behalf of our shareholders, I would like to say it has been an honour to restore this iconic symbol to the London skyline so that it can be enjoyed by generations to come.”

Cllr Ravi Govindia, Leader of Wandsworth Council, said:
“These giant chimneys are recognised the world over and as the local planning authority we have a profound duty of care to make sure the rebuilding process is a success. The site’s owners have understood their significance from day one and have gone to great lengths to restore them to their former glory. And delivered on their promises.”

Emily Gee, London Planning Director at Historic England, said:
“Historic England welcomes this final stage of the rebuilding of the chimneys, ensuring that the Power Station will retain its landmark status along this evolving part of London’s skyline.”

The Malaysian shareholders of the Battersea Power Station project are committed to give back to the communities in which they operate. They recognise the importance of creating shared value and this is embedded in all of their undertakings to ensure that they contribute towards building a harmonious and considerate community.