As part of Wandsworth Art’s LGBT+ History Month programme, artist Nina Wakeford writes about the vibrant history of LGBT+ culture in Nine Elms and her hopes for its future.

“It felt like it was in the middle of nowhere.”

“You approached it, and it seemed really bare all around it.”

“‘Cos you had that little walk from the Underground and you didn’t quite know where you were going. And then, there it was. And you went up the step.”

“It was the only place you ever went up the steps, wasn’t it?” 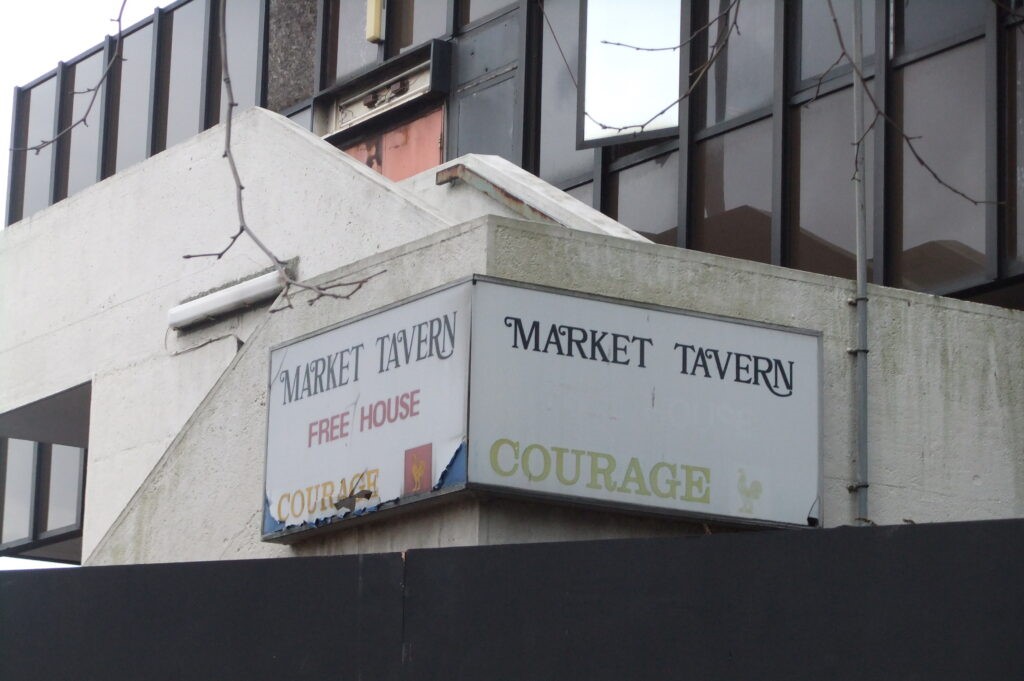 The Market Tavern kept being mentioned during the interviews I held as part of my research into LGBTQ+ life in Nine Elms in the 1970s–80s. Located at 1 Nine Elms Lane, this long-gone gay venue was once found on the raised ground floor of the Market Towers, a building opened by the Queen in 1974. Completely unlike any other gay club or pub at the time – often located in basements or in dark back rooms – if you frequented the Market Tavern you ascended steps from ground level. This may sound insignificant now, but the fact that people remember the space in this manner speaks to the ways in which gay subculture was embedded in a literal or metaphorical ‘underground’ at that time.

The interviews were part of a project in which I was researching both underground LGBTQ+ subcultures and the Underground. During 2018–2019 I was embedded, as part of an Art on the Underground commission, with the engineering and mining teams building the new Northern Line Extension.

I collected and made new art from materials I gathered along the new track’s route, investigating both the gay clubs (now mostly gone) on the surface level, and amassing sounds and objects from the large engineering project going on beneath. Spending whole nights under Nine Elms as the new rail was cemented and fixed into place, I heard the flamenco songs ‘of our grandmothers’ which Spanish teams sang as they banged each individual raclip into place. Talking to long-serving LGBTQ+ Transport for London staff in the Northern line depots, I heard about informal ‘pink depots’ in the 1970s and 1980s. These were stations on the TfL network that had a reputation for large numbers of LGBT drivers, guards, and managers.

The idea started forming in my mind that the space under Nine Elms and Battersea, from which 850,000 tons of ‘muck’ were extracted, should be offered back to the area as a new LGBTQ+ space – a new ‘pink depot’. This became the premise of the book that I produced, alongside posters and a performance (at Matt’s Gallery), for the commission, titled Our Pink Depot: The Gay Underground FLO-N202-236000000-TRK-MST-00002-SAY-HELLO-WAVE-GOODBYE-KEN-NIE-BPS.

At the heart of it all, the stories of the Market Tavern, and the lives it brought together, felt increasingly important. For not only was it a gay club (mostly associated with the ‘leather’ scene), at which the Readers Wifes and the Divine David tried out the first London Northern Soul night (wittily called ‘Wig’n’Casino’), but the pub also attracted the workers for whom it  had originally been built – porters and market tradespeople from New Covent Garden Market. The Market was directly attached via a bridge. After dropping off money at the banks in the Market Towers, punters could meet and drink together from 5am – not long after the gay clientele had left. And sometimes, inevitably, there were overlaps – and many amusing anecdotes were offered when this happened! 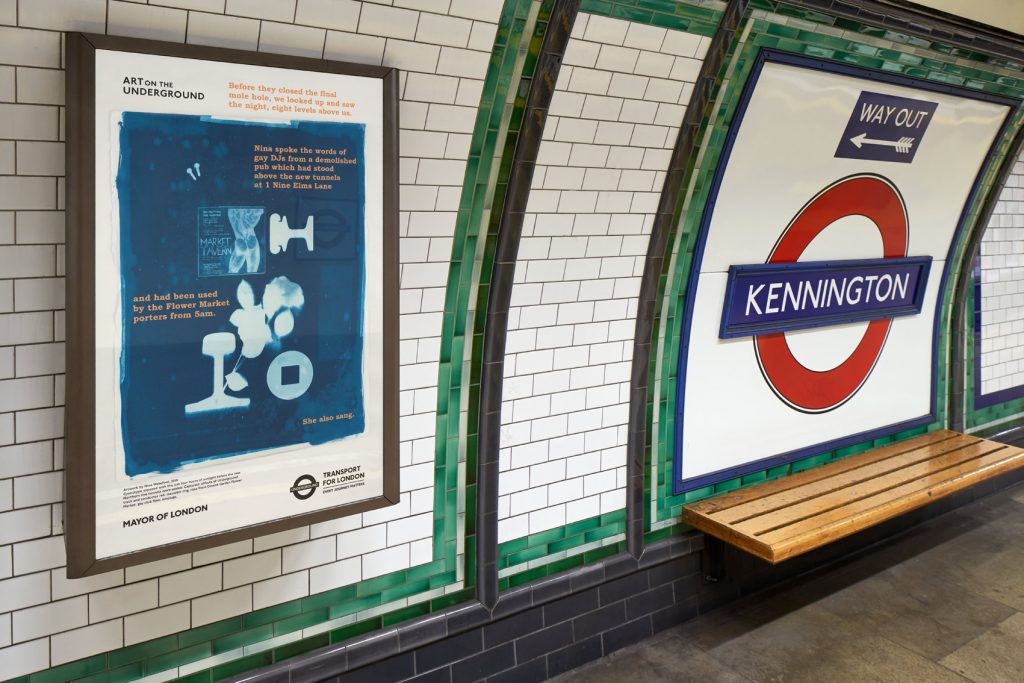 My posters for Art on the Underground, which were shown up and down the Northern Line, were printed as the last hours of light reached the bottom of the tunnels-under-construction. I printed them by placing items of historical interest on the paper and using the cyanotype method of image making. In recognition of the linked histories in the Nine Elms area I placed adverts for the Market Tavern, flowers bought from the Market, and then arranged some of the railway fittings: insulator rings and an offcut of the track that the trains will run along. 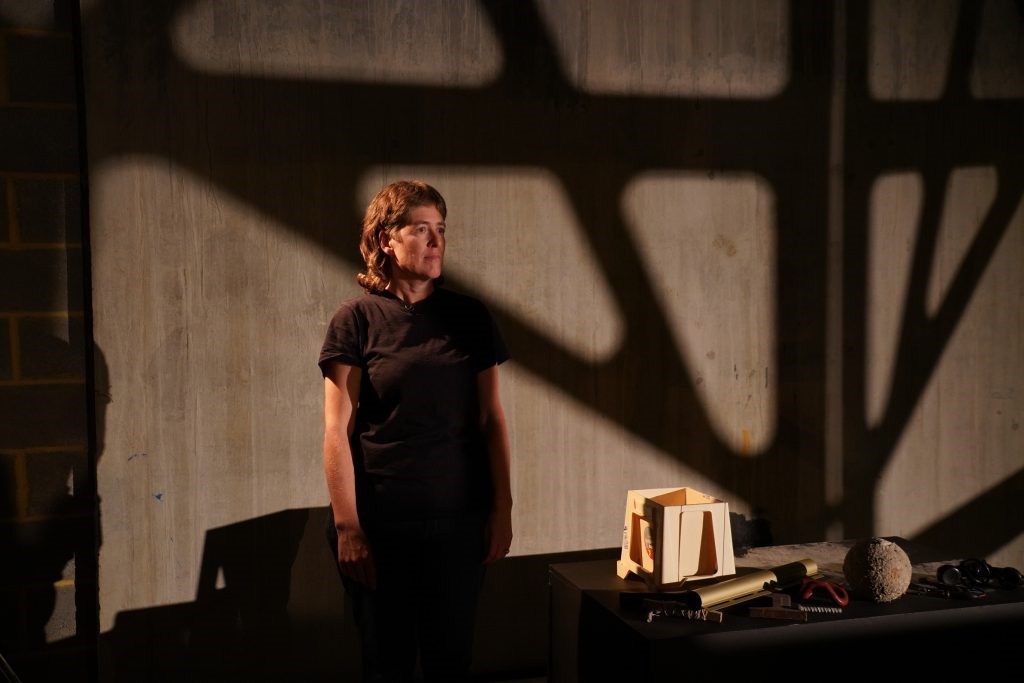 One of my proudest achievements – my attempt to make some LGBTQ+ history – was to enable current Northern Line LGBTQ+ staff to be the first drivers to enter the tunnels. Together we walked the route along which passenger trains will run. As we walked I offered the group of drivers four performances using the words of the Market Tavern DJs whom I’d interviewed. I’d also asked the drivers to choose some tracks that I could play as we walked. Amongst others throbbing through the tunnels from a 1990s boombox were: Lil Louis French Kiss, Foo Foo Lamar Around the Old Camp Fire, The Animals House of the Rising Sun, Family Stand Ghetto Heaven, Maria Vidal Body Rock, Evelyn Thomas High Energy, Prince Computer Blue, Lighthouse Family Lifted. I still hope this historic trackwalk will be marked in some way above the surface. This would provide a way for those who live in the neighbourhood to encounter the new ‘pink depot’ in operation beneath their homes. 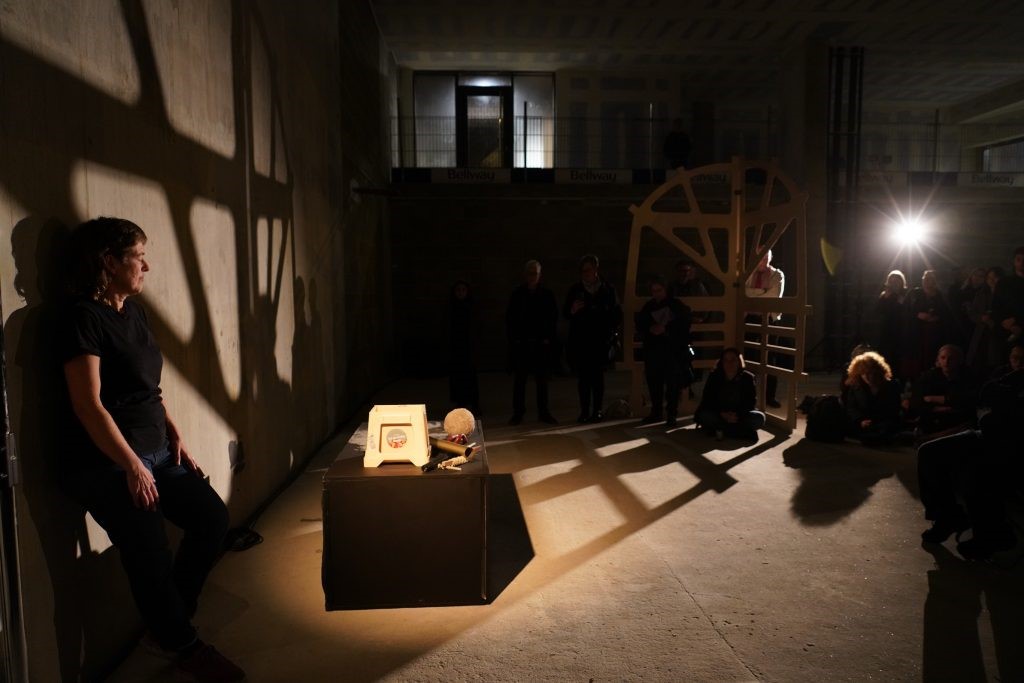 Nina Wakeford (UK) is an artist based in London. Her work is often stimulated by the unfinished business of past social movements, and the challenges of revisiting and re-amplifying the energies that these movements created. Exhibitions include Focal Point Gallery, Southend; Glasgow International, Science Gallery London, The Barbican and Art on the Underground. She is the author of Our Pink Depot: The Gay Underground FLO-N202- 236000000-TRK-MST-00002-SAY-HELLO- WAVE-GOODBYE-KEN-NIE-BPS (published by Book Works in association with Art on the Underground, 2019). She is currently undertaking a commission for Stevenage Borough Council. Whilst producing ‘Our Pink Depot’ Nina was Senior Tutor in Contemporary Art Practice and Reader in Contemporary Art at the Royal College of Art. She now convenes MA Visual Sociology at Goldsmiths.