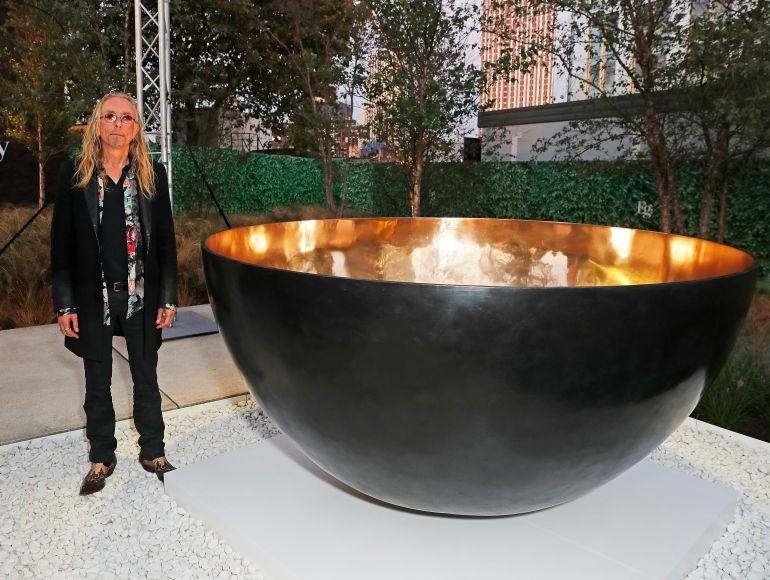 This week, an evocative new sculpture, the first in the UK by the influential Irish artist Guggi, has arrived at Embassy Gardens.

The new bronze sculpture, titled ‘Rice Bowl’, measures 106×201 cms and was specially commissioned by Ballymore’s Chairman and CEO Sean Mulryan to be situated alongside other pieces already in place at Embassy Gardens.

Those works include Florian by British artist Sarah Lucas, a marrow shaped sculpture inspired by the development’s proximity to New Covent Garden Market, and Modern Marriage, by rising British-Japanese artist Simon Fujiwara, comprising a large foot with a ring embedded in the sole.

“I have a longstanding admiration for Guggi’s work and we are delighted that his creativity is now built into the fabric of Embassy Gardens.

“Culture and the arts are the foundation stones of our vision for Embassy Gardens, from the visual pieces on show today to music and dance that brings whole communities together.”

‘Rice Bowl’ is a deeply reflective work, inspired by the artist’s humble beginnings. It’s a must-see piece, visit Embassy Gardens and tag us in your pictures!

The reveal event partnered with Harper’s Bazaar and brought together a number of big names, including actress, Naomie Harris, designer John Rocha OBE, Dolce and Gabbana runway models, Viscountess Weymouth and Lady Kitty Spencer amongst others.

The event to mark the sculpture’s arrival – part of Bazaar Art Week – came just ahead of the opening of Frieze London and Frieze Masters, so was buzzing with a strong arts and culture milieu. People enjoyed a menu by celebrity chef Robin Gill with musical accompaniment by Anna Wolf, a new singer/songwriter signed to Three Bears Entertainment, and World Heart Beat Music Academy – Embassy Gardens’ latest tenant. The evening was concluded with a DJ set from Josephine De La Baume, the French actress, singer, director and model.