On Saturday 7 July 2018, Art Night and Southbank Centre’s Hayward Gallery will transform the Thames riverbank with new commissions, one-off artist projects and premieres with Nine Elms on the Southbank. Nine Elms, a new cultural destination for London, are pleased to host a range of projects for the event, including large scale installations, performances, collaborations with international names such as Jeremy Deller. There will also be work with local arts communities, including site specific installations created with artist Ben Judd and people living on the Doddington Estate, as well as a special performance event at the Nine Elms Pavilion. Families and anyone not up for an all-nighter can also see a selection of work during daytime hours, with several sites and venues along the trail re-opening on Sunday 8 July from 11am–6pm. 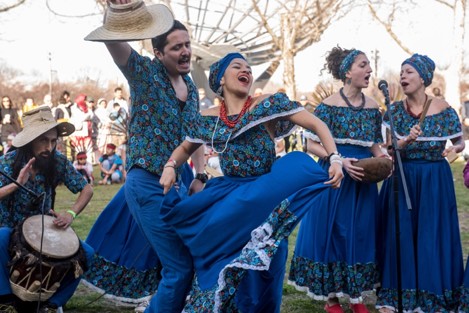 The 2018 trail runs along the Thames, including at Southbank Centre, through Vauxhall and Nine Elms, and to Battersea Power Station. Art Night 2018 is curated by the Hayward Gallery team, to coincide with the London institution’s 50th anniversary, and supported by auction house Phillips for the third year running.

“Art Night 2018 is a wonderful opportunity for a range of community partners, artists and local creatives to work together and with the Hayward Gallery to deliver thrilling art projects across the 227-hectare Nine Elms area. The artwork will complement our iconic and unique buildings including the Battersea Power Station, US Embassy and New Covent Garden Market. The event also shows that we have the commitment to build on our cultural ambitions for Nine Elms and we’re looking forward to welcoming visitors who can see for themselves the new and exciting ways that the area is changing.”

This Place is the result of the second collaboration between Jeremy Deller and the South-London based Melodians Steel Orchestra UK, following the video English Magic (2013), which was conceived as part of Deller’s exhibition for the British Pavilion at the 55th Venice Biennale.

I poveri sono matti is a red and blue caravan suspended thirty metres above the ground by crane. A recording of the popular polka song ‘Rosamunde’ resonates from the caravan’s interior to the street below. The work is inspired in part by research gathered during a three month journey to Rajasthan where the artist met with different local castes, including ‘the Untouchables’. It also references her acquaintance with the nomadic Italian Piccaluga family – the original owners of the caravan – who work in the circus. The apparition of the caravan against the sky highlights the fierce creativity and imagination at the heart of the communities she has met. The work’s title is borrowed from a novel by Italian writer Cesare Zavattini. The final destination of the caravan will be a private burning, with the remains kept as a relic of the piece.

Taking place on the one night per week that the nocturnal flower market is closed, Henderson’s performance replaces the trading activity of wholesalers and buyers with a cast of eight characters. Their slow procession through the corridors of the shuttered market is a choreography that evolves according to an inverted, nighttime clock. Constructed from materials found at the flower market, each character is conceived as a sculpture for the body to be inhabited and articulated; its voice amplified. The characters derive from aspects of the life-cycle of the plants and flowers, from their origins in seeds to the elemental sources of light, earth and water, incorporating symbology and language as well as the frenetic activity of the florist.

The London Procession will begin at Battersea Power Station and move north throughout the night culminating in a finale at the Hayward Gallery.  This large-scale participatory performance, devised specifically for Art Night, takes its inspiration from public ceremonies, civil and religious rituals, working class gatherings, mass events and street musicals. Merging forms of protest, dance, music, theatre and sporting activity within a temporal framework of celebration, Senatore’s work highlights the emancipatory power of communal creative processes. This is especially relevant in the context of new urban developments and the impact of collective formations on the social history of places and communities.

Happily Contained is Miao Ying’s first work using virtual reality technology. Installed in the show apartments for the Embassy Gardens development in Nine Elms, Miao’s VR experience is conceived as a form of ‘lifestyle hypnotism’, casting the viewer as consumer on a journey in search of utopia and contemporary ideas of home. From post-war suburban American tract housing to Chinese ghost cities, Miao investigates the construction of identity and desire.

Ben Judd presents a participatory site-specific installation in the heart of an existing community. Five temporary, reusable domes will be built in the rooftop gardens of Doddington Estate, Battersea. The work will interact directly both with visitors and the local community by inviting them to help complete the domes’ construction, working alongside architectural practice EVA Studio. Participants can inhabit the domes for Art Night, eating a meal made from locally-sourced ingredients; the spaces will also facilitate discussions around the subjects of community and the urban landscape. By exploring notions of identity, community, engagement and estrangement, this work will actively encourage participants to examine the diverse ways in which social groups can develop.

Rhythm Series, Work No. 6 at the Nine Elms Pavilion

Dori Deng and Meta Drcar present an ongoing live performance within a sculptural installation at  the new Nine Elms Pavilion by Riverside Walk. Rhythm Series, Work No. 6 is a progressively changing  performative sculpture that explores the rhythm parallels between body movement, sculptural objects and surrounding landscape. The ideology of modern urban landscape is to re-arrange the environmental structure, social behaviour and aesthetic  through an efficient schematic. The artists  are interested in this temporal alteration of nature and public space in the urban landscape, and its exchange to the rhythm of the surrounding architecture in the rapidly changing dynamics of Battersea

For the full programme of events taking place across Nine Elms visit http://2018.artnight.london

Art Night is supported by public funding from the National Lottery through Arts Council England.

Art Night would like to thank its 2018 Partners and Supporters: