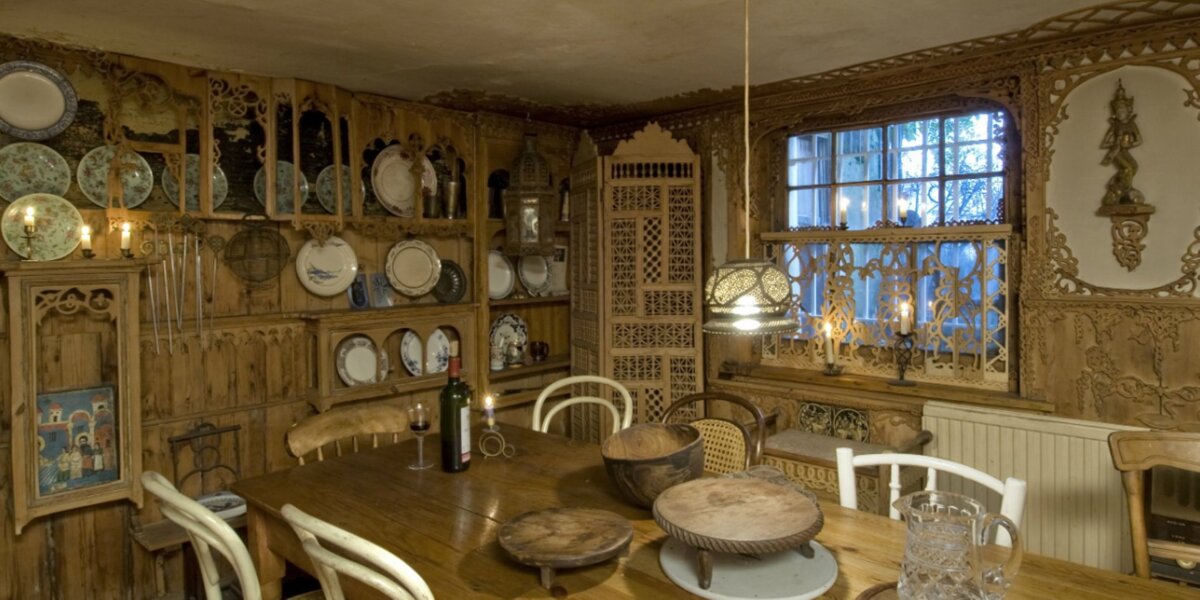 Did you know Nine Elms has a National Trust site?

One of only three in Central London (alongside the George Inn near the Shard and Carlyle’s House in Chelsea), 575 Wandsworth Road is an extraordinary National Trust house and a remarkable work of art.

The Georgian terraced house was the property of Khadambi Asalache (1935 – 2006), a Kenyan poet, philosopher, novelist, and civil servant who left the home to the National Trust in 2010. In 1981, Asalache purchased what was then a derelict structure occupied by squatters. For the next two decades, he set out to reinvigorate, decorate, and turn his home into a work of art.

Asalache’s work was instigated by the need to disguise persistent damp in the basement dining room by fixing floorboards to the wall. This quickly swelled to include embellishments, intricate designs, beautiful patterns, and mesmerising motifs. Taking inspiration from Moorish fretwork, the artwork also draws inspiration from the Great Mosque of Cordoba, the Alhambra palace in Granada, the yali houses of Istanbul, and the intricate panels of Zanzibar and Damascus.

In 2015, 575 Wandsworth Road hosted a Composer in Residence with the London Symphony Orchestra. Leading composer Cevanne Horrocks-Hopayian used the works of Asalache to develop music that was premiered last year. The composition brought together a recording of Asalache’s piano with extracts from his poems and the renowned violinist Tom Norris. In addition, the residency programme conducted workshops to engage local communities with the house, bringing a new perspective and understanding of the creative process.

Now the house functions as a museum but with a limit of 2000 visitors per year to preserve the wonderful site. Intimate tours need to be pre-arranged by calling the bookings office: 02076224109 or emailing 575wandsworthroad@nationaltrust.org.uk

To avoid damaging the hand-painted floors, outdoor shoes must be taken off so bring along a pair of slippers.