Children from St Mary’s have been given the chance to look around their brand new school for the first time. 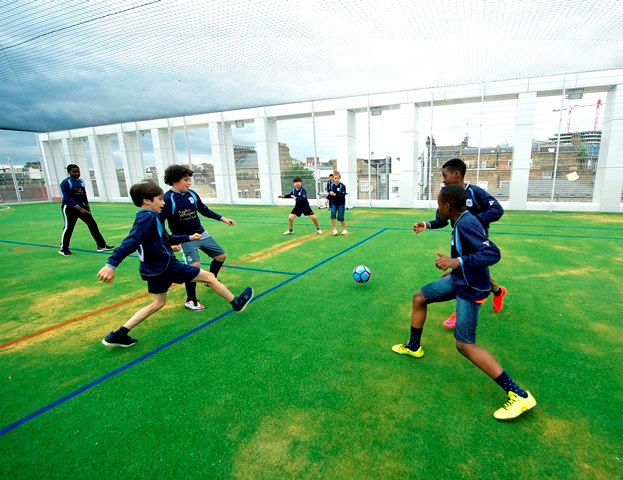 Students and teachers were joined by leader of Wandsworth Council Ravi Govindia and local MP Jane Ellison to celebrate the completion of the school building, which forms the exciting first chapter of Battersea Exchange: a regeneration project from developer Taylor Wimpey Central London.

Forming an integral part of Battersea Exchange, the new school building features a specially-designed 852 sq m rooftop games pitch and a school hall, alongside light and well-designed classrooms that are set around a landscaped central courtyard.

The new facility ultimately means St Mary’s will be able to increase in capacity from one-form to two-form entry.

Battersea Exchange is a mixed-use development designed by award-winning architectural practice Feilden Clegg Bradley Studios. It will deliver 290 homes for the area, along with substantially improved public realm that includes new office and retail amenities, and restored railway arches for community use.

Ingrid Skinner, Managing Director, Taylor Wimpey Central London, said: “I’m hugely proud of what we have delivered here. The thoughtful and innovative use of space to create these fantastic facilities will serve to give the children more space, indoors and out, providing a fantastic foundation for learning.

“Today marks the very first part of this exciting project to be delivered. As we celebrate this milestone, I also look forward to our next – our first residents moving in later this year, and the second phase of the school in the summer of 2017.”

Councillor Ravi Govindia, Leader of Wandsworth Council, added: “The completion of the first phase of St Mary’s new home is a fantastic sign of the delivery and progress in this fast-changing part of Wandsworth. Taylor Wimpey Central London is well on its way to creating a well-designed and better connected part of Battersea, that benefits local people and future generations.”

Battersea Exchange is located in the Nine Elms on the South Bank regeneration area which is rapidly shaping up to become one of London’s most innovative and vibrant quarters.

Find out more at http://www.nineelmslondon.com/