The Prime Ministers of the UK and Malaysia met with leader of Wandsworth Council and co-chair of the Nine Elms Vauxhall Partnership Ravi Govindia at Battersea Power Station today (Thursday) to celebrate the official ground breaking of this vast regeneration project. 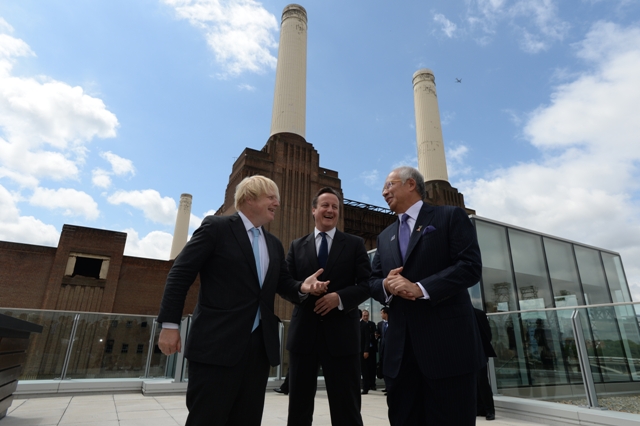 The Prime Ministers of the UK and Malaysia met with leader of Wandsworth Council and co-chair of the Nine Elms Vauxhall Partnership Ravi Govindia at Battersea Power Station today (Thursday) to celebrate the official ground breaking of this vast regeneration project.

S P Setia, Sime Darby and Employees’ Provident Fund (EPF) make up the Malaysian consortium which bought the iconic site last year and are now pressing ahead with its revival.

The scheme is one of more than 20 development sites in the Nine Elms on the South Bank regeneration area.

Work has now officially begun on constructing the power station masterplan, which will see this former industrial site become home to a vibrant new neighbourhood and will bring the Tube to Battersea.

The redevelopment of the 39-acre Battersea Power Station site will lead to the creation of 3,500 new homes, shops, cafés, restaurants and offices, set amidst a new 6 acre riverside park and with the fully restored Grade II* listed Power Station at its heart and open to the public.

As well as a new Tube station, the development will create a new river bus pier for Battersea, making it one of the most accessible destinations in London.

“This project is lifting the fortunes of an entire district and will bring the Tube to Battersea for the very first time. New jobs and opportunities will flow from this development for years to come and we are working with everyone involved to ensure local people reap the benefits.

“We are now watching this part of Battersea transform from London’s logistics centre to a brand new residential and businesses distinct with a revived power station at its heart. The new Nine Elms will be a fantastic new venue on London’s tourist map and a new engine for growth. We have already attracted more than £15bn of new investment to this part of the South Bank and there is no sign of it slowing down. Battersea has an incredibly exciting future.”

Construction works on Circus West, which is the first phase of the power station masterplan, are scheduled for completion in 2016.

The renovation of the Grade II* listed Power Station itself will get underway later this year. This will involve the iconic chimneys being painstakingly rebuilt to the precise design and specification of the originals, but to modern structural standards, and they will remain the centrepiece of the site in the new development.

“This is the day on which one of London’s most keenly anticipated redevelopments has finally got underway. Eighty years since Battersea Power Station first produced electricity, and thirty years since it was decommissioned, construction works have started and the vision is becoming a reality.  Redeveloping a site which is home to such an iconic building is a massive responsibility.

“An outstanding team has been assembled to undertake that work.  On behalf of the shareholders and owners, we look forward to working with all our partners and stakeholders as we work towards creating a vibrant new neighbourhood with the world-famous profile of the Power Station at its heart. ”

Wandsworth and Lambeth residents can find out about training and job opportunities in Nine Elms on the South Bank by contacting jobs@nineelmsonthesouthbank.com or come to the open days on July 11th and 12th.