Wheels of change for Nine Elms on the South Bank

The expansion of the Barclays Cycle Hire scheme to southwest London means that Nine Elms on the South Bank now enjoys complete coverage. 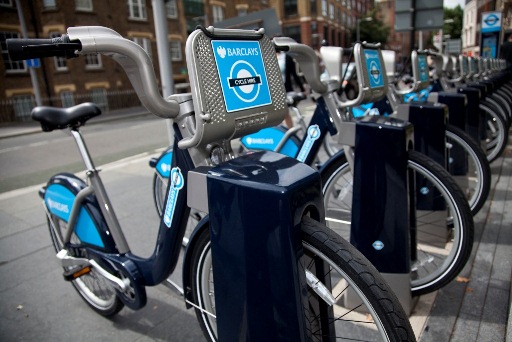 Today (Friday), the Barclays Cycle Scheme has been extended to Nine Elms on the South Bank. People will now be able to use the scheme throughout the £15 billion transformational area between Lambeth Bridge and Chelsea Bridge, which includes Vauxhall town centre, the new US Embassy, New Covent Garden Market and Battersea Power Station. Nine Elms is one of the largest regeneration projects in Europe and the most significant development area in London.

The expansion of the Barclays Cycle Hire scheme to other parts of southwest London means that cycling around Nine Elms on the South Bank has become a more convenient transport option. Barclays Cycle Hire docking stations have been operational around Vauxhall since 2010, with six within Nine Elms on the South Bank.  However, with new stations added at the western end within the Borough of Wandsworth, the Cycle Scheme has now more than doubled its reach and the entire area now enjoys complete coverage.

Several new stations have been installed in Nine Elms since October 2013, including points opposite Battersea Power Station, Battersea Dogs & Cats Home and nearby Battersea Park.

“It’s fantastic that the popular blue bikes are finally coming to Nine Elms and the north of Wandsworth.  Local people now have another great option for getting about and getting up close to iconic attractions such as Battersea Power Station.

“The area is opening up, in the years to come we’ll have a new linear park running from the Power Station up to Vauxhall and an increasingly accessible river path.”

“We’re delighted that the network of Boris Bikes around Nine Elms and Vauxhall has been given this boost.  Vauxhall was well represented previously but there are now new docking points near The Oval, Vauxhall Park and further southwest.  This will benefit Lambeth residents in their daily lives, and will make short journeys far easier.  We hope the extended scheme will encourage locals and visitors alike to explore more of our unique Lambeth attractions, for example the Van Gogh Walk, and journey further afield.”

It is now easier for visitors to Nine Elms on the South Bank to explore the area on two wheels; Battersea Park, at one end of the opportunity area, to the Garden Museum, at the other end by Lambeth Bridge, takes under ten minutes by bike.  The area’s centrality is also underlined by the expanded Cycle Scheme: 15 minutes from Battersea Park to the Houses of Parliament; and ten minutes from Vauxhall to the Southbank Centre.

Leon Daniels, Managing Director of Surface Transport at Transport for London (TfL), said: “Bringing Barclays Cycle Hire to southwest London will open whole new areas of the capital up to existing and first-time scheme users. Expanding the scheme will encourage even more people to take to two wheels in London, whether those journeys are for work or pleasure, and we hope it will also help to deliver wider economic benefits to these areas.”

With increased commitment to cycling as a viable mode of public transport comes increased commitment to safer road usage.  Cycle safety remains paramount, and the key stakeholders in Nine Elms on the South Bank – major landowners, the two councils, TfL and the GLA – are working closely to formalise a comprehensive package of mitigation measures, to reduce impacts and risks.

Five things to see by Barclays Bike around Nine Elms on the South Bank (with handy nearby docking stations):

Right on the northern tip of the area, this gem of a museum celebrates the art of gardens through the ages, hosting exhibitions, talks and workshops.  The Garden Café also serves some cracking cakes, alongside its daily seasonal menu inspired – naturally – by the garden.

Boris Bikers will have to wait a few more months before Damien Hirst’s Newport Street Gallery and the new Cabinet Gallery open, however there are already plenty of interesting art spaces to drop into around Vauxhall, including Beaconsfield and Gasworks, or find events on at the Tea House Theatre, Royal Vauxhall Tavern – or even Vauxhall Pleasure Gardens, if you time your cycle right!

Cycle along Wandsworth Road, passed New Covent Garden Market and you’ll soon reach 575 Wandsworth Road at the southern most tip of the area.  Acquired by the National Trust in 2010, this was the extraordinary home of Khadambi Asalache, a Kenyan-born poet and author (tours must be booked in advance).

Heading north it would be hard to miss the area’s iconic landmark. Whilst the site is currently off limits as the restoration and construction works have begun (itself a mesmerising process to witness), the temporary park that popped up on the power station’s riverfront earlier this year will likely do so again and of course the power station itself will be open permanently to the public from 2019.

Neighbouring the power station are the Battersea gasholders, themselves a well known local landmark.  Piece by piece the gasholders will be deconstructed and a public exhibition is due in the New Year which would also be well worth a visit.  The nearest new Barclays Bike docking station is in the southeast corner of Battersea Park, itself a worthy destination for any Boris Biker. A visit to the Pump House Gallery within the park is also recommended.

Find out more about the Barclays Cycle Hire scheme, including a detail map of the extended scheme: www.tfl.gov.uk/barclayscyclehire