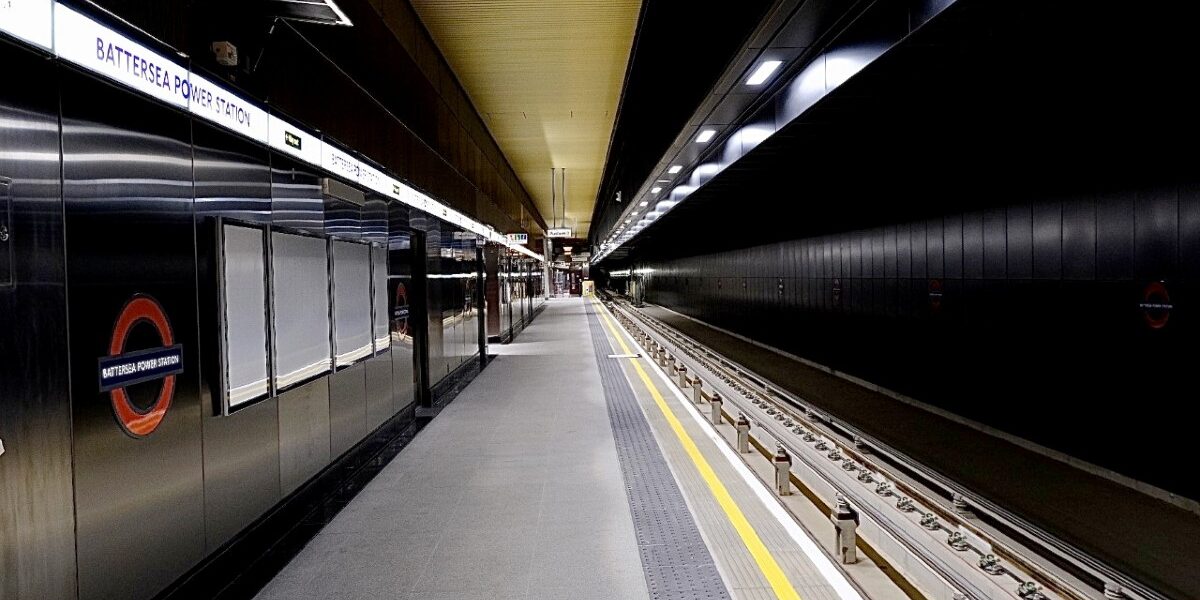 The Northern Line Extension has reached a major milestone with the start of trial train operations on the 3km twin-tunnel railway between Kennington and Battersea Power Station, via Nine Elms Station. The news comes as Transport for London (TfL) confirmed that the two new Zone 1 stations are on track to open in autumn this year.

TfL is now running Northern line trains through the new tunnels every weekend to allow the railway and supporting systems to be run as close to an operational service as possible.

Throughout this trial period, TfL operations and maintenance staff are testing all the systems required to keep the extension running, and existing Northern line train drivers will complete familiarisation training on the route. Later this summer, around 100 members of station staff will also undertake training to become familiar with the two new step-free stations at Nine Elms and Battersea Power Station.

A number of practice exercises will also be completed with TfL staff before opening, including trial emergency evacuations, to test safety procedures.

Lifts, escalators and ticket machines are all in place at both new stations and final testing and commissioning of these assets underway and due to be completed in the coming weeks.

Cllr Ravi Govindia, Leader of Wandsworth Council and co-chair of the Nine Elms Vauxhall Partnership, said: “We’re delighted that the countdown really has begun until new Northern line stations open at Battersea Power Station and Nine Elms this autumn. Delivering the first Tube connection here was a key part of our long-term vision that would unlock the potential of these long-neglected brownfield sites and plug the area into the rest of London. So we’re proud that just a decade later these plans are coming to fruition for our residents and will open the door to future investment in the area.”

Heidi Alexander, Deputy Mayor for Transport said: “The beginning of trial operations on the Northern Line Extension marks a major milestone in the project and it’s really exciting to see final training and testing taking place. When the extension opens this autumn, it will make a real difference to transport links south of the river, supporting thousands of new jobs and homes and boosting London’s recovery.”

Simon Murphy, Chief Executive Officer of Battersea Power Station Development Company, said: “We are delighted to be working closely with TfL on the delivery of the first major extension to the London Underground network in over 20 years which is fundamental to the development and the jobs, homes and community that are being created. We are looking forward to the opening of the line and the Zone One Underground station at Battersea Power Station in the autumn.”

Stuart Harvey, TfL’s Director of Major Projects, said: “The start of trial operations on the Northern Line Extension means we are now counting down to opening the first major Tube extension this century. It’s been a collaborative effort to get to this milestone, and we’ve worked closely with suppliers and stakeholders to make progress on the project, despite the challenge of the pandemic. We have been running isolated test trains through the extension since late 2020 but the successful integration of its software and signalling with the rest of the Northern line means the trials to test safety and reliability can start. It’s a busy time as we will also be training the drivers and station staff so they are ready to welcome our first customers.”

The project is the first major Tube extension this century and will transform transport links in south London. Battersea and surrounding areas will be brought within 15 minutes of the West End and the City, helping reduce carbon and improve air quality by providing more sustainable transport options.

The Northern Line Extension is a key driver for regeneration, supporting around 25,000 new jobs and more than 20,000 new homes. The project itself has also boosted the UK economy, providing almost 1,000 jobs including 79 apprenticeships.