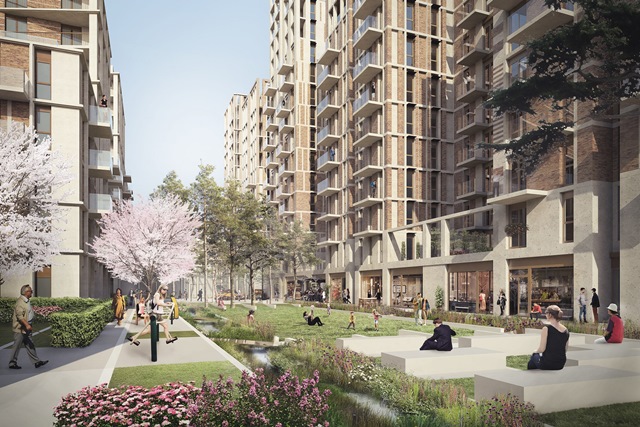 Apple has announced it is to set up its new UK headquarters in the rejuvenated Battersea Power Station with around 1,400 workers under one roof.

The company is leaving its existing HQ in Regent Street in London’s West End and is setting up a new hi-tech head office at Battersea Power Station in the heart of Nine Elms, London’s newest business quarter.

Around 1,400 people employed by the tech giant will occupy a new suite of offices in the power station development in what is being hailed as a major boost to economic fortunes south of the river.

The company is leasing 500,000 sq ft in total, making it one of the biggest single-office deals signed in London outside the City and Docklands in the past 20 years. This will give it enough space to expand its workforce there to 3,000 employees, giving it room to hire more staff as its London operation grows.

Some commentators are predicting that Apple’s arrival will shift the centre of gravity of London’s burgeoning tech scene to the Nine Elms district.

Wandsworth Council leader Cllr Ravi Govindia said: “This is truly exceptional news. The arrival of such a globally important company demonstrates the potential of Nine Elms as one of the most high-profile new business districts, not just here in London but in Europe and beyond.

“There are no bigger players on the global tech scene than Apple. Their arrival in Battersea will no doubt act as a magnet to other hi-tech firms who want to develop new innovative products for a global market.

“There will be a ripple effect drawing in skills, talent and investment to the whole Nine Elms district, creating exciting new employment opportunities for our young people. Our predictions have always been that 25,000 new permanent jobs will be created in Nine Elms. With Apple’s arrival that figure could climb even higher.

“Key to this success has been the work done by us here at Wandsworth Council, alongside Lambeth Council and TfL in making the business case for a new Northern Line extension to this part of Battersea. Bringing the tube to this part of south London for the first time has unlocked this area’s potential. Apple’s arrival demonstrates just how important this work has been.”

The redevelopment of the 42-acre power station site will deliver around 3,500 new homes, including 581 affordable homes, that are to be offered to Wandsworth residents at well below market rates. Additionally its owners are also providing a £211million contribution towards the cost of the Northern line extension, which is scheduled to start operating in 2020.

It will also create 1.2 million sq ft of office space as well as a new high street, shops, restaurants, hotels, leisure facilities, a newly created 18-acre riverside park and a Thames passenger pier, plus a new performing arts venue with capacity for 2,000 people.

In the Wandsworth section of Nine Elms, 16 mixed-use developments have been given planning permission, including a new American Embassy, which is currently under construction. This includes more than than 2,400 affordable homes plus a further £60million which the council will invest in creating other affordable housing schemes.

In a media statement Apple said it was looking forward to the 2021 opening of “our new London campus” as staff relocate to “this magnificent new development at one of the city’s best-known landmarks”.

It added: “This is a great opportunity to have our entire team working and collaborating in one location while supporting the renovation of a neighbourhood rich with history.”

“It is a testament to not only the fantastic building but the wider regeneration of the 42-acre site, which offers a carefully curated mix of homes, businesses and leisure amid extraordinary open spaces and new transport links.

“It has always been our clear objective to create one of London’s most thriving new communities and this commitment from Apple will undoubtedly help us achieve this goal.”