Scores of residents met members of the Nine Elms Vauxhall Partnership on Saturday to hear about the benefits of the area’s regeneration. 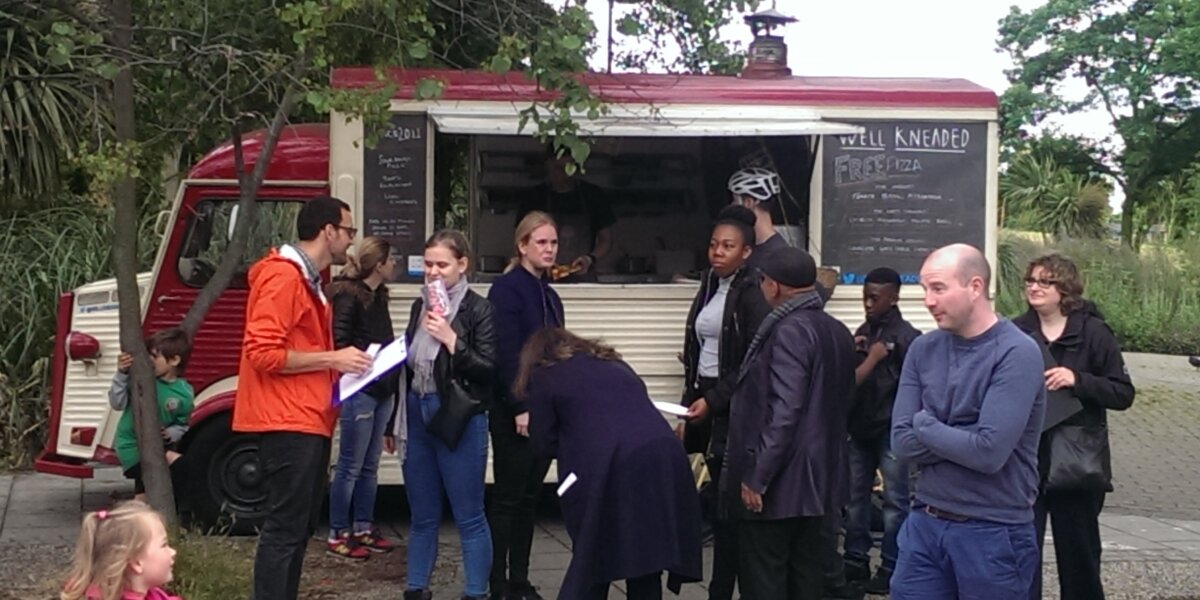 Hundreds of people turned out to meet the team behind the regeneration of Nine Elms on the South Bank during a community event on Saturday.

People were offered the chance to learn more about the opportunities and benefits the regeneration of the area is bringing to their local community and to meet the team over a slice of pizza.

The team set out its stall along with a pizza wagon next to the Wandsworth Road entrance to Larkhall Park on Saturday 18 June.

The informal event was designed to keep people up to date with the progress of the multibillion pound project, which is transforming the area from an underused light industrial zone into London’s newest and most vibrant quarters.

Once complete, Nine Elms on the South Bank will have new schools, two new Tube Stations connecting it for the first time to the Northern line, a new park, and around 25,000 new jobs will have been created.

The event was staged ahead of the Nine Elms Vauxhall Partnership’s annual open day event, which is set to take place at the newly refurbished Vauxhall City Farm in Tyers Street from 3pm until 8pm on Wednesday 13 July and from 8am until 6pm on Thursday 14 July.

Wandsworth Council Leader and Co-Chair of the partnership Ravi Govindia said: “It is very important that existing residents of Nine Elms and Vauxhall are kept informed of the exciting new opportunities the regeneration is bringing to the area.

“Not only will 25,000 new jobs be created but we are working with schools and local colleges to make sure local people are trained up to be able to get many of those jobs.”

Lambeth Council Leader and Co-Chair of the partnership Lib Peck said: “These outreach events are important because we want people already living in the area to be able to get the full benefit of the redevelopment and to be involved in helping to shape their neighbourhood. We gather feedback and then take on board people’s concerns.”

-END-
About Nine Elms on the South Bank:

As well as the rejuvenated Battersea Power Station, the area also includes the new US and Dutch embassies  and plans for a new home for new facilities for the New Covent Market which will include the UK’s biggest fresh produce market and add to it a new centre for London’s foodies alongside it.

The district is being shaped by world leading architects, developers and planners to create a truly mixed-use district with real city centre vitality.
A district-wide cultural strategy is hard-wiring cultural uses and spaces through each new development to ensure the area reaches its full potential as a new centre for arts and creativity on the South Bank.