Riverside Gardens, a new ‘pocket park’ in Nine Elms on the South Bank was officially opened on Monday 15th July; marking a significant step in the regeneration of the area. The park is the result of ground-breaking cooperation between Lambeth and Wandsworth Councils and the developers St George. 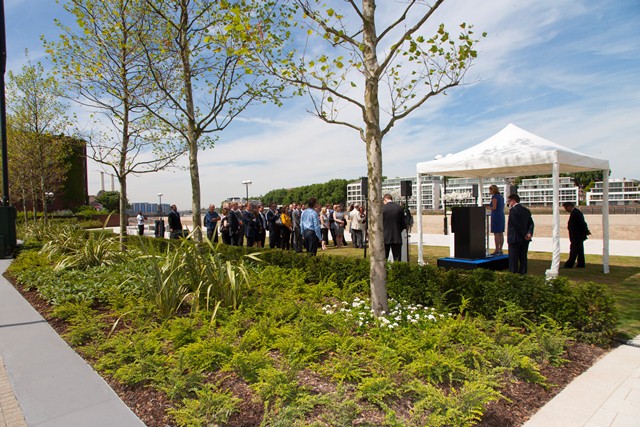 Riverside Gardens, a new ‘pocket park’ in Nine Elms on the South Bank was officially opened on Monday 15th July; marking a significant step in the regeneration of the area. The park is the result of ground-breaking cooperation between Lambeth and Wandsworth Councils and the developers St George.

Riverside Gardens is situated in Wandsworth but has been delivered through the Section 106 planning provision negotiated by Lambeth and St George. This collaborative approach to S106 negotiations has delivered a new piece of public realm for London as part of the Nine Elms on the South Bank development area.

An event to mark the opening of the Riverside Gardens was hosted by St George and Nine Elms on the South Bank. The leaders of Wandsworth and Lambeth Councils, Councillor Govindia and Councillor Peck respectively, alongside Michael Bryn-Jones, Managing Director at St George, unveiled a plaque to officially open the park.

The new park, which is 2,000sqm in size, replaces an unused and difficult to access area of low quality landscaping. The park now provides an open space to be enjoyed by residents and visitors that enhances the spectacular views of the River Thames and to the iconic Battersea Power Station. The new area positively promotes the attraction of wildlife through the diverse planting of shrubs and trees which provide a lush landscaped environment. It also allows another section of the riverbank to become accessible, with more to come over the coming years.

There are a number of other areas of public realm and parkland being developed in the Nine Elms area, including the new ‘pop up’ park at Battersea Power Station and the reinvigorated Vauxhall Pleasure Gardens which is hosting a series of outdoor cinema evenings throughout the summer. Soon there will be a linear park running from east to west linking the new development sites.

Nine Elms on the South Bank is the £15 billion opportunity area between Lambeth Bridge and Chelsea Bridge which includes Vauxhall town centre, the new US Embassy, New Covent Garden Market and Battersea Power Station. It is one of the largest regeneration projects in Europe and the most significant development area in London.

Co-chair of the Nine Elms Vauxhall Partnership and Leader of Lambeth Council, Councillor Lib Peck underlined the commitment to making the Nine Elms Vauxhall development “something that everyone can benefit from; open spaces are an important part of our ambitions for the area. Riverside Gardens is the first of many green spaces which will transform this stretch of the South Bank into a greener and more vibrant part of central London.”

Fellow Co-Chair, Councillor Ravi Govindia, Leader of Wandsworth Council commented: “The park is an example of the commitment from both Wandsworth and Lambeth Council to creating high quality green spaces for the benefit and enjoyment of new and existing residents in the area .”

Michael Bryn-Jones, Managing Director of St George South London, comments: “We are very proud to have delivered these improvements to Riverside Gardens; making them more accessible and inviting. The re-opening of Riverside Gardens will provide a pleasant and secure environment for residents and visitors to relax and enjoy views of the river. Today’s opening signals the first of a series of new public parks and squares planned for the area, representing an important milestone for the regeneration of this exciting London quarter”.