The Chair of a Lambeth Residents’ Association has commended Barratt London for “bringing together the local community” outside their Nine Elms Point development on Wandsworth Road. 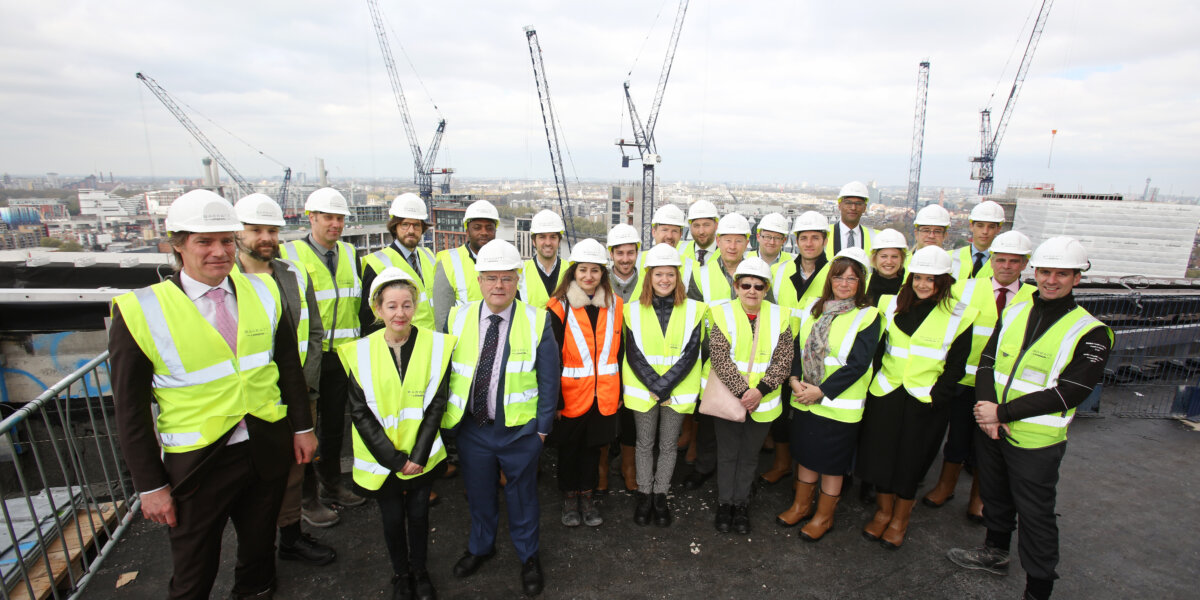 Speaking at an event to celebrate the topping-out of Haydn Tower, part of the housebuilder’s extensive regeneration scheme at Nine Elms, Millie Esposito, Chair of the Heman’s Estate Residents’ Association, said: “The area is now a lot safer, tidier and more up and coming, with great transport connections – it’s a very exciting place to live.

“Thanks to the investments made in our estate, we’ve really been able to improve the area. For instance, we recently formed a gardening club, which just wouldn’t have happened before. People are taking much more pride in their neighbourhood.”

The 28-storey building, which is due to be completed in October, is a focal point of the wider Nine Elms scheme, positioned directly between the future Nine Elms Underground station and Nine Elms Park, an 11-acre public green space running from Vauxhall to Battersea.

Cllr Paul McGlone, Deputy Leader of Investment and Partnerships at Lambeth Council, was presented with a silver trowel and laid the “final plinth” to signify completion of the external building, which stands at approximately 95 meters above ground level.

Beginning work in February 2014, Barratt London has delivered 222 of their 647 new homes at Nine Elms Point, 52 of which are shared ownership, and built a flagship Sainsbury’s superstore on Wandsworth Road.

“It was a pleasure to attend the topping out of Haydn Tower at Nine Elms Point, part of the exciting Vauxhall Nine Elms development. This will create a new district at the heart of London.

“It was particularly great to meet local residents who have been involved in the project since the beginning to see the benefits that they and their neighbours will receive as a result, which includes the local apprenticeships and jobs that we’ve worked with Barratt’s to ensure are provided as part of the construction project and afterwards, alongside improved transport links, affordable housing, green space and new retail sites.”

“We are very proud to be such a prominent feature of the Nine Elms regeneration scheme, which will soon be an important area for culture, business, design and community in our city – and one that importantly provides us with an additional 20,000 homes.”

For more information regarding the scheme, please visit barrattlondon.com/nineelmspoint