A new report examining the capital’s commercial property market has pinpointed Nine Elms on the South Bank as an emerging ‘hotspot’ for inward investors. 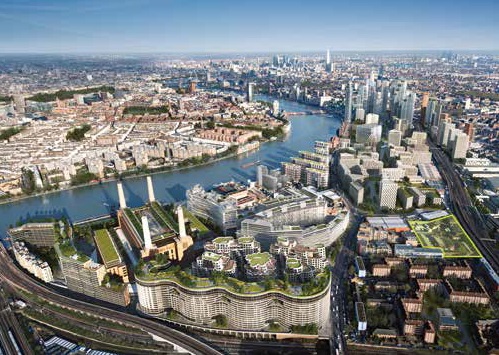 A new report examining the capital’s commercial property market has pinpointed Nine Elms on the South Bank as an emerging ‘hotspot’ for inward investors.

The London Report, by property experts Knight Frank, identifies the riverside district as a prime commercial and retail zone in the making with the potential to rival established business clusters found in the City and West End.

The report highlights the high volume of new commercial floor space (6.5million sq. ft) now being built across Nine Elms which is “drawing tenants thanks to new infrastructure links and an ambitious mixed use offering.” Knight Frank say that London’s firms “are more footloose on location than ever before” and that Nine Elms is one the areas benefiting from the trend.

Two new Northern Line tube stations will open in Nine Elms by 2020 as part of a £1bn+ infrastructure package which is funded almost entirely by the private sector. Upgrades include a new area-wide data network, major improvements to Vauxhall Underground Station and a  new stretch of Thames River Path linking Battersea Power Station to the Albert Embankment for the first time in decades.

The 561 acre regeneration area is part of London’s Central Activities Zone and includes parts of Wandsworth and Lambeth.

The area’s commercial growth is set to deliver 25,000 permanent jobs and a further 22,000 linked to the construction programme.

Cllr Ravi Govindia, Co-chair of the Nine Elms Vauxhall Partnership and Leader of Wandsworth Council, said: “Nine Elms is on course to become a major commercial hub over the next ten years. Our central London riverside location has obvious appeal and the new Tube stations and wider transport package we’re delivering give us the connectivity a modern business district needs.

“Investors are also beginning to understand the scale and depth of the placemaking and cultural initiatives that run through the area. The world’s leading architects and master planners have collaborated in the Nine Elms programme and the result will be a truly mixed-use district with great spaces, great buildings and real vitality throughout the day and night.”

Cllr Lib Peck, Co-chair of the Nine Elms Vauxhall Partnership and Leader of Lambeth Council, said: “A wide range of office, retail and other commercial space and good transport links make the area very attractive to business and that’s good for us locally and London wide.  A thriving local economy helps create sustainability which is essential for an area to grow and strengthen its identity.”

About Nine Elms on the South Bank:
Nine Elms on the South Bank is the £15 billion opportunity area between Lambeth Bridge and Chelsea Bridge, and is one of the largest regeneration projects in Europe. The area, which includes part of Wandsworth and Lambeth, is being transformed from one of the capital’s last remaining industrial districts into a world-class destination right in the heart of London.
Already home to Vauxhall and Battersea Power Station, the area will also be home to the new Embassy of the Kingdom of the Netherlands and the new U.S. Embassy.

Throughout the area under-utilised industrial land is being transformed into new public squares, parks, schools, Tube stations, homes, and businesses. It is fast becoming a strikingly modern addition to London and a new centre for culture on London’s South Bank.