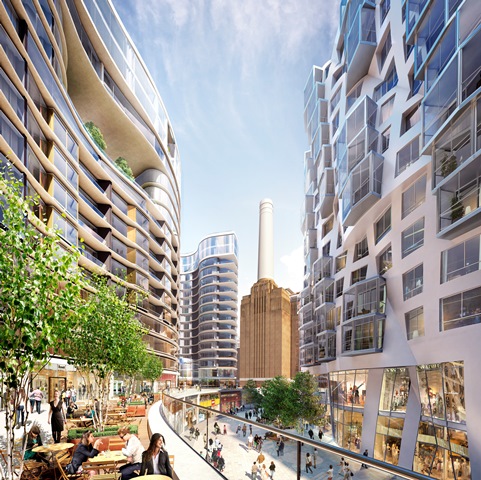 ‘Phase three’ of the scheme’s masterplan will create a new pedestrian high street running from Battersea Park Road to the power station building. This would be the main gateway to site from the south and will include entrances to the new Northern Line tube station below.

The scheme also includes a new pedestrian subway underneath Battersea Park Road, linking Stewards Road with the new power station development and providing another route into the tube station.

A total of 1,305 homes would be built in this phase, including 103 which will be available for Wandsworth residents on low and middle incomes to rent at a reduced rate.

Battersea Power Station is one of around 30 development sites in Nine Elms on the South Bank. Across the entire regeneration area around 18,000 homes are being built alongside enough business space to support 25,000 jobs.

To the  west of the new high street will be a distinctive wave shaped building designed by Foster and Partners. This 17 storey building will include six large gaps to allow light to pass through and providing views of the power station from the train line on the other side.

The building will include one of London’s largest roof gardens extending the full length of the building.

There will be 617 homes in the Foster’s scheme with the two  lower floors facing onto the new high street providing two levels of commercial space for shops, café, bars and other uses. The building will also include a 167 room hotel and a health clinic.

To the  east  of the new high street the scheme has been designed by American architect  Frank Gehry and includes five main buildings ranging in height from 16 to 17 storeys. These include the striking ‘Flower’ building which sits at the heart of the cluster.

This side of phase three will provide 688 homes, a gym and more shops, cafes, bars and restaurants on the lower levels.

There will be new public park called Prospect  Park which will include a children’s play ground and a community hub building in the form of a glass cube.

The target date for completion of phase three is 2020 which is when TfL expects the Northern Line Extension to be up and running. This will provide journey times from Battersea to the West End and the City of around 15 minutes.

Phase one and two of the power station masterplan already have detailed planning permission from Wandsworth Council and are well underway. These earlier phases include new buildings in the north west corner of the site, a new riverside park and the complete restoration of the power station building.

“This is quite unlike any of the shopping and leisure destinations we’ve seen built around London in recent times. Battersea Power Station will be a unique place and we look forward to this seeing these exciting plans become a reality.

“Both the Ghery and Fosters designs are outstanding. The architecture itself will be great attraction and the new public parks and shopping areas are of the very highest quality.

“New homes, jobs and economic growth will flow from this development and the site’s owners are delivering on their promise of a world class destination. This is great news for Battersea and for London.”

“People have wondered what the new Nine Elms will be like and how it will measure up to the rest of the South Bank.  These designs, alongside the others we have already approved, are turning that curiosity to excitement.

“Our outline plans are now being coloured in by some of the world’s most brilliant designers and the area’s character is taking shape. Almost everywhere you look in Nine Elms there are exceptional things happening and valuable new opportunities being created for local people.”