Nine Elms on the South Bank welcomes The Big Draw 2014

Big changes are taking place throughout Nine Elms on the South Bank, and what better way to be a part of capturing that change than by getting involved in the area’s 2014 Big Draw programme. 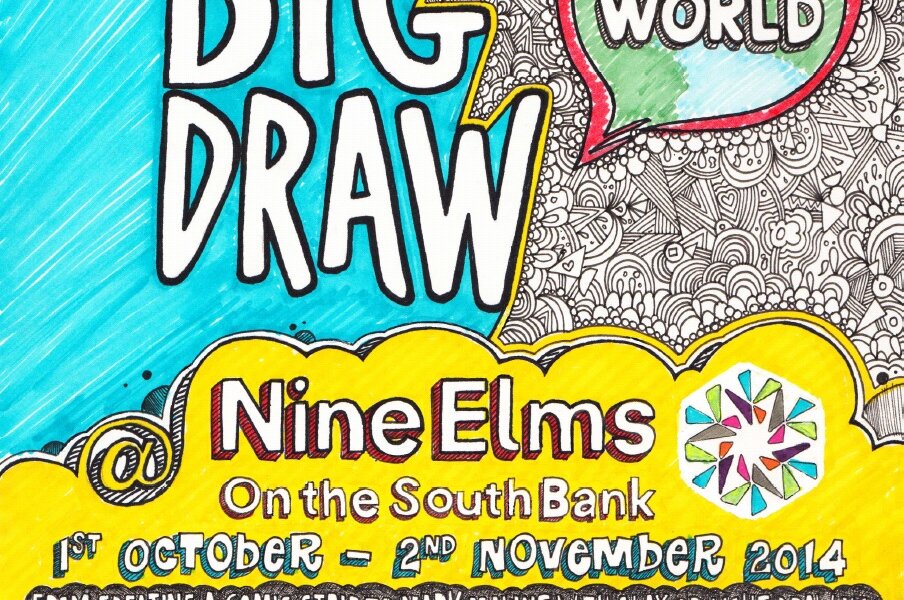 [London: 30 September 2014] Big changes are taking place throughout Nine Elms on the South Bank, and what better way to be a part of capturing that change than by getting involved in the area’s 2014 Big Draw programme. From 1 October to 2 November, 280,000 people are expected to join in over 1,000+ drawing activities nationwide as part of The Big Draw 2014 and Nine Elms have a huge programme of events this year. Most of the events are free and for all ages – for those who love to draw, as well as for those who think they can’t!

As part of The Big Draw last year, Nine Elms invited the public to sketch the early stages of the regeneration from the 20th floor of Market Towers – a site now under demolition, with construction on Wanda One (UK)’s One Nine Elms set to begin early next year.

One year on the regeneration is picking up pace, with 14 schemes currently on site for the £15 billion opportunity area between Lambeth Bridge and Chelsea Bridge. This year’s Big Draw events will take place a little closer to the ground, with a wide-ranging programme offering creative drawing experiences across the area, helping Londoners to get better acquainted with central London’s newest district.

• A giant dollhouse workshop at The Doodle Bar in Battersea, where the audience can build (or doodle) their own dream Nine Elms home – BYO shoebox! – 18 October 10am-12pm & 2-4pm (For all ages)

• A series of comic art workshops with acclaimed illustrator Daniel Locke at Space Station Sixty-Five: using a short piece of newspaper text as their starting point, participants will learn how to create comic art that considers composition, expressive colour use and pacing – 18 October, 2pm (Ages 16+)

• A unique opportunity to make your mark on the walls, up the stairs and even on the landing of artist Pam Williams’ studio through the creation of 6×4 ft. puzzles – 4 & 5 October, 10am-5pm (For all ages)

• Scribble, sketch, colour, paint and weave along the Thames riverbank on Nine Elms Lane with The Brick Box – expect light graffiti, colourful performances, storytelling and more – 25 & 26 October, 12pm to 10pm (For all ages)

• A Muddy Squelchy Big Draw at the Garden Museum, using clay to draw and create a garden within the museum. The garden will ‘grow’ each day as more visitors contribute in clay – 27–31 October (For all ages)

• Kids can create a menagerie of their own at Vauxhall City Farm with author and illustrator of ‘The Zebra Who Ran Too Fast’ Jenni Desmond, all materials provided – 30 October, 1-4pm (Ages 4-7)

For information on Big Draw in and around Nine Elms on the South Bank please visit:  www.nineelmslondon.com/bigdraw

Helen Fisher, Programme Director, Nine Elms on the South Bank said: “I am thrilled to be welcoming The Big Draw back to Nine Elms; it is great to see so many of the area’s institutions and organisations getting involved. I look forward to seeing families and communities from across London come together to explore Nine Elms on the South Bank and get better acquainted with the changes that are taking place.”

Sue Grayson Ford, the Campaign for Drawing Director, said: “I am delighted to see Nine Elms on the South Bank playing such a big part in The Big Draw 2014. Drawing helps us to understand the world in which we live, and what better way to get to know the changes underway in this rapidly transforming part of London than through this fantastic array of creative activities for all ages!”

Nine Elms on the South Bank
Nine Elms on the South Bank is the £15 billion opportunity area between Lambeth Bridge and Chelsea Bridge, and is one of the largest regeneration projects in Europe. The area will be transformed from one of the capital’s last remaining industrial districts into a world-class destination right in the heart of London.  Already home to Vauxhall and Battersea Power Station, the area will also be home to the new Embassy of the Kingdom of the Netherlands and the new U.S. Embassy. Underutilised industrial land is making way for new public squares, parks, schools, Tube stations, homes, and businesses, which will drive growth and create jobs and homes. It will become a strikingly modern addition to the cityscape and a new centre for culture on London’s South Bank.

The Big Draw
The 2014 Big Draw will run from 1 October to 2 November across the UK and in twenty other countries, with 280,000 people expected to join in over 1000+ events. The Big Draw offers thousands of enjoyable, and mainly free, drawing activities which connect people of all ages with museums, outdoor spaces, artists, designers, illustrators – and each other. These events are for those who love to draw, as well as for those who think they can’t!