Nine Elms comes together with Tate Exchange for a final workshop

On 10th March, the Nine Elms Vauxhall Partnership, as an associate of Tate Exchange, will be running a workshop finale for Material Action – a six months arts programme that has been taking place around Vauxhall and Nine Elms. 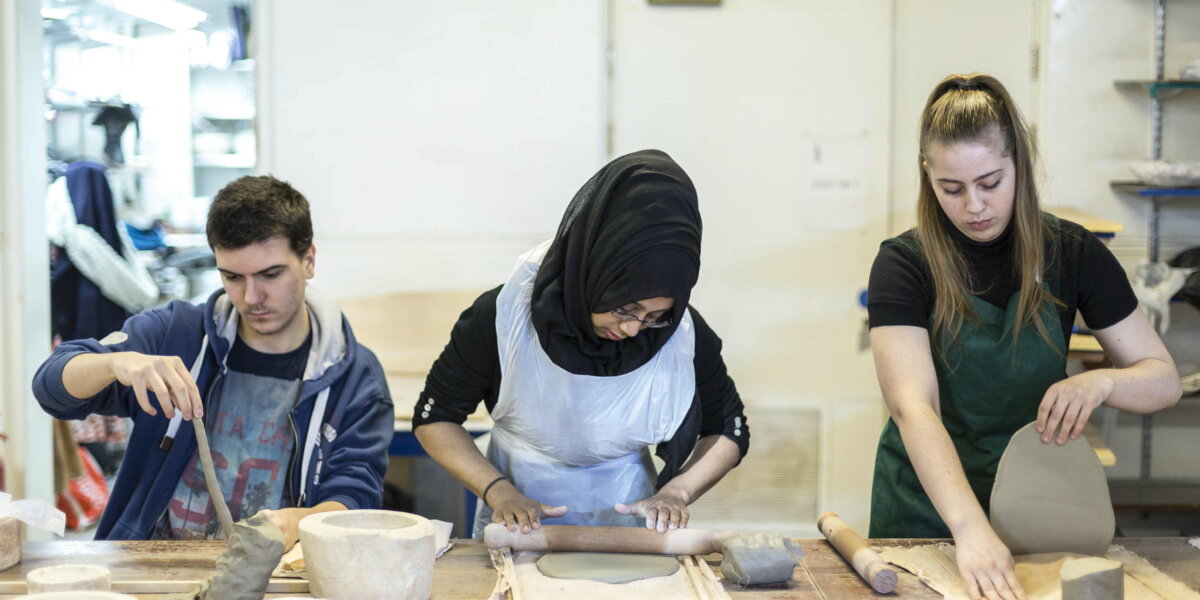 On 10th March, the Nine Elms Vauxhall Partnership, as an associate of Tate Exchange, will be running a workshop finale for Material Action – a six months arts programme that has been taking place around Vauxhall and Nine Elms.

Last October, the Nine Elms Vauxhall Partnership launched a new arts engagement project as part of the Tate Exchange programme, bringing clay and storytelling workshops to a network of galleries on the south bank of the Thames.

Tate Exchange is an ambitious ‘open experiment’ which allows other organisations and members of the public to participate in Tate’s creative process, running events and projects on site and using art as a way of addressing wider issues in the world around us.

The project – called Material Action – has offered young people from Wandsworth and Lambeth the opportunity to explore clay working and exchange their experiences of the developing area with the support of skilled and established artists.

The Vauxhall and Nine Elms area is currently undergoing significant change and the aim of the project was to give creative decision-making and control back to local participants. Clay was the common element used throughout the project.  As well as being the base material (brick) for many of the buildings around Vauxhall and Nine Elms, old and new, the transitional nature of clay worked as the perfect metaphor for the evolving heritage of the area.  It allowed participants to express personal views of their changing area, experimenting with a variety of clay modelling techniques.

Clay was transformed from three tonnes of rubble into a collaborative cityscape by youth groups at Beaconsfield Gallery Vauxhall, whilst participants created new heirlooms at Gasworks for ‘orphaned’ bric-a-brac using the Japanese technique of kintsugi.  Pump House Gallery encouraged visitors to reconnect with urban nature through clay brick making, and find beauty in our every day surroundings.

The six month programme of workshops, discussions and exchange now culminates in a final workshop in Tate Exchange, which will be an interactive and participatory event, open for all.

Come and see the outcomes of our workshops and participate in live clay workshops on the day.

We hope to see you there!

Ravi Govindia, leader of Wandsworth Council and co-chair of the Nine Elms Vauxhall Partnership, said “After six months of workshops around Nine Elms we’re delighted the groups’ clay masterpieces are now being shared at Tate, no less.  Clay working really seems to have captured our local residents’ imagination – every workshop has been oversubscribed and the feedback has been great.

“It’s important that whilst all the construction goes on we’re able to involve local people as much as possible and give them an outlet for expression.  We look forward to meeting more local residents at Tate Exchange but indeed anyone is welcome to get involved on the day.”

Cllr Lib Peck, leader of Lambeth Council and co-chair of the Nine Elms Vauxhall Partnership, said “The partnership with Tate Exchange and the galleries around Vauxhall and Nine Elms has been a great example of creative partnerships and it’s engaged young people across Lambeth through a fun project, as well as local groups. We’re looking forward to celebrating those efforts at Tate Modern and invite everyone to come and enjoy the last interactive workshop of the programme.”

Tate Exchange allows other organisations and members of the public to participate in Tate’s creative process. Organisations from a wide range of fields well beyond the gallery’s normal reach have become Associates of Tate Exchange. This group will help to programme and run new dedicated spaces. Working in a spirit of generosity, openness and trust, the Associates will collaborate with one another around an annual theme inspired by the art on display. Tate Exchange will in time expand its group of Associates to include more partners from the UK and abroad, while consistently seeking to engage audiences which are new to the museum.
For the full list of Associates and more information please visit tate.org.uk/tateexchange.

The Nine Elms Vauxhall Partnership was created in 2010 to coordinate and drive forward the transformation of this central London district. Co-chaired by the leaders of Wandsworth and Lambeth Council, it includes the area’s main developers and landowners, the Mayor of London, Transport for London and the Greater London Authority.
This unique public-private partnership has a shared vision for the area and is driving forward its ambitious place-making and cultural development programme in close consultation with local communities.

Established in 1994, Gasworks is a non-profit contemporary visual art organisation working at the intersection between UK and international practices and debates. Gasworks provides studios for London-based artists; commissions emerging UK-based and international artists to present their first major exhibitions in the UK; and develops a highly-respected international residencies programme, which offers rare opportunities for international artists to research and develop new work in London. All programmes are accompanied by events and participatory workshops that engage audiences directly with artists and their work.
Gasworks is also the hub of the Triangle Network, an international network of over thirty arts organisations, mostly based in Africa, Asia and South America. Triangle Network regularly develops and facilitates artists’ residencies and workshops as well as peer-to-peer exchanges, both between the UK and the rest of the world or within a specific region. Triangle informs Gasworks’ programme, giving the organisation unparalleled opportunities to nurture and exhibit artists from across the world

Beaconsfield Gallery Vauxhall is a non-profit, artist-led entity, placing equal emphasis on audiences and artists. Founded as an educational charity in 1994 to fill a niche between the institution, the commercial and the ‘alternative’, Beaconsfield’s reputation rests on the staging of an influential programme of commissions (beacons) in a range of art mediums (field). The organisation’s function as a primary research vehicle is particularly notable for pioneering developments in time-based, political and sound art as well as curatorial practice.
Through its identity as an experimental art laboratory and gallery, BGV  has sustained a long-term engagement with challenging the boundaries of artists and audience at home and abroad International partnerships have included the Museum of Contemporary Art Oslo, Tate Britain and Foam Museum, Amsterdam.