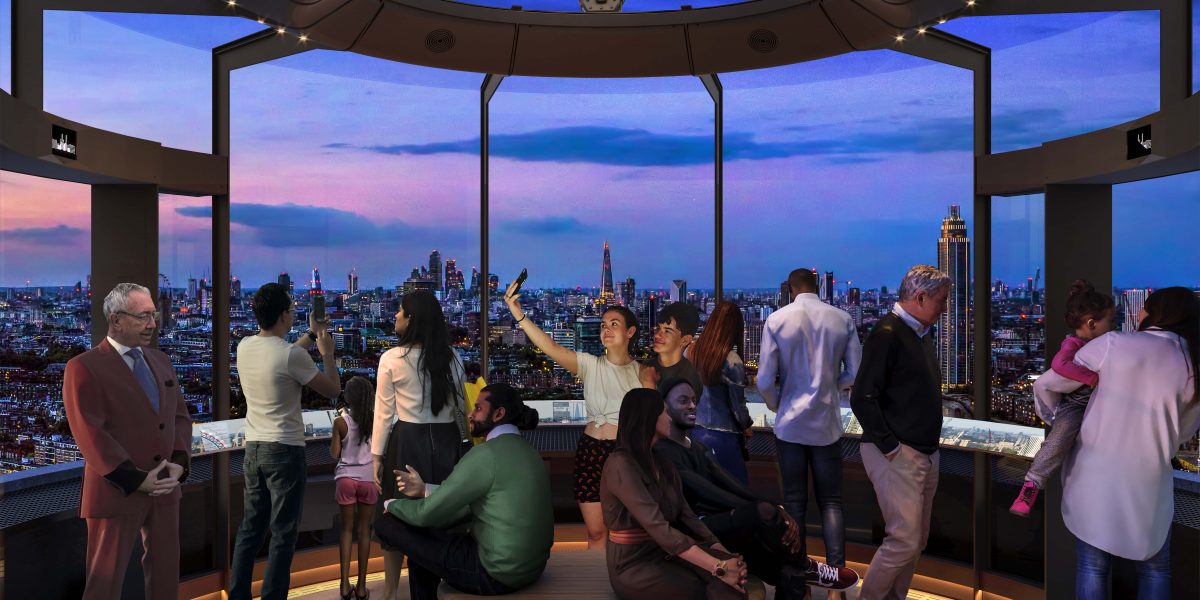 London’s iconic Battersea Power Station has revealed a new interactive and immersive CGI bubble image of its unique Chimney Lift experience. The image is a sneak preview of the breathtaking 360° panoramic views across Nine Elms and beyond that guests will experience once the lift reaches the top of the Grade II* listed building’s North West chimney.

It was also announced that London’s latest attraction will be operated by global events and entertainment leader, IMG, once the Power Station opens to the public next year.

Travelling 109 metres up the interior of the North West chimney to the top, the Chimney Lift at Battersea Power Station will offer unrivalled views of Nine Elms and the capital’s skyline and a one-of-a-kind perspective back down onto the historic landmark. Set to become one of the most unique viewing platforms in London, the bespoke glass Chimney Lift will hold around 30 visitors and be available to the public as well as for private events.

The visitor experience will begin in Turbine Hall A with an immersive exhibition celebrating the Power Station’s history, before venturing into the Chimney Lift.

Once completed, Battersea Power Station will form the centrepiece of a new ‘15-minute’ live, work and play neighbourhood, which will act as a town centre for the immediate and wider local communities, a new business quarter for the capital and an experiential destination for Londoners and international visitors.

Inside the Power Station there will be 253 residential apartments, over 100 retail shops, restaurants and cafes, as well as unique event spaces. Apple will also take 500,000 sq. ft of office space across six floors in the Power Station for its new London campus.

Residents and visitors to Battersea Power Station will also be able to enjoy numerous new green and open public spaces, including the new Bjarke Ingels designed Malaysia Square and the six-acre Power Station Park on the river bank, which connects seamlessly to the new linear Nine Elms Park running from Battersea to Vauxhall.

Circus West Village, the first chapter in the regeneration of Battersea Power Station, is already home to more than 1,500 residents and over 20 bars, restaurants, cafés and fitness and leisure offerings including The Turbine Theatre, Be Military Fit, DNA VR, Black Sheep Coffee and Archlight Cinema.

The Northern Line Extension is set to open here this autumn, with a Zone 1 London Underground station which will draw visitors from across the capital and the globe, boosting the local economy and creating over 17,000 jobs.

Planning your next career move? Read more about job opportunities in Nine Elms and Battersea.