Some of the first homes in Wandsworth to have been purpose-built for market renting will become available to move into later this summer. 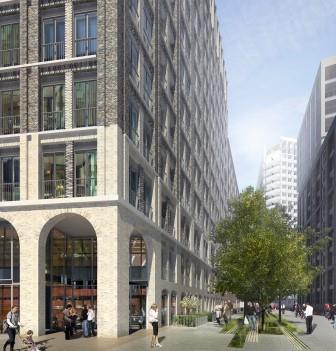 The Residence, at Nine Elms, is built on the site of the former Christie’s auctioneers warehouse, and is made is up of 114 one-, two- and three-bedroom flats.

Each comes with its own balcony or terrace, and tenants will have access to a residents-only roof garden, with views across the River Thames and US Embassy. The Residence is being managed by L&Q housing association.

The wider redevelopment of the 2.7 acre former Christie’s site by developer Bellway is providing a total of 510 new homes, including 76 which will be offered to local residents at rents starting from 38% of market rates.

Located in the heart of Nine Elms on the South Bank, which includes the new US Embassy, Battersea Power Station and New Covent Garden Market, the development also includes thousands of square metres of floorspace for businesses and community use.

A new outdoor public space is being created on the site, including part of the new Nine Elms Park which will run all the way from Vauxhall Cross to Battersea Power Station.

Cllr Ravi Govindia, Leader of Wandsworth Council, said: “Demand for private rented housing has increased considerably in recent years, which is why it’s important to ensure a range of homes for renting are built, as well as for sale.

“The borough’s local economy and public services depend on the broad range of people who live here, which is why we support different initiatives such as building new council housing, as well as homes for shared ownership, low cost rent, and market rent.”

Erdal Kacar, L&Q Operations Manager, said: “We are thrilled to be launching a large number of new homes for private rental within one of the country’s most exciting regeneration areas. Nine Elms is already a well-connected area, being just 15 minutes walk to Westminster, but the launch of the Northern Line extension in the next few years will really make a difference to the residents of this brand new riverside community.”