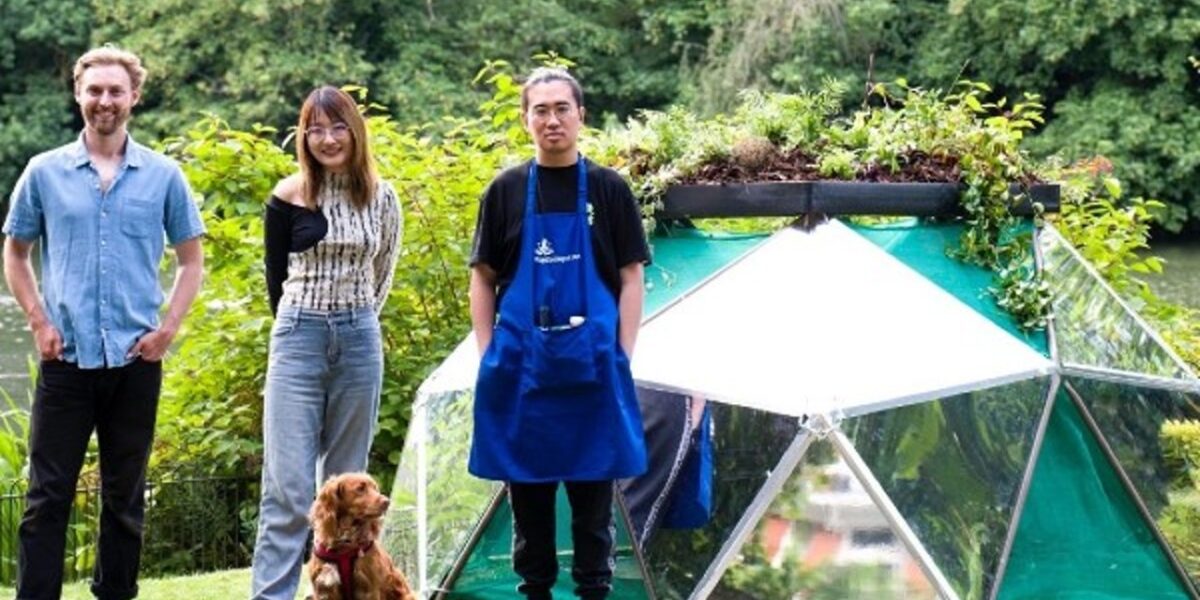 Exactly 100 years on from Barbara Hepworth’s time as a student at the Royal College of Art, a new generation of sculpture students are now following in her footsteps.

Sculpture students from the Royal College of Art (RCA) are set to temporarily occupy the site of Dame Barbara Hepworth’s Single Form (Memorial) sculpture in Battersea Park. A rolling programme of newly commissioned, site-specific sculptural installations will take over the site from June to October 2022, while the Hepworth is on loan to Amsterdam’s Rijksmuseum as part of a major retrospective on the British sculptor’s work.

Wandsworth Council invited RCA students to respond to the historical, conceptual or formal context of the park as a public, open, green space in Wandsworth. Five projects were selected, each featuring an idea for a temporary installation alongside a public programme of talks and events. The RCA ‘takeover’ started this month and the final work is due to be installed in September 2022.

The first of these projects, installed until the start of July, is Locuscope by Gabriel Mansfield, Shirley Renwick, Yuqing Shi & Yue Yin. This sensory dome has been inspired by the circular void that punctuates Barbara Hepworth’s Single Form (Memorial) sculpture. The dome provides multiple viewpoints to witness the activity of the surrounding area, by peering through to the opposite side or upon the tessellated mirror surface. The form of the structure echoes prehistoric human round houses or bird nests – where perhaps a sense of security stems from the ability to look out in all directions. The voids allow the environment to pass through – light and wind, flora and fauna.

Jaspar Joseph-Lester, Head of Programme, MA Sculpture, RCA, said: “We are delighted to have such a prominent public platform for our MA Sculpture students to produce contemporary and site-specific works that respond to the conceptual, formal and historical framework of the Park as a public, open and green space in Wandsworth.”

Barbara Hepworth studied at the Royal College of Art between 1921 and 1924 and is recognised as one of the pioneers of modernism in sculpture.

Sophie Bowness, the Barbara Hepworth Estate and Guest Curator of Barbara Hepworth in the Rijksmuseum Gardens said: “I’m delighted that, while Single Form (Memorial) is on show in Amsterdam, a very imaginative programme has been devised for its site in Battersea Park this summer. Barbara was herself a sculpture student at the RCA in the 1920s, so this project has an extra resonance. She also tried to support younger artists in St Ives whom she admired. I look forward very much to seeing the work of this new generation of sculptors.”

Alongside the series of temporary sculptures, the five groups have organised a programme of public events. Full details of the events can be found at www.rca.ac.uk/news-and-events/events.

This will be followed by The Visible Invisible by Blythe Plenderleith, Carlota Bulgari, Junchao Ren, Ioana Maria Sisea, Sarra Badel & Ziwei Wang, installed from week of 4 July. This project plays with the viewer’s perception of absence and presence using the technique of lenticular printing. The sculpture deals with ideas of memory, time and nostalgia, as images appear from one angle but become invisible from another.

Memorial for a Memoria by Francesca Dobbe, Shiyao Liu, Christopher Simpson, Annie Trevorah, Yunpeng Wang & Jasmin Saya Young, will be installed week of 25 July. This year marks the 60th anniversary of the completion of Hepworth’s Single Form (Memorial) (in Feb 1962) and Group 3’s Memorial For A Memorial installation will pay tribute to Hepworth through a concept based on the empty space left behind from the absent sculpture. Drawing inspiration from the negative space, the group focuses on the hole/circle as a window to nature to maximise the view across the lake and by incorporating a shaped bench, the sculpture invites interaction from the public. The bold red structure is made from recycled wood.

Making Marks by Irena Posner, Aliya Orr, Duoduo Huang, Veronica Smith, Yuanze Che is the fourth project and will be installed the week of 29 August. Starting from Barbara Hepworth’s ideas around utopian, spiritual and metaphysical relationships of humanity to nature, Making Marks will explore animal interactions with the arts through a vertical grass-based sculpture that dogs can engage with on their daily walk through Battersea Park.

The final project is Reflected Perspective by Jacob Talkowski, Yumeng Zang, Zhaobo Yang, Alice Dawson & Rachel Bungey and will be installed the week of 12 September. This piece is a series of three laser cut acrylic mirror sheets held in the open air above a ‘platform’ by individual industrial steel scaffolding tubes. The group hopes by bringing the local natural world of the park into focus, they will help break down the climate crisis from a large structural issue to something local and relevant to a group who may be dealing with strong feelings of climate anxiety.

About RCA sculptures in Battersea Park

The project is a collaboration between the Royal College of Art (RCA), London Borough of Wandsworth, Enable Leisure and Culture, Friends of Battersea Park and The Battersea Society, and the students’ sculptures will be on display in the park from June to September this year, rotating every few weeks. The contributing students are delivering their projects with guidance and support from Jaspar Joseph-Lester (Head of Programme, MA Sculpture) and Joanne Tatham (Tutor).

Between 1948 and 1966 Battersea Park became a world-famous gallery under the open skies, hosting an innovative series of outdoor sculpture exhibitions that propelled modern art’s biggest names into the British public’s consciousness. Read more on wandsworthart.com about the history of open air exhibitions in Battersea Park: When Matisse and Moore came to Battersea Park.

Barbara Hepworth is one of the pioneers of modernism in sculpture – a movement that broke with tradition and introduced innovative forms of expression in the early 20th century. Born in Wakefield, Yorkshire in 1903, she studied sculpture at the Leeds School of Art (1920-1), where she met the sculptor Henry Moore, and then at the Royal College of Art (1921-4).

Single Form (Memorial) is an abstract bronze cast by British sculptor Dame Barbara Hepworth and is one of three iterations of this work. It was used as the model for developing her most prestigious international commission: Single Form (Memorial to Dag Hammarskjöld), which stands outside the United Nations Secretariat building in New York (erected in June 1964). Dag Hammarskjöld was Secretary-General of the United Nations from 1953-61 and a friend of Hepworth’s, who admired her work. He died in a plane crash in Zambia (then Northern Rhodesia) enroute to a peace mission to the Congo on 18 September 1961.

The plaster prototype of Single Form (Memorial) was completed in February 1962 and displayed at Whitechapel Art Gallery from May – June 1962. A bronze cast of the sculpture was exhibited as part of London County Council’s (LCC) Battersea Park Sculpture: Open-air Exhibition, from May – September 1963. Once the first cast had been shipped to the US, a second cast was bought by the LCC for a permanent site in Battersea Park and installed on the south side of the boating lake in June 1964. The work is Grade II* listed.

Find out more about Barbara Hepworth in the Rijksmuseum Gardens