The Minister for London, Jo Johnson was welcomed to Wandsworth by the Council Leader, Cllr Ravi Govindia, as he met apprentices working in Nine Elms.

The Minister for London, Jo Johnson was welcomed to Wandsworth by the Council Leader, Cllr Ravi Govindia, as he met apprentices working in Nine Elms.

The Minister spoke to apprentices at the Battersea Power Station site to mark the 1000th person placed into work through the borough’s successful Work Match scheme.

He also visited the site of the new London Underground extension – where tunnelling works are now complete ready to extend the Northern Line to Battersea – previously backed by government investment through a £1 billion loan to the Greater London Authority. 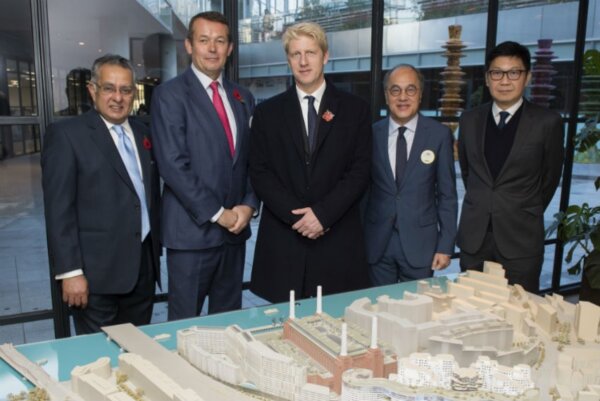 Minister for London Jo Johnson said: “It is exciting to see first-hand the work that is going on as part of the regeneration project at Battersea – this London landmark is being put to excellent use to ensure existing neighbourhoods flourish, while attracting a wealth of new businesses to the area.

“The Northern Line extension is a key part of this – we have to be ambitious for London in the decades to come and this will bring new jobs and opportunities to the area.

“I enjoyed meeting some of the people who have found work through Wandsworth’s scheme, and wish them continued success in the future. This comes alongside the government’s drive to create three million quality apprenticeships – set to change the lives of young people and the prospects of businesses.

Wandsworth Council set up the Work Match scheme in 2013 to help get local residents into work, supporting candidates through the application process and giving them pre-job training for roles as diverse as security, construction, catering and leisure.

As part of the integrated approach to match suitable candidates with employer demands across the borough, the council struck up a partnership with Battersea Power Station Development Company to match local people to job vacancies.

Construction roles have been filled by 150 apprentices as part of the Battersea project – in jobs ranging from crane drivers to carpenters – with more than half coming from the local community.

Leader of Wandsworth Council, Cllr Ravi Govindia, said: “We are incredibly proud of what the team at Work Match has done for our residents – to have put 1,000 Wandsworth people into employment is an incredible achievement.

“As the range of jobs available in the Nine Elms area grows and changes with new shops and hospitality businesses opening up, we have found that businesses really trust Work Match to provide them with excellent candidates.”

“Providing opportunities for local people is ingrained in Malaysian culture and therefore a huge priority for us, hence our involvement with Wandsworth’s Work Match programme and the establishment of the Battersea Academy of Skills Excellence (BASE). This will remain a key focus throughout the lifetime of this project and long after the regeneration of the area has completed.

“This is such an iconic landmark that Malaysians are very proud to have invested in. Not only are we entrusted to restore the Power Station to its former glory but we are also committed to delivering a world-class destination for all to enjoy.”

Stuart Harvey, TfL’s Director of Major Projects, said: “The Northern Line extension will bring Battersea and surrounding areas to within 15 minutes of the West End and City. Not only will it provide better transport connections to this part of south London but it will also enable the regeneration of the area, spurring economic growth by supporting around 25,000 new jobs and more than 20,000 new homes.”