Boris Johnson today signalled the start of major works that will see the excavation of 600,000 tonnes of earth from beneath south London for the construction of the Northern line extension. 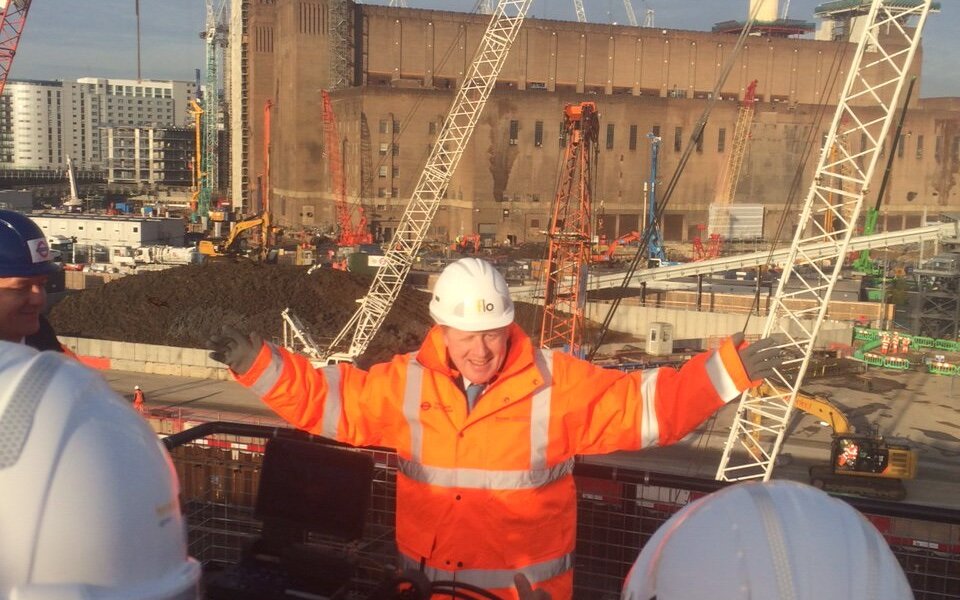 • Using the Thames to transport 600,000 tonnes of waste will remove over 40,000 lorry journeys by road and prevent 2,000 tonnes of carbon emissions

• Two new 3.2km tunnels and two new Tube stations will be built as part of the extension, targeted for completion in 2020

The Mayor of London today signalled the start of major works that will see the excavation of 600,000 tonnes of earth from beneath south London for the construction of the Northern line extension.

Boris Johnson MP gave the signal to start up a specially-designed 300m long conveyor belt that will transport the equivalent in weight of 50,000 New Routemaster buses to the banks of the River Thames as part of the project to extend the Northern line from Kennington to Battersea via Nine Elms.

Two new 3.2km tunnels will be constructed and two new stations built: one at the heart of the Battersea Power Station redevelopment and another at Nine Elms to the east, serving new developments such as the US Embassy and the redevelopment of New Covent Garden Market, as well as existing communities.

Waste generated by the construction of the station and tunnels will be loaded on to barges and taken to Goshems Farm in East Tilbury in Essex, where it will be used to create arable farmland. Tunnelling for the Northern line extension is due to begin in early 2017 and will take six months to complete. At its peak, up to 26 barges a week will leave the Battersea site, each carrying around 1,000 tonnes of earth to Essex by river.

Transporting the excavated material in this way will remove over 40,000 lorry journeys from the Capital’s busy roads, reducing traffic congestion and helping to keep cyclists and pedestrians safe. It will also reduce the site’s carbon footprint by 2,000 tonnes of CO2.

The project, which is being funded entirely through the private sector, will enable the regeneration of Vauxhall, Nine Elms and Battersea [Nine Elms on the South Bank], spurring economic growth by supporting around 25,000 new jobs and 20,000 new homes, including around 4,000 properties that are available exclusively to local people through a range of affordable housing schemes.

During construction, the Northern line extension will support around 1,000 jobs, which will have a positive impact on the whole UK economy, including around 50 apprenticeships through the supply chain across the country.

The wider Nine Elms regeneration programme is also on course to provide around 22,000 construction jobs, including apprenticeships, graduate opportunities and other starter roles for young Londoners.

Extending the Northern line to Battersea and Nine Elms is a core part of a range of works taking place to improve service levels on the line. Northern line passengers are already benefiting from new signalling, which is providing a 20 per cent increase in capacity through central London during peak times – enough for an additional 11,000 passengers per hour.

Once the extension opens, LU is planning to increase train frequencies on the Northern line to at least 30 trains per hour with the introduction of new trains. The extension will cut journey times to the West End and the City to just under 15 minutes.

The Mayor of London, Boris Johnson, said: “The whirring into action of this fantastic machine marks a key moment in the delivery of the Northern line extension. This gigantic conveyor belt will enable a staggering 600,000 tonnes of material to be excavated from beneath south London and transported safely by barge on the Thames.

“Once built, the extension of the Northern line will act as a major spur to regeneration and growth in the area. It will open up the Tube to thousands more Londoners, cut journey times and act as a catalyst for the creation of much-needed new homes and jobs. It is one of a number of major ongoing investments we’re making into improving London’s transport infrastructure, which will be ever more important as our city continues to grow.”

Nick Brown, Managing Director, London Underground, said: “The extension of the Northern line is key to supporting and enabling homes, jobs and economic growth in this area. It will also transform transport links into the West End and the City, making them just under 15 minutes away. This extension, alongside our work to modernise the Tube network, will help us keep pace with the city’s sharply rising population, and will create jobs through the supply chain across the UK. We must now continue to invest and build for the city’s future, including the vital construction of Crossrail 2.”

Ravi Govindia, leader of Wandsworth Council, said: “This Tube extension is transforming the fortunes of north Battersea. Around these new underground stations we’re building more than 6million square feet of new commercial and cultural space which will make Nine Elms a lively and exciting new addition to London’s South Bank. The regeneration programme is one of the greatest sources of new jobs and homes in the country and this would not be possible without the Tube link.”

*For more information about the extension to the Northern line and the funding package please visit https://tfl.gov.uk/travel-information/improvements-and-projects/northern-line-extension

*The full cost of the Northern line extension is expected to be up to £1bn, which is being funded entirely by the private sector through a package agreed between Battersea Power Station, Wandsworth Council, Lambeth Council, the Mayor of London and Government, which includes the creation of an Enterprise Zone from 2016 for a period of 25 years.

*The Northern line extension will excavate around 680,000 tonnes of material in total over the lifetime of the project during the construction of stations and the 6.4kms of new tunnels. Ninety two per cent of the excavated material will be carried by river and is expected to be clean, uncontaminated and reusable elsewhere.

* In 2014 TfL awarded the contract to design and build the Northern line extension to Ferrovial Agroman Laing O’Rourke.

*The transportation of excavated materials complements the wider aims of the Mayor’s River Action Plan, which sets out improvements that will be made to river services between now and 2020 and to ensure London makes the most of the Capital’s waterway. For more information see here: https://tfl.gov.uk/corporate/publications-and-reports/river-action-plan