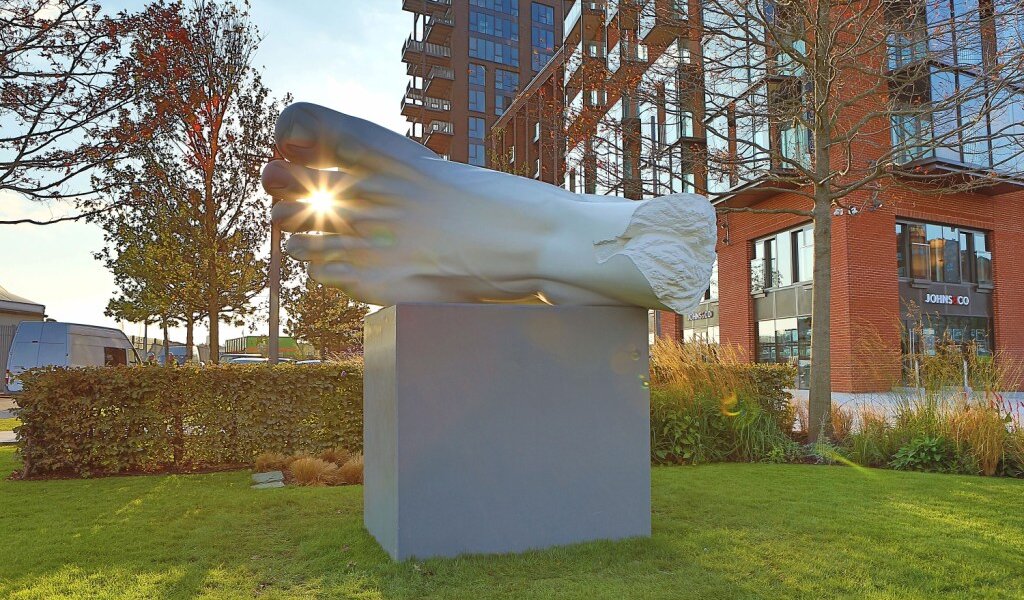 Last night Embassy Gardens, in Nine Elms on the South Bank, was given further creative flair with the unveiling of three sculptures in the first segment of the new linear park – a new beautifully landscaped, green public route linking Battersea Power Station to Vauxhall. The works are part of an important new cultural programme and were curated by former Academy Exhibitions Director Sir Norman Rosenthal, together with Sean Mulryan, Chairman and CEO of Ballymore Group, the developer behind Embassy Gardens.

The sculptures were unveiled by Sean Mulryan and Sir Norman Rosenthal. Sarah Lucas, Mohammed Qasim Ashfaq and Simon Fujiwara were the inspirational artists behind the impressive pieces presented to the gathered guests, who included local artists and cultural personalities from Nine Elms. The outstanding works of art will engage the public and play an important part in creating a sense of place around Embassy Gardens.

Sarah Lucas, currently representing Britain at the Venice Biennale, has taken inspiration from Embassy Gardens’ proximity to New Covent Garden Market to create a sculpture that takes the form of a giant marrow cast in bronze. Her work, Florian, conveys the humour and spontaneity of London, the city in which she was born. An artist who continues to challenge boundaries and convey a sense of fun, Lucas’s work will prove an eye-catching talking point.

Mohammed Qasim Ashfaq’s piece, ROD, which is made of steel, resembles a lightning bolt striking the ground. Qasim Ashfaq is a Scottish artist based in London and is known for focusing on shape, line and form. He was recently hailed as a ‘bold new voice in British art’; his work draws inspiration from diverse areas, from Islamic art to science fiction.

Simon Fujiwara is a rising British-Japanese artist who made his mark in 2012 exhibiting at Tate St. Ives. A reflective piece, Fujiwara’s sculpture is titled Modern Marriage and comprises a large foot with a ring embedded in the sole. The piece is in keeping with the emotive and often autobiographical nature of his work.

Curator Sir Norman Rosenthal said: “Thanks to Ballymore and its chairman Sean Mulryan – together with active support from Wandsworth Council, London is the recipient of three splendid new sculptural installations. They are each highly imaginative, witty and thought-provoking works by three outstanding young British sculptors, taken together they represent perfectly the rich diversity of London’s cultural art scene”

Sean Mulryan, chairman and CEO of Ballymore Group, said “Central to our vision for Embassy Gardens is creating a sense of place and these sculptures will add to the rich cultural diversity of Nine Elms. The new linear park will draw on the heritage of London’s great parks and will bring public vibrancy to the area – creating a space for community, culture and connections.”

Cllr Ravi Govindia, Leader of Wandsworth Council, added: “Nine Elms is fast becoming a new cultural destination on London’s south bank. The area is on course to be a showcase for the best of British talent and home to a rich variety of artworks, events and vibrant cultural venues. These three fine works are very welcome additions to Nine Elms’ growing list of attractions.”