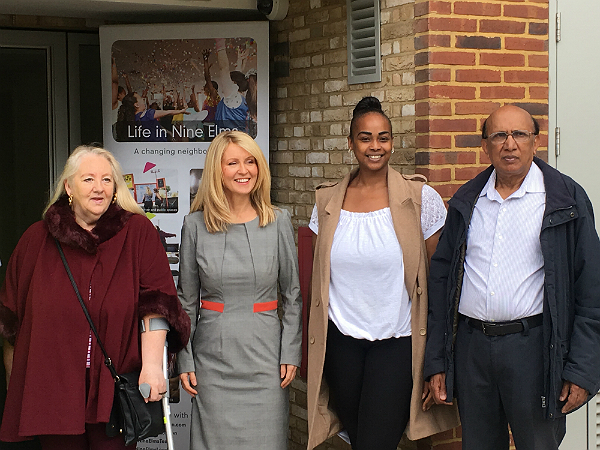 Minister of State for Housing Rt Hon Esther McVey came to Nine Elms to meet residents at a new council homes development and mark the 100th anniversary of social housing.

Three new developments in Nine Elms will deliver 57 new council homes to rent, and they are all named after local First World War soldiers who were awarded the Victoria Cross.

One hundred years ago, the Addison Act gained royal assent to provide council housing with support from central Government for the first time. The Addison Act was introduced following the post-war Government’s pledge to build homes “fit for heroes” in the aftermath of the First World War.

Corporal Edward Foster was awarded the Victoria Cross for capturing two enemy machine guns during an attack in a French village in 1917.

The Minister met residents from the Savona estate and surrounding estates during her visit on 31 July 2019.

The development is part of work by Wandsworth Council to increase social and affordable housing in the borough – including its pledge to deliver 1,000 new council homes.

Cllr Kim Caddy, Wandsworth Council’s cabinet member for housing, said: “I am very happy to welcome the Housing Minister to Wandsworth on the day of the centenary of the Addison Act and proud that Wandsworth is playing its part with our 1000 homes scheme and our two major regeneration projects.

“Here in Wandsworth we have approved a wide ranging package of measures, including buying and building new homes so we can ensure that people in genuine need receive help and support and can be offered permanent homes close to the areas they grew up in. We are also committed to surpassing the London Plan targets set by the London Mayor including increasing the supply of affordable homes with 3,000 built over the past decade, another 1,700 due to be completed within the next three years and a target of 18,000 over the coming decade.”

Minister of State for Housing Rt Hon Esther McVey said: “It was a privilege to meet the residents of the Savona estate today, on the 100th birthday of Britain’s council housing.

“For the past 100 years, council housing has provided a decent, affordable, secure home for millions of people in this country, and I want to see it continue to play a key role for the next 100 years and more.

“I want the people who move into Edward Foster Court to be as proud of their new homes as we are of the First World War hero after whom it is named.”