Totally Thames, the Nine Elms Vauxhall Partnership, Wanda One (UK) and Vauxhall One are delighted to announce that, by popular demand, Nine Elms on the South Bank and London’s newest and favourite resident, HippopoThames, has chosen to visit friends at St Katharine Docks where he will remain for a further 28 days. 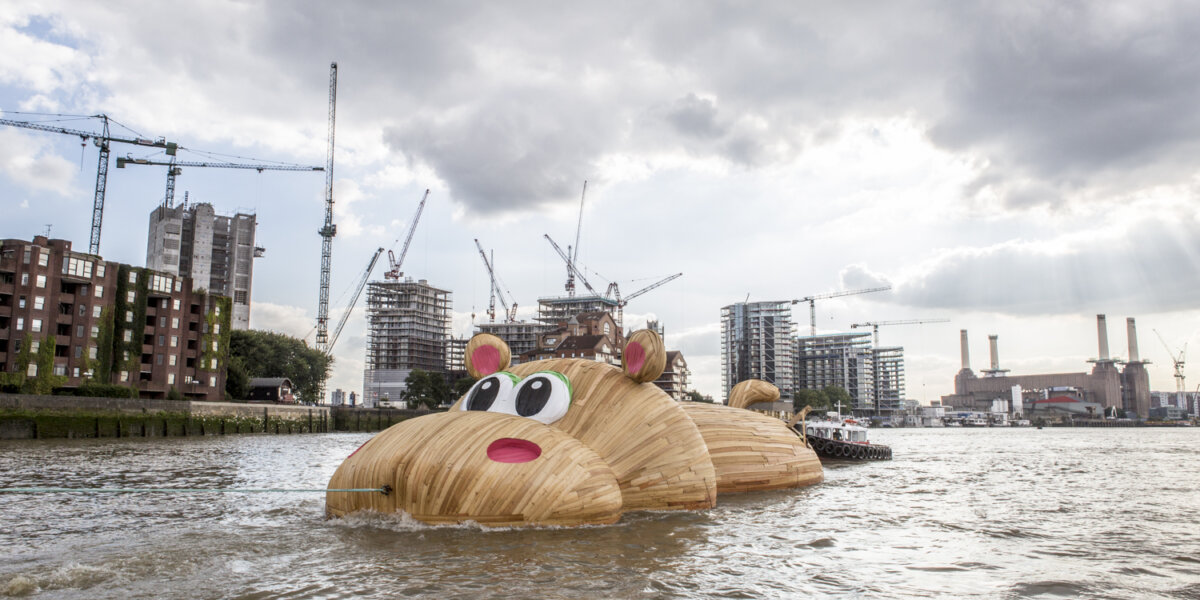 [London: 29 September 2014] Totally Thames, the Nine Elms Vauxhall Partnership, Wanda One (UK) and Vauxhall One  are delighted to announce that, by popular demand, Nine Elms on the South Bank and London’s newest and favourite resident, HippopoThames, has chosen to visit friends at St Katharine Docks where he will remain for a further 28 days.

Launching the inaugural Totally Thames season of river events, HippopoThames arrived at Nine Elms on the South Bank at the beginning of September, taking in a host of iconic London landmarks en route including the London Eye, Tower Bridge and Houses of Parliament. For the past 28 days, he has basked in the shadow of one of London’s favourite landmarks Battersea Power Station, in full view of the changing skyline within central London’s newest district.

During his month-long stay at Nine Elms on the South Bank, HippopoThames has captured the hearts of local residents and attracted visitors from around the world. Guided foreshore access has enabled passers-by to get up close and personal and HippopoThames has also received the ultimate accolade – a spoof Twitter account in his honour.

The first UK commission of renowned Dutch artist Florentijn Hofman, HippopoThames was commissioned by Thames Festival Trust with support from the Mayor of London, the Nine Elms Vauxhall Partnership, Wanda One (UK) and Vauxhall One. The installation is semi-immersed in the river and rises and falls with the tide. Hofman is known for scaled-up sculptures, such as Rubber Duck which has been travelling to several major cities including Auckland, Sao Paulo and Hong Kong, since 2007. Hofman’s sculptures often originate from everyday objects, but the design of Hofman’s first UK commission has been inspired by the fascinating prehistory of the River Thames, and the hippos that used to inhabit it.

Other Totally Thames activities in the area have included a theatrical walking tour with White Rabbit, a month-long exhibition at nearby Pump House Gallery in Battersea Park and a Natural History Museum talk at The Doodle Bar, which explored the pre-history of the Thames that in part inspired Hofman’s sculpture.

Adrian Evans, Totally Thames Director, said: “Our aim for September was for the River Thames, the capital’s greatest natural asset, to be a source of constant inspiration and delight. Through the commission of amazing projects and working with partners in all of London’s 17 riverfront boroughs, the 2014 Totally Thames has seen the biggest and most exciting season of river events in the world. It is truly heart-warming to see HippopoThames extend this season for one more month.”

Helen Fisher, Programme Director at Nine Elms on the South Bank, said: “We have been delighted by the worldwide appeal of HippopoThames, and could not be happier that he will remain in London for 28 more days. We are proud to be sharing this great gift with St Katharine Docks and all Londoners.”

Totally Thames is delivered by the Thames Festival Trust in partnership with London First, London’s leading business body, London & Partners, the Mayor’s official promotional organisation for London, the Mayor of London, Arts Council England and dozens of partners in the riparian boroughs.

About Florentijn Hofman: Dutch artist Florentijn Hofman (Delfzijl, 1977) likes his works large, very large. His monumental sculptures conjure up humour and sensation. His most well-known work Rubber Duck (2007), a 26-metre-high inflatable yellow rubber duck, signified his international breakthrough. The rubber duck has been travelling the world ever since. Everywhere it moors – from Auckland and Sao Paulo to Osaka – it is bound to cause a spectacle.

Everyday objects like a paper boat, a pictogram of an industrial zone or little plastic toy figures are at the root of Hofman’s images. These ready-mades are blown up to gigantic proportions, in a resemblance to the visual language of Pop Art. The Kobe Museum of Art, the Nantes Biennial, Z33 in Hasselt and SESC in Sao Paulo are among the institutions that have recently commissioned works by Hofman.

About Thames Festival Trust: Since 1997 when the famous wire walk took place across the Thames in central London, the Thames Festival Trust has organised 16 fun, free festivals along and on the river.  What started as an event around the South Bank has stretched to embrace the length of the river from Westminster to Tower Bridges and St Katharine Docks. Thousands of events have been organised in that time from street carnivals to sand castles on the foreshore, from fireworks to family feasts on a bridge. Over 10 million people have enjoyed the Thames Festival since 1997, reaching a peak in 2012 when more than 800,000 people spent the weekend celebrating the end of the London Games. Today the Thames Festival Trust, led by Artistic Director Adrian Evans, who was the Pageant Master for the Queen’s Diamond Jubilee river celebrations, is expanding the concept from central London to the whole river in London, from Richmond to Havering, under the banner Totally Thames. TFT is funded by Arts Council England, the Mayor of London, London First and many other sponsors and supporters.

About London First: London First is an independent business membership organisation whose mission is to make London the best city in the world in which to do business.  Its members include the capital’s leading employers in key sectors such as financial and business services, property, transport, ICT, education, creative industries, hospitality and retail.  Established in 1991, its work encompasses a wide range of issues under the umbrella of maintaining London’s competitiveness in an increasingly challenging environment.

About London & Partners: London & Partners is the Mayor’s official promotional organisation for London. Our company attracts and delivers value to business, students and visitors. London & Partners is a not-for-profit public private partnership, funded by the Mayor of London and a network of commercial partners. Our remit is to drive leisure and business visitors as well as bidding to secure major events in London, to unlock the city for overseas businesses who want to set up or expand in London and to promote the capital’s world class universities to international students. Our intention is to work in partnership with organisations in London and across the world to deliver our goal – that London be globally recognised as the best big city on earth.

About Nine Elms on the South Bank: Nine Elms on the South Bank is the £15 billion opportunity area between Lambeth Bridge and Chelsea Bridge, and is one of the largest regeneration projects in Europe. The area will be transformed from one of the capital’s last remaining industrial districts into a world-class destination right in the heart of London. Already home to Battersea Power Station and New Covent Garden Market, the area will also become home to the new Embassy of the Kingdom of the Netherlands, the new U.S. Embassy and a new town centre at Vauxhall. Underutilised industrial land is making way for new public squares, parks, schools, Tube stations, homes, and businesses, which will drive growth and create jobs and homes. It will become a strikingly modern addition to the cityscape and a new centre for culture on London’s South Bank.