Florentijn Hofman’s first ever UK commission: at Nine Elms on the South Bank

Totally Thames is delighted to announce Florentijn Hofman’s first ever UK commission. The renowned Dutch artist will create an extraordinary new sculpture to be situated in the River Thames at Nine Elms on the South Bank. 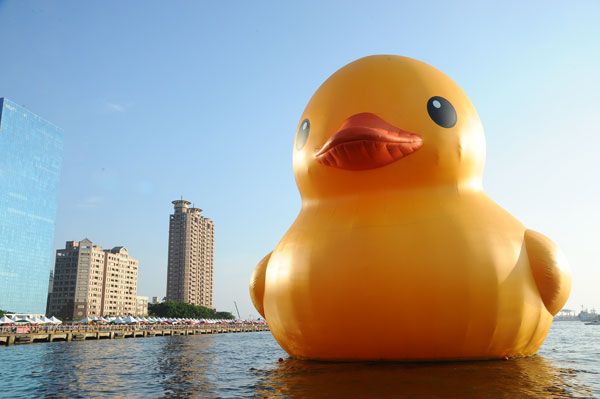 Totally Thames is delighted to announce Florentijn Hofman’s first ever UK commission. The renowned Dutch artist will create an extraordinary new sculpture to be situated in the River Thames at Nine Elms on the South Bank, central London’s newest district. The piece is commissioned by Totally Thames with support from the Mayor of London, the Nine Elms Vauxhall Partnership, Wanda One (UK) and Vauxhall One. Hofman will launch the installation on 2 September, and it will remain in situ until 30 September throughout the month of Totally Thames.

The installation will be semi-immersed in the river and will rise and fall with the tide. Hofman is known for scaled-up sculptures, such as Rubber Duck which travelled to several major cities between 2007 and 2013, from Auckland and São Paulo to Hong Kong. Hofman’s sculptures often originate from everyday objects, but the design of Hofman’s UK commission (which will be a closely guarded secret until its unveiling on 2 September) has been inspired by the fascinating prehistory of the River Thames.

Hofman said, “I am thrilled and excited to be using the Thames as the location of my first UK commission. The purpose of setting my sculptures in the public domain has always been to give members of the public a break from their daily routines, to inspire conversation and to cause astonishment. I hope the location of my sculpture on the Thames will inspire passers-by to engage with its surrounding area of Nine Elms on the South Bank, and to discover the various other events within the Totally Thames programme celebrating London’s river”.

The launch on Tuesday 2 September will reveal the sculpture when it is towed upriver from its build site to its end position at Nine Elms on the South Bank, an emerging new cultural destination with Vauxhall at its heart; the last piece of the South Bank jigsaw.

Ravi Govindia, co-chair of the Nine Elms Vauxhall Partnership and leader of Wandsworth Council said: “At Nine Elms on the South Bank we are creating a new centre for arts and creativity right in the heart of London. This new commission is another example of the district beginning to establish itself as an exciting new cultural destination.”

The commission also launches an annual strand within Totally Thames called ‘River Edge’, a developing sculpture trail initiative for the Thames featuring work that will be hidden and revealed by the tide, float on the water or frame the river environment, commissioned by Thames Festival Trust with the Nine Elms Vauxhall Partnership and its partners.

Totally Thames is delivered by the Thames Festival Trust in partnership with London First, London’s leading business body, London & Partners, the Mayor’s official promotional organisation for London, the Mayor of London, Arts Council England and dozens of partners in the riparian boroughs.

About Florentijn Hofman: Dutch artist Florentijn Hofman (Delfzijl, 1977) likes his works large, very large. His monumental sculptures conjure up humour and sensation. His most well-known work Rubber Duck (2007), a 26-metre-high inflatable yellow rubber duck, signified his international breakthrough. The rubber duck has been travelling the world ever since. Everywhere it moors – from Auckland and São Paulo to Osaka – it is bound to cause a spectacle.

Everyday objects like a paper boat, a pictogram of an industrial zone or little plastic toy figures are at the root of Hofman’s images. These ready-mades are blown up to gigantic proportions, in a resemblance to the visual language of Pop Art. The Kobe Museum of Art, the Nantes Biennial, Z33 in Hasselt and SESC in São Paulo are among the institutions that have recently commissioned works by Hofman.

Florentijn Hofman was educated at the Art Academy Kampen and the Kunsthochschüle in Berlin. He lives and works in Rotterdam.