Totally Thames announces major free event: a spectacular Fire Garden at Battersea Power Station this September. Thousands of people are set to enjoy a free event on 5 and 6 September 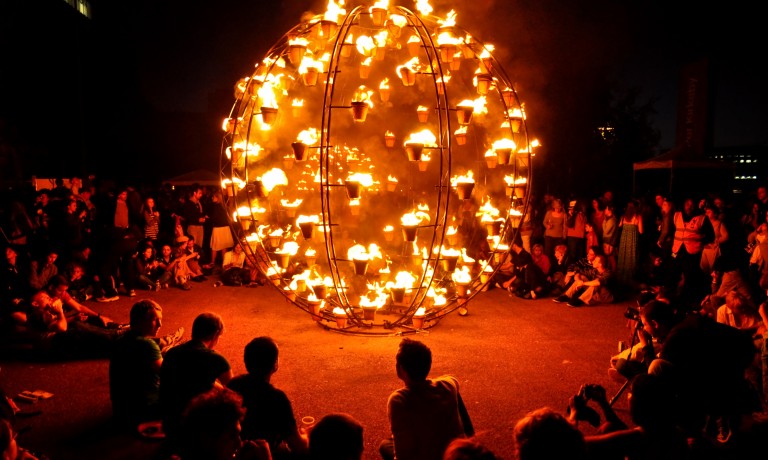 On the evenings of Friday 5 and Saturday 6 September, visitors will be invited to wander around the maze-like “Fire Garden” at the Pop-up Park, an adornment of cascades of outdoor candles, magical fire displays, automated mechanical structures and large hand-operated fire blowers.

The renowned French troupe Carabosse will create fire alchemy at its very best: the smell of wax, the hiss of steam, and the heat and glow of the multiple fires will acknowledge and celebrate this iconic site’s heat-filled, gritty, smoke belching, industrial past. Globes of fire and festoons made up of flame will adorn the garden, illuminating the Power Station with thousands of flickering points of fire. The atmosphere will be intensified by live musicians playing a mix of archaic Parisian music and improvised sounds.

The Fire Garden is presented in association with Time Out. Admission will be free of charge and for crowd control purposes tickets will be issued via a free public ballot (details can be found at www.totallythames.org). Entries can be made from Tuesday 12th to Wednesday 27th August. Winners will be picked at random and notified by e-mail. A limited number of tickets will be available on the door – please check Totally Thames Twitter @TotallyThames for updates.

David Twohig, Head of Design and Placemaking at Battersea Power Station Development Company, said: “We are extremely excited to host Fire Garden with Totally Thames to celebrate two of London’s most beloved landmarks: the grand River Thames and Battersea Power Station. The event will fire the senses and illuminate the Power Station in the most stunning style ahead of its redevelopment.  We are proud to play a part in bringing the team behind the brilliant Thames Festival to the Nine Elms on the South Bank area and look forward to welcoming Londoners and visitors to the city alike.”

Joyce Wilson, Area Director, London, Arts Council England, said: ‘We are proud to support Thames Festival Trust to produce Totally Thames, a wonderful mixed-arts festival that engages artists, arts organisations, businesses and audiences in a celebration of the River Thames. This year we are particularly excited to be able to support a special commission by Thames Festival Trust through our Exceptional awards programme. It will see French artists Carabosse produce a fire-garden spectacular – the biggest ever seen in the UK – that will create an illuminating salute to one of London’s most iconic buildings, Battersea Power Station.’”

The Fire Garden is part of the wider programme of Totally Thames events held across Nine Elms on the South Bank, including an extraordinary new sculpture for the River Thames from renowned Dutch artist Florentijn Hofman – known for his outsized Rubber Duck – representing his first ever UK commission. The various public events and artistic offerings of Summer 2014 in Nine Elms are part of the area’s regeneration as central London’s newest neighbourhood for the arts that extends the cultural vibrancy of the South Bank from Chelsea Bridge to Lambeth Bridge.

This commission is only possible thanks to the support of public funding by the National Lottery through the Arts Council’s Exceptional award programme, funds from The Mayor of London and sponsorship from Battersea Power Station Development Company. Upon exiting the site, audience members will be asked to make a donation to support the creation of new work for Totally Thames in 2015.

The Fire Garden is provided free with tickets issued via a public ballot (details at: www.totallythames.org)