A world class Design Team led by Denmark’s Bystrup Architecture Design and Engineering is now starting a programme of exploratory works for a new car-free bridge across the Thames in central London. 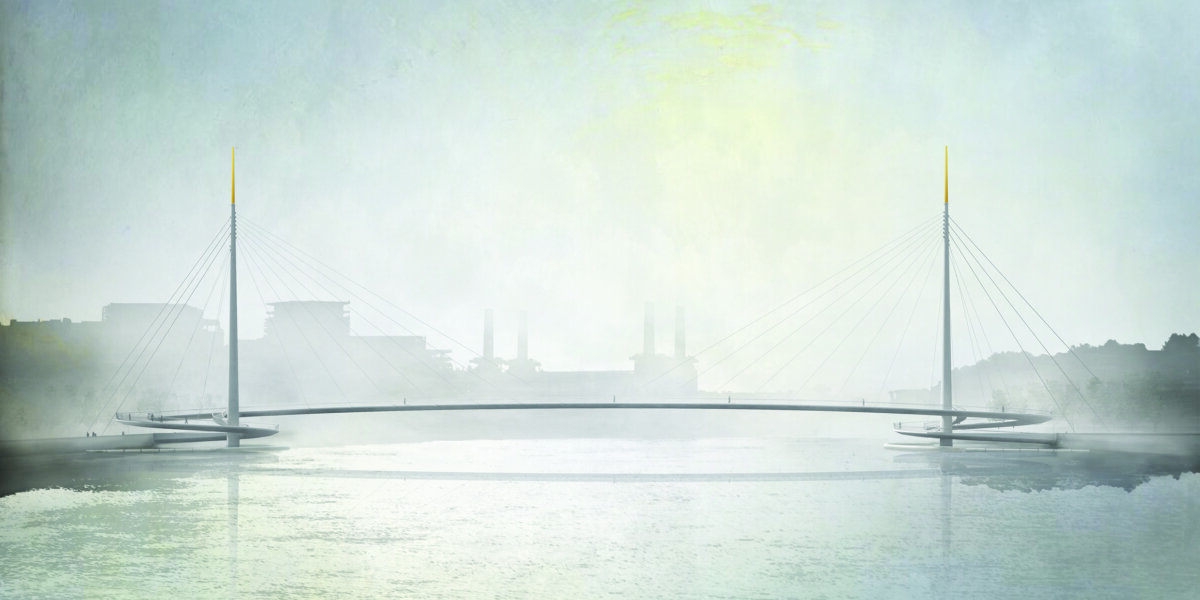 A world class Design Team led by Denmark’s Bystrup Architecture Design and Engineering is now starting a programme of exploratory works for a new car-free bridge across the Thames in central London.

The announcement comes as London authorities and the Mayor take steps to address the city’s serious air quality problems and promote the shift towards zero-emission transport options.

Bystrup, who will work with London Architects Robin Snell and Partners, Engineer COWI, and Consultants AECOM, have been commissioned by Wandsworth Council to design the Nine Elms Pimlico Bridge, which is set to be one of the first Thames crossings built specifically to meet the needs of both pedestrians and cyclists.

The team was selected following an international design competition and the first stage of work will involve examining the feasibility of the different location options for a new bridge along this part of the Thames, which is the longest stretch of riverside in central London without a crossing point. The team will share its findings once this work is complete.

A new bridge linking Nine Elms and Pimlico was first proposed back in 2003 by the Cross River Partnership to fill the long gap between Chelsea and Vauxhall Bridges. It is supported by the London Plan and Transport for London (TfL) has completed a feasibility study which concludes the scheme is viable and exceeds Government value for money thresholds.

£26 million in private funding for this sustainable transport link is identified from the development of Nine Elms and, according to TfL’s feasibility study, the project would pay for itself twice over in terms of reduced journey times and other benefits.

The outline design concept developed by the Design Team could work at each of the different location options identified by TfL’s earlier study. The unique spiralling form of the concept design would provide sufficient clearance for large river boats to pass underneath without creating steps or steep slopes which inhibit movement. By minimising the need to build on the riverbanks, valuable space on each side of the river is preserved. The concept design includes innovative features such as textured surfaces and recessed lighting to safely guide pedestrians and cyclists along a shared surface.

Lead designer Erik Bystrup said: “Our design concept is based on an elegant bridge that provides simple and uninhibited access for all, with minimal impact on each bank. This will be one of the very first shared pedestrian and cycle bridges over the Thames, adding to the rich history of London’s river crossings.”

“A new bridge linking Nine Elms and Pimlico has been talked about for many years and we only have to look at a map to see why. This is the longest stretch of riverbank in central London without a crossing point and as our city’s growth continues we must provide the new transport infrastructure to meet rising demand.

“The regeneration of Nine Elms will provide £26million in private funding for this scheme and London’s very serious pollution problem demands that we develop clean and sustainable infrastructure wherever its business case is proved.  As a city, we have to show that London is open for business and we have to take every opportunity to encourage the shift towards zero-emission forms of transport. This bridge delivers on both and would be a stunning new addition to the river.”

Both the Mayor of London’s London Plan and the Nine Elms, Vauxhall, Battersea Opportunity Area Planning Framework include a proposed bridge linking Nine Elms to Pimlico.

In 2013, Transport for London published a feasibility study confirming a pedestrian and cycle bridge could be built here.

In late 2014, Wandsworth Council launched a competition to find a professional team which could help develop a bridge design.

In November 2015, the Jury Panel selected by Wandsworth Council unanimously chose the design of a team led by Bystrup Architecture Design and Engineering. In total, the design competition attracted 74 entries.