A design team led by Bystrup Architecture Design and Engineering is on course to win the Nine Elms to Pimlico Bridge competition following a unanimous endorsement from the contest’s jury panel. 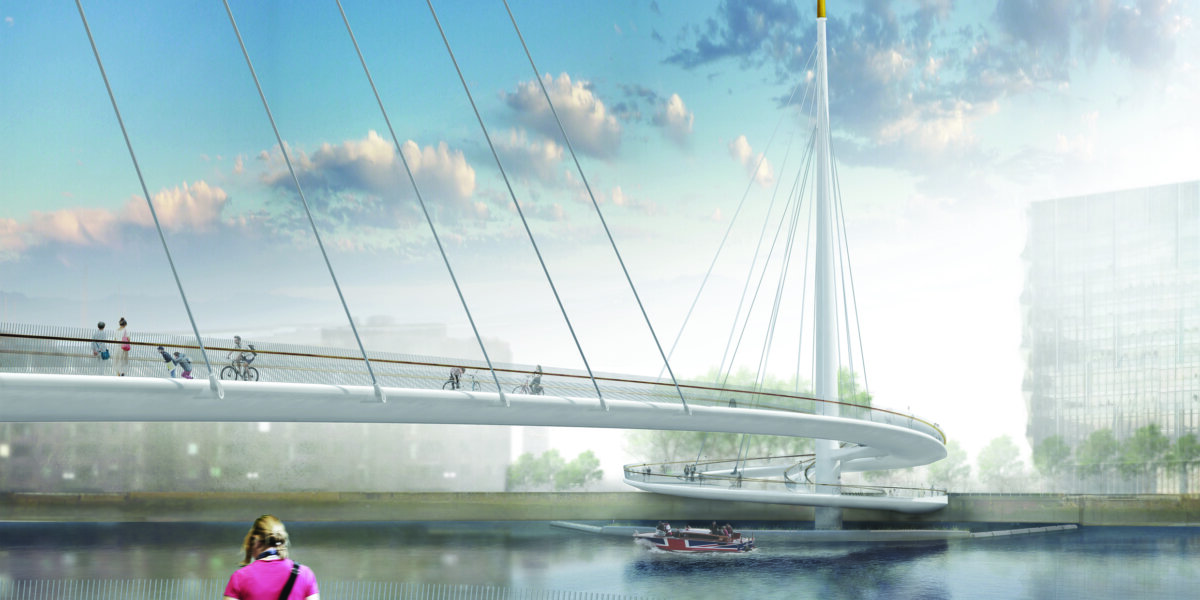 A design team led by Bystrup Architecture Design and Engineering is on course to win the Nine Elms to Pimlico Bridge competition following a unanimous endorsement from the contest’s jury panel.

The recommendation, if followed by Wandsworth’s Council, would see the team named preferred bidder for the project and tasked with developing detailed plans for central London’s first car-free bridge for cyclists and pedestrians.

The competition began earlier this year with the aim of identifying world class architects and engineers to take on the project. It attracted 74 entries from across the globe including some of the best known names in the design industry.

A summary of the initial design proposals from the jury panel’s preferred team can be viewed online.

“This was an extremely difficult choice between four excellent teams, but ultimately we felt that Bystrup and their partners had the most compelling approach to the challenges posed in our brief. Their strategy is elegant and simple, they aspire to celebrate the river and create a thing of real beauty which is what this bridge should be.

“Their light touch approach to landing points is commendable and the exploration of lighting and textured surfaces to manage movement across the bridge is both interesting and inventive. They see the bridge as a sustainable transport link and piece of new public realm which should be attractive, fun and a pleasure to use.”

Erik Bystrup, speaking on behalf of the team, said:

“We are delighted to have this fantastic opportunity to design a new, modern piece of infrastructure for London. From the outset we wanted to design an elegant bridge that provided simple and uninhibited access for all, with minimal impact landings on each bank. We are very excited that this will be the first shared pedestrian and cycle bridge over the Thames, adding to the rich history of London’s river crossings.”

Ravi Govindia, leader of Wandsworth Council and member of the jury panel, said:

“This team has impressed at every stage of the competition, combining light and graceful design ideas with an inventive approach to the core transport challenges. We are convinced they have the talent to develop a successful bridge design which would be both a valuable river crossing and a beautiful addition to the Thames.”

The panel’s recommendation will be discussed later this week by Wandsworth Council’s finance and corporate resources committee. A final decision will be made by the council’s executive group on November 30.

Amongst the most difficult puzzles which the winning design team has had to overcome is the bridge height which has to rise high above the banks so large vessels can pass beneath. This has been done without creating slopes too steep for cyclists and pedestrians.
It needs to be fully accessible for disabled people, and bikes and walkers travelling in both directions must be able to get across safely and effectively without coming into conflict.

Other key challenges include:

• Creating a fitting landmark which is sensitive to the different urban characteristics of each shoreline and elegant in its own right
• Providing a safe and attractive link for pedestrians and cyclists crossing the river, encouraging sustainable travel between the two banks
• Complying with the Disability Discrimination Act; ensuring it is accessible to all
• Minimising the loss of open space and positively enhancing the public realm where it lands on either bank
• Achieving a safe and efficient integration with the transport network on both banks

A TfL transport study confirms the Nine Elms to Pimlico bridge has a strong business and transport case and would provide another valuable route through central London supporting the shift towards zero emission, sustainable travel options.

A £26million contribution is already identified from the development of Nine Elms and further funding options will be explored in tandem with developing a detailed design.

The bridge is part of the infrastructure package needed to provide access to the new Nine Elms on the South Bank district where tens of thousands of new jobs and homes are now being created alongside new shopping and cultural attractions.

The competition is being managed by Colander Associates and follows OJEU public sector procurement processes so the successful design team can be appointed to the project.

The scheme would need to go through the planning system before it could be built, and would need consent from Wandsworth and Westminster Councils, as well as the Mayor of London.

Where did the bridge idea come from?

• A new bridge across for this stretch of the river is part of the Mayor’s London Plan.
• the bridge is included in the Nine Elms, Vauxhall, Battersea Opportunity Area Planning Framework.
• In 2013, Transport for London published a feasibility study confirming a pedestrian and cycle bridge could be built here and has a strong transport case.
• In late 2014, Wandsworth Council launched a competition to find a professional team which could help develop a bridge design.

Who is running this competition?

Colander Associates is running the competition on behalf of Wandsworth Council. Lambeth Council, Westminster Council, Transport for London, Greater London Authority and the Port of London Authority have helped shape the brief, the process and fed back on the submissions. These organisations, along with others, formed a Strategy Group which planned the competition format and selected the Jury Panel members.

Has there been any consultation?

Has the design been chosen?

Where is the bridge going to land?

This has not been decided and several options are being considered. Transport for London’s feasibility study sets out five options on this stretch of the river where a bridge could be accommodated. For the purpose of the competition Option 1 was selected to compare entries like for like. Entrants were also required to explain how adaptable their design approach would be for other locations.

Transport for London’s study highlights options 1 and 2 as having the strongest transport case and benefits.

Why do you need a bridge here?

• The distance between Vauxhall Bridge and Chelsea Bridge is more than double the average gap between river crossings in central London. Currently it would take someone on the north bank approximately more than 20 minutes to walk to the new Waitrose on the opposite bank. With a bridge this would fall to approximately 3 minutes.
• London’s population is at an all time high and growing, putting immense pressure on transport networks including the existing river crossings. New cycle and pedestrian links will help to meet rising transport demand and encourage sustainable, zero-emission forms of travel.
• The Nine Elms area to the south of the proposed bridge is growing so transport demands are rising particularly fast in this part of central London.
• An integrated package of transport upgrades is needed to make Nine Elms an accessible part of the city. The bridge would be an important component, helping people to reach the 6.5 million sqft of new culture, leisure, office and retail space that is now being built.

How much would it cost?

TfL’s feasibility study estimated the costs to be in the region of £40 million, but the final price will depend on the design solution developed.

Who would pay for it?

So far £26million has been earmarked for the scheme from the income generated by new private development sites in the Nine Elms regeneration area. All options for generating further funding will be explored in tandem with developing the bridge design.

Would it be accessible to disabled people?

Yes. Accessibility is one of the key design features being considered.

Who would be able to use the bridge?

The bridge would be free to use, accessible to all and open 24 hours a day.

Does it have planning permission?

No the design has not been agreed. The competition is to select a team with whom design ideas can be developed. The scheme would require planning consent from Wandsworth and Westminster Councils.

When will it be built?

At this early stage there is no planning or construction timeline, so it would be premature to predict a completion date.

What are the next steps?

To work with communities and stakeholders on both sides of the river to develop a detailed design which could be taken through the planning process.