The team at Battersea Power Station is getting behind the Heads Together mental health campaign by installing its signature headband on the north-east chimney of the Power Station. The Heads Together campaign, led by Prince Harry and the Duke and Duchess of Cambridge, is the Charity of the Year for the London Marathon on Sunday (23rd April). 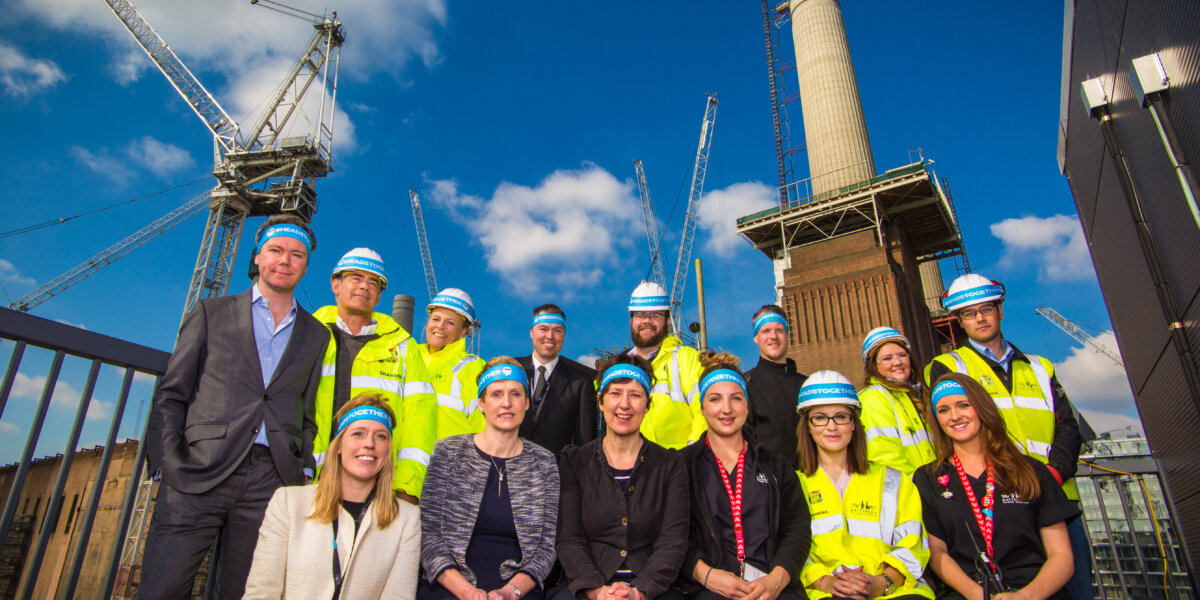 The chimney will proudly wear its headband in the lead up to the Marathon, to coincide with a number of other mental health initiatives occurring throughout the week to help raise awareness of the issue.

The team of on-site nurses at the Power Station will be holding stress drop-in sessions and talks on how to look after your mental well-being for all workers. There are also eight mental health Skanska ambassadors working on site which have been through comprehensive training and volunteer a few hours of their time a week to provide support and raise awareness of the issue to the construction workers. There are over 3,000 construction operatives currently working on the Battersea Power Station project. According to research commissioned by Public Health England (PHE), male construction workers have a higher than average risk of developing mental health issues.

The Battersea Power Station Foundation has also provided grants to a number of mental health charities that reside in Wandsworth or Lambeth borough, including Black Thrive, Battersea Befriending Network and Commons CIC. More information on these charities can be found here.

“On behalf of our shareholders, we are delighted to be supporting the Heads Together campaign with one of our newly rebuilt chimneys at Battersea Power Station sporting a blue headband in the lead up to this year’s London Marathon. Mental health is a really important issue which is finally getting the attention it deserves and we wish all those running this Sunday the best of luck.”

“Whether it’s flying pigs or giant headbands, stunts involving this magnificent building have the power to command attention like no other! I’m delighted this world famous landmark will be broadcasting support for such a vitally important cause and I want to thank everyone who has helped make it possible. The Battersea Power Station team is doing some incredibly valuable work with local charities and communities and this latest initiative raises the bar even higher.”