Battersea Power Station Development Company (“BPSDC”), on behalf of the shareholders, is pleased to confirm that the next milestone on the chimney rebuild programme has been reached with the circular rig that will carry specialist contractors and the equipment to dismantle the South West chimney now in place. 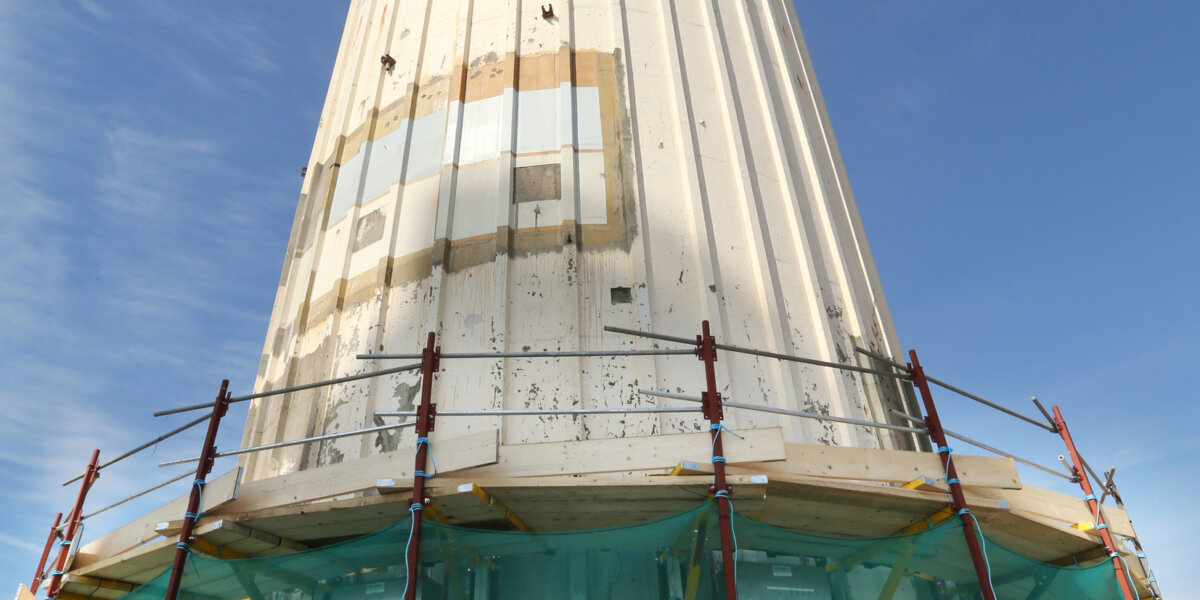 Battersea Power Station Development Company (“BPSDC”), on behalf of the shareholders, is pleased to confirm that the next milestone on the chimney rebuild programme has been reached with the circular rig that will carry specialist contractors and the equipment to dismantle the South West chimney now in place.

The rig is set to slowly climb to the top of the chimney next week. On its way up, specialist contractors from Beroa Bierrum will record details of the chimney in its current form. The dismantling of the chimney by four hydraulic jaws attached to the rig is expected to begin in mid-July.

The chimney debris will be funnelled down a chute in the centre of the chimney, collected and recycled. Several different on-site uses for the material are being explored, including reuse as artwork.

Once the South West chimney has been reconstructed back up to a height of 25 metres above the brick washtower, work will commence simultaneously to dismantle and reconstruct the three remaining chimneys. All four chimneys are expected to be fully reconstructed in early 2016.

Paint scrapings have been taken to ensure that the new chimneys will be visually identical to the chimneys when they were first built. The chimneys will consist of the same materials as the originals, but with more modern steel reinforcements within the concrete to provide a more permanent solution to their conservation than simply refurbishing them. For each chimney approximately 600 tonnes of concrete will removed and a similar volume used in the rebuild.

Philip Gullett, Chief Operating Officer at BPSDC, commented: “The four iconic chimneys are not only one of the most distinctive features of the London skyline; they are the very DNA of this historical building.  Today, we are a step closer to the start of this vital restoration work to safeguard the chimneys and the Power Station building itself for future generations.

The decision to dismantle and rebuild the chimneys was taken following completion of detailed surveys, very close consultation and engagement with English Heritage and the London Borough of Wandsworth and with the advice of expert heritage building consultants Buro Happold Engineering.

Justin Phillips, ‎Partner and Director of Environment & Infrastructure, Buro Happold Engineering, said: “For over 15 years we have tried various different ways of affecting repairs to the chimneys but if they are going to be safeguarded on the skyline for future generations it has become clear they need to be dismantled and rebuilt.  The process will be done sensitively using a circular rig which will gradually descend from the top as the chimney is dismantled, and then ascend shortly afterwards as the chimney is rebuilt.  The rebuilt chimney will be visibly identical but the pattern of the steel reinforcement and the composition of the concrete has been improved to make the new chimneys less vulnerable to corrosion.”

Cllr Ravi Govindia, Leader London Borough of Wandsworth and co-chair of the Nine Elms Vauxhall Partnership, commented: “The four chimneys of Battersea Power Station are a defining feature of both Wandsworth and London’s skyline. For that reason we exercised a real duty of care to make sure the necessary replacement programme will proceed quickly and accurately under any circumstances.  We have agreed a financial bond with the developers which means that there will always be a fund ring-fenced specifically for the replacement of the chimneys which the council can call on. We have also agreed a sequencing strategy whereby at no stage is the Power Station left with no chimneys visible.  By agreeing the bond and the sequencing strategy all those that cherish the Power Station’s distinctive profile can be certain the chimneys are going to be replaced.”

Timothy Jones, Principal Inspector of Historic Buildings and Areas, English Heritage, said: “Battersea Power Station is of exceptional architectural and historical significance and its future is something that English Heritage, along with millions of Londoners, takes very seriously indeed.   The chimney replacement programme is something we have worked on closely with the developers and we’re satisfied that this is the correct way forward and that once the chimneys have replaced you really won’t know the difference.”

Find out more at: www.batterseapowerstation.co.uk/chimneys