Wandsworth Council has tonight (Thursday) approved a plan to build 839 homes, a nursery, shops and public square on the former Battersea gasholder site in Nine Elms. 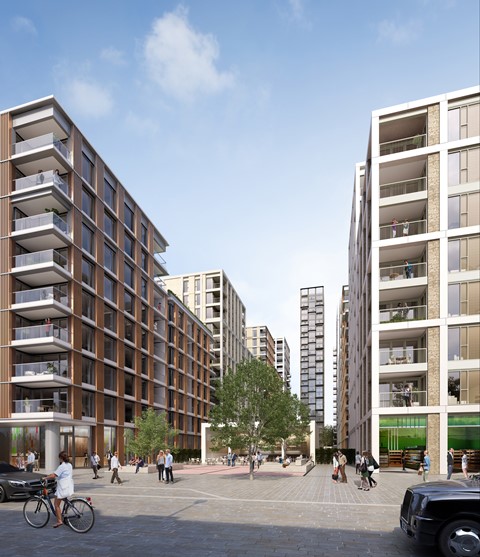 Wandsworth Council has tonight (Thursday) approved a plan to build 839 homes, a nursery, shops and public square on the former Battersea gasholder site in Nine Elms.

The proposal, a joint venture between developer St William and National Grid, would include 201 (24 per cent) affordable homes for local residents to buy or rent at a reduced price.

The four gasholders were decommissioned in 2013 and demolition is already well underway.

The ‘mixed use’ scheme would provide just over 50,000 sq ft of new education or office floorspace. There would be 370 construction jobs created during the building programme and up to 468 permanent jobs depending on the final floorspace use.

The disused gasworks occupies a key position between Battersea Park and the new town centre now being built at Battersea Power Station. The proposal would, with the agreement of Network Rail, create new routes through the site and on through two Victorian railway viaducts which wrap around it. These new links would form key connections in the new area-wide pedestrian and cycle network which is taking shape across Nine Elms on the South Bank.

The plans include 12 new buildings ranging in height from seven up to 26 storeys, designed by architects Squire and Partners.

The developer is set to make a £30million contribution to the cost of extending the Northern Line to this part of Battersea as well as a range of improvements to local community services.

A further £4million is being provided for improvements to neighbouring Battersea Park Station, including a second entrance and new lifts.

Wandsworth Council planning committee chair Sarah McDermott said: “This project will transform another disused industrial site into the new housing our residents need.  It will also create valuable public open space and hundreds of jobs. The proposal comes with well over £30million towards improving community and transport services in Nine Elms which will be absolutely vital to making this new part of the city a success.”

Like all major developers in Nine Elms on the South Bank, St William and National Grid are signing up to a wide-ranging local employment agreement to ensure local residents benefit from jobs and training roles during the building process and once it’s complete.

The scheme will also see improvements made to the railway bridge over Prince of Wales Drive and new tree planting.