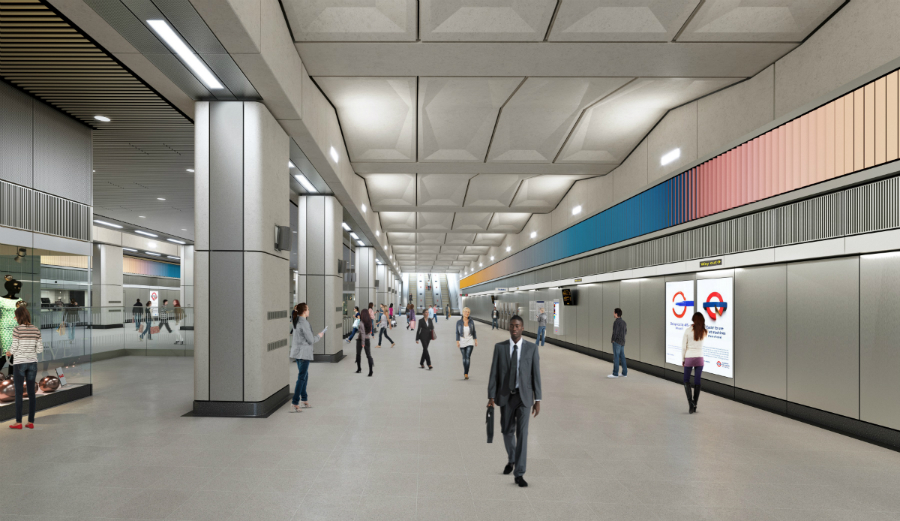 Art on the Underground has announced the permanent artworks to be incorporated into the ticket halls of the two new Underground stations on the Northern Line Extension at Nine Elms.

The two new artworks will be unveiled when the Northern Line Extension opens in autumn 2021. The first major Tube extension since the late 1990s enables the regeneration of the Vauxhall, Nine Elms and Battersea areas, spurring economic growth by supporting around 25,000 new jobs and more than 20,000 new homes.

Art on the Underground announced that the commissions from Alexandre da Cunha and Samara Scott will be incorporated into the entrances of the two new Underground stations and unveiled when the Northern Line Extension opens in autumn 2021.

Alexandre da Cunha’s commission, a monumental kinetic sculpture reflecting on daily cycles titled Sunset, Sunrise, Sunset, will be installed at the new Tube station at Battersea and will stretch to almost 100 metres in length. 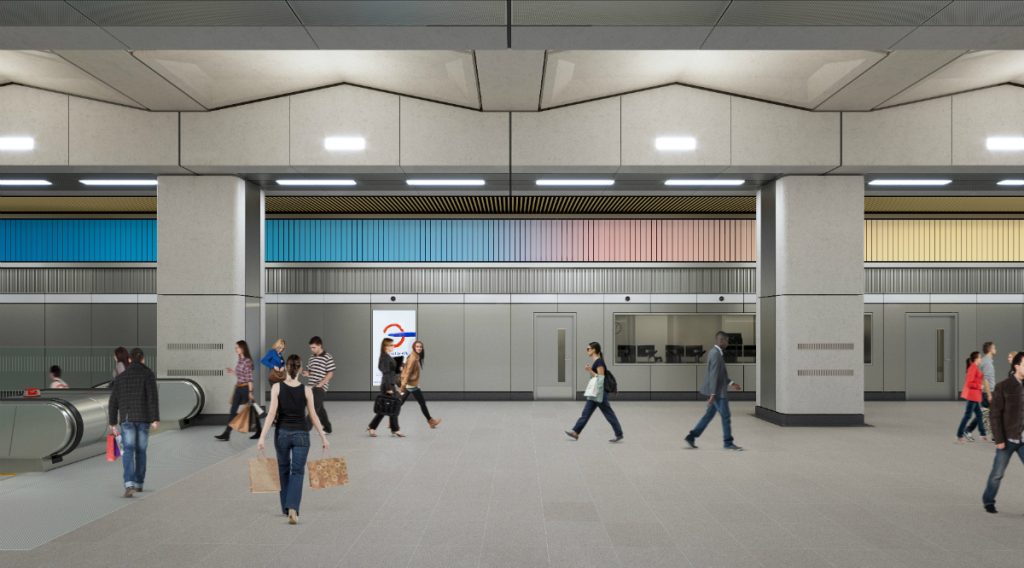 Cllr Ravi Govindia, co-chair of the Nine Elms Vauxhall Partnership and Leader of Wandsworth Council said: “We are delighted to welcome these artists as their creations become part of the fabric of Nine Elms and Battersea.

“These striking artworks reflect our local landscape as well as the changing nature of our neighbourhoods as they are transformed both above and below ground.”

Cllr Jack Hopkins, co-chair of the Nine Elms Vauxhall Partnership and Leader of Lambeth Council, said: “Providing a memorable welcome to residents and visitors, the permanent art commissions enhance our reputation for innovative art and culture as the area links up with the rest of central London via the Tube network in 2021.”

Da Cunha uses an outdated advertising mechanism – the rotating billboard – to create two friezes which will face each other along the length of the ticket hall. Inspired by the former control room at Battersea Power Station and its system of vertical bars that regulated the production and output of electricity into the city, the work refers to cycles, routine, the everyday and eternity.

The friezes will consist of three faces of a different colour, gradually fading from one colour to another over the length of the entire image. The colours have been extracted from photos of London sunsets and sunrises. Throughout the course of the day, the panels will rotate, presenting different combinations of colours into the ticket hall.

The three words of the title refer to the three faces of the vertical panels, their cyclical rotation and repetition. With over 3,500 individual panels, Sunset, Sunrise, Sunset will create an ever-changing environment within the station.

Alexandre da Cunha commented: “Although the core of this piece is colour and its reference to landscape, the work focuses on the idea of movement, cycle and repetition. The analogue aspect of the panels function as an antidote to our constant relationship with digital media, a counterpoint to screens acting as an extension of our bodies.”

Samara Scott’s work at Nine Elms Tube station will mark the artist’s first permanent public commission internationally, and will take the form of a network of richly coloured pools embedded in the station architecture.

Scott has conceived an ambitious nine metre high artwork set into the concrete panels of the ticket hall. It will take the form of coloured liquid ‘spillages’ in excavated sections of the concrete panels, containing objects and materials collected from the local area.

Scott will scavenge objects from local sites including food shops, flower markets, items washed up on the banks of the Thames, construction site debris, and soil and matter from the newly excavated tunnels of the Northern Line Extension. 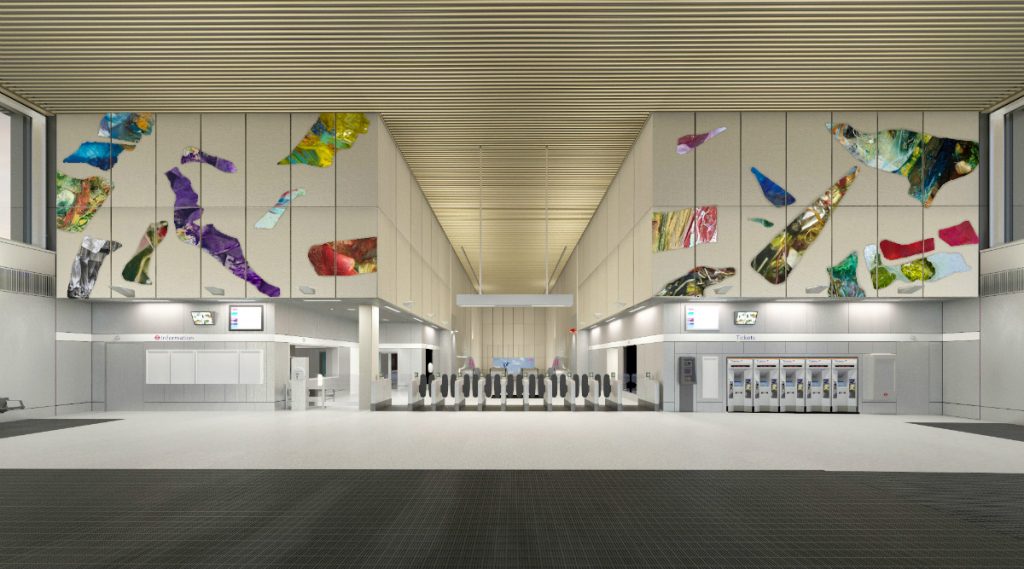 Congealing these objects into richly coloured sap, Scott will form a new topology for the station that chronicles and fossilizes habits, customs, rituals and behaviours of the Nine Elms landscape. The work will cover an area of over 100 square metres and incorporate 28 separate panels.

Samara Scott commented: “I am interested in archiving a rapidly mutating landscape; I find the Nine Elms area a surreal tapestry of high-rise 3D rendered bionic futurism, a horizon of furious construction. All these superimpositions, layers of Latin community over medieval river beds, office worker transit, squatter communities, gay subculture histories and Sunday junk markets all lapping at the tideline of the old motorway belt into the city: the Thames. I want to find a way to talk about these things simultaneously butting and bleeding into each other at the tideline, and the cultural pollution-pollination in a city through materiality.”

Justine Simons OBE, Deputy Mayor for Culture and the Creative Industries, said: “Art on the Underground is London’s largest public art gallery. It has redefined public art, presenting ground-breaking work by pioneering artists to the millions travelling on the Tube.‎ So when the Northern line celebrates its historic extension, it’s only right that two dynamic art works will be in place to welcome Londoners and visitors to these brand new Tube stations. These exciting pieces will inspire a new generation and continue the rich tradition of art and design at London Underground.”

Eleanor Pinfield, Head of Art on the Underground said: “These two commissions will create a unique identity for each station, bringing a wholly different perspective on the riverside community in which they are located. They will bring the work of these artists to thousands of people every day, enriching TfL’s long history of commissioning extraordinary artworks for our customers.

“Da Cunha’s monumental kinetic frieze will become synonymous with the station, drawing people through its ticket hall with its rhythmic daily flow and creating an illusion of a large window to a dramatic sky. Scott’s relief at Nine Elms draws together the detritus around us, pressing passers-by to question both the landscape and the objects we are surrounded by every day.”

Find out more about the Northern Line extension

About Art on the Underground

Art on the Underground invites artists to create projects for London Underground that are seen by millions of people each day, changing the way people experience their city. Incorporating a range of artistic media from painting, installation, sculpture, digital and performance, to prints and custom Tube map covers, the programme produces critically acclaimed projects that are accessible to all, and which draw together London’s diverse communities. Since its inception, Art on the Underground has presented commissions by UK-based and international artists including Jeremy Deller, Yayoi Kusama, Mark Wallinger, and Tania Bruguera, allowing the programme to remain at the forefront of contemporary debate on how art can shape public space. Art on the Underground is funded by Transport for London.

Art on the Underground has been commissioning artists to work with communities in the NLE area since 2017, creating an ongoing dialogue with local residents through hands on activities, active participation and collaboration. In summer 2017, artist Emma Smith launched Televox, a musical score of messages from those living and working on the NLE translated into Morse code, performed in public for the community on a pianola. From autumn 2017, artist Nina Wakeford has been undertaking field work to map the past, present and proposed future of the NLE area with a dual focus on the long-standing LGBTQ+ community, particularly former venue The Market Tavern, and those working on the construction of the NLE. Wakeford is currently compiling her research into the area, to be captured within an artist’s book to launch in November 2019.

The two new permanent artworks by Alexandre da Cunha and Samara Scott were commissioned from a shortlist selected by the Art on the Underground team. Invited artists put forward proposals which were reviewed by Art on the Underground’s Advisory Panel, with one proposal taken forward at each station.