Residents are now in rehearsals for the Big Dance event where they will perform for crowds at Vauxhall Pleasure Gardens at the end of July. 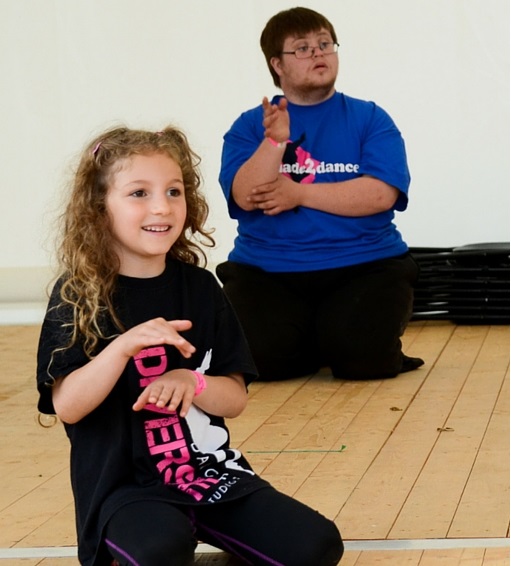 More than 100 residents braved the wet weather to join their neighbours for the Big Lunch and the launch of a major community dance event on Saturday.

Many who turned out for the family fun day at the Rose Community Centre in Ascalon Street also took a turn on the dance floor during taster sessions designed to whet the appetite for next month’s Big Dance event.

Instructor Marcina Urvashi of the Urvashi Dance Company gave residents the chance to try the “yoga dance”, which she is teaching in free weekly classes at the Rose Community Centre ahead of the Big Dance event.

The class has begun learning a yoga dance routine that they will perform as the stars of the show, which is set to be staged at Vauxhall Pleasure Gardens.

Joining the weekly class is free and open to anyone over the age of 50.

Younger dancers of any level of ability or disability also have the chance to perform for when the travelling Big Dance Bus, a converted iconic red Routemaster, kitted out with lighting, a sound system and DJ decks, pulls up for the day at the park in Vauxhall. The Diverse Dance Company is keen for as many 13 to 25-year-olds as possible to take part. The company is also leading free classes every week at the Rose Community Centre.

The two groups will top the bill at the Big Dance event, which runs from 12pm until 5pm on Saturday 30 July.

Big Lunch guests were treated to free Caribbean food, as well as scones cakes and soft drinks laid on by the Nine Elms Point Sainsbury’s store, which is due to return to Wandsworth Road on Wednesday 24 august bringing around 200 new jobs along with it.

Urvashi Dance Company classes will be held from 11am until 12.30pm every Wednesday.

Leader of Wandsworth Council and co-chair of the Nine Elms Vauxhall Partnership Cllr Ravi Govindia said: “Big Dance is an event that everyone can enjoy. This year we decided to target two age groups to make it as sociable as possible. Over the next few weeks, people from all over Nine Elms will be working towards a spectacular live show.

“Nine Elms is a rapidly growing and increasingly exciting place to live and work, which is why we were delighted that the organisers of the Big Dance festival wanted to stop here on their tour.”

Members will be encouraged to use planters, window boxes and balconies if they have them at home.

About Nine Elms on the south Bank:

As well as the rejuvenated Battersea Power Station, the area also includes the new US and Dutch embassies and plans for a new home for new facilities for the New Covent Market which will include the UK’s biggest fresh produce market and add to it a new centre for London’s foodies alongside it.

A district-wide cultural strategy is hard-wiring cultural uses and spaces through each new development to ensure the area reaches its full potential as a new centre for arts and creativity on the South Bank.

Launched in 2006 Big Dance was set up with the aim of bringing dance to people across the country.

It has been staged every two years since 2006 but this will be the final year of the project. It is a festival led by the Mayor of London in partnership with the People Dancing company and Big Dance Hubs, a network of leading dance organisations across the UK.

2012 saw the UK’s biggest ever celebration of dance, with over 3,500 events taking place at all sorts of locations – lidos, shopping centres, parks, palaces, schools, high streets and squares – in all dance styles, as part of the London 2012 Festival, the culmination of the Cultural Olympiad.