Be dazzled with visual projections and a line of light as the FREE Line of Light outdoor festival follows the route of the new Northern line extension between Battersea Power Station and Kennington, via Nine Elms, on Friday 29 and Saturday 30 October. 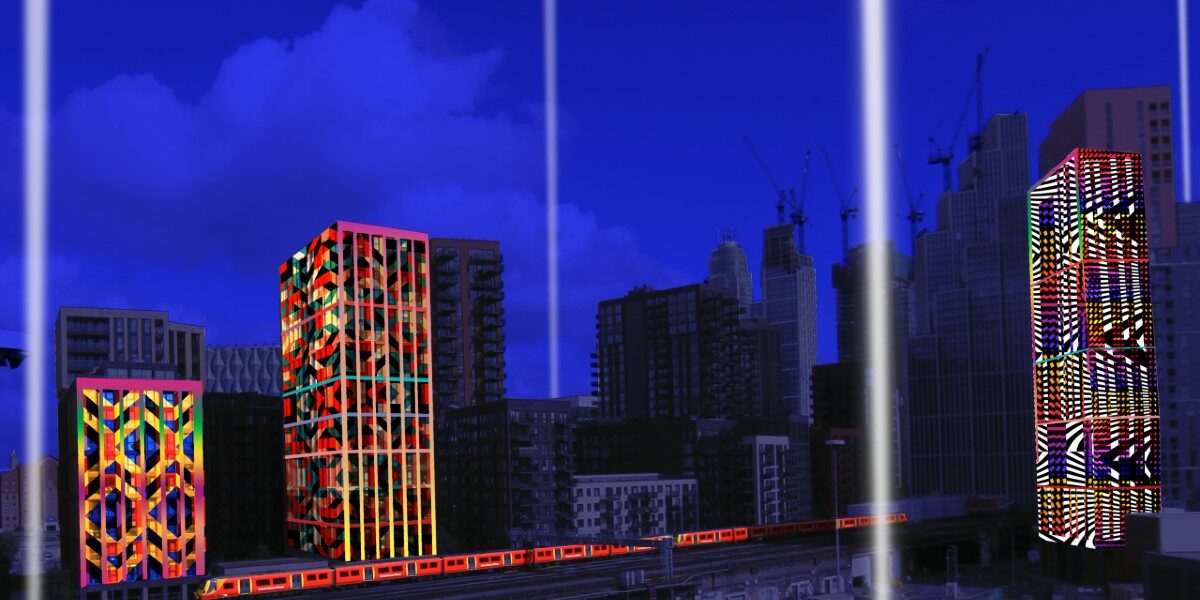 The FREE Line of Light outdoor festival features lights and visual projections from Projection Teknik and will follow the above-ground route of the 3km Northern line extension tunnels each evening on Friday 29 and Saturday 30 October.

Between 6.30pm and 10pm, a daisy-chain of high-density light beams illuminates the new stations at Battersea Power Station, Nine Elms and Kennington, and paints the route of the tunnels in the sky to create the Line of Light.

A selection of buildings along the route between Battersea Power Station and Kennington station are lit up with visual projections, accompanied by soundscapes available as downloadable podcasts which have been created with local groups and the Royal College of Art to make an specially-commissioned ‘album’ of the area.

Find out more about the projections and download the soundscapes at lineoflightfestival.com

Celebrate the new Northern line extension with the communities who live and work above the route between Battersea Power Station, Nine Elms and Kennington Tube stations.

Two outdoor festival hubs at New Union Square, SW11, and Wilcox Road, SW8, bring together local businesses and communities with pop-up food stalls open from 4pm-9pm and free activities and entertainment for all ages from 6pm-9pm.

Open with food stalls from 4pm, music and entertainment 6pm-9pm

Take time out at New Union Square with live music from Battersea Power Station choir, World Heart Beat music academy and Joplin Parnell. Pick up some moves from dancers at The Bollywood Company, get cycle-fit with Static or join in a workshop with Neon Performing Arts on Friday.

Featuring pop-up food and drink stalls from local cafes and bars including beers and pizza vouchers for Nine Elms Tavern, cocktails from The Alchemist and hot drinks and cakes from Black Cab Coffee.

Just across the road from the new Nine Elms Tube station, drop into the festival hub at Wilcox Road, supported by Vauxhall One, to hear music from Battersea Power Station choir and performances from The Boury Academy on Friday. Catch Neon Performing Arts from 4pm on Saturday with performances and workshops including TikTok with choreographer Danielle “Rhimes” Lecointe. Lambeth Library will also be running activities for children on both days from 4.30pm.

Why not take advantage of some tasty special festival offers along the route?