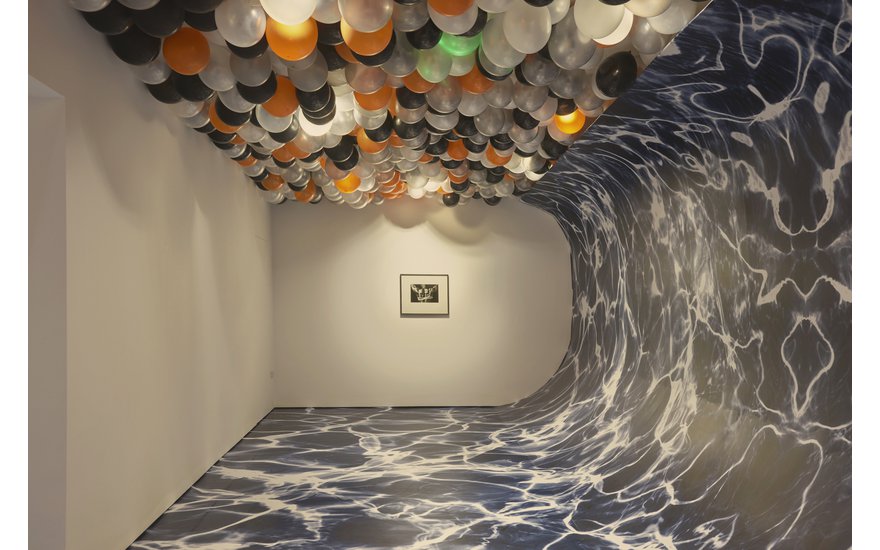 Envisaged as a site of abundance in which various positions and propositions accumulate and intersect, the exhibition comprises an extended sound work and installation that explore how to create the conditions for polyvocality. Lasting six hours – the length of Gasworks’ opening hours – Ifekoya describes their sound work as ‘a black queer algorithm across generations, locations and political affiliations’.

‘a black queer algorithm across generations, locations and political affiliations’.

It is made up of different textures, qualities and recording techniques that evoke contrasting moods and situations: from a near-constant layer of underwater and inner body sounds to a fugue-like chorus that gives structure to the work and demands periodic attention. Vocal samples draw from literature and theory, music, conversations with friends, and other more intimate thoughts and reflections, often returning to key refrains.

Suspended from the gallery ceiling, a bespoke sound system articulates and gives form to the broad range of frequencies and fidelities held within this work. This was designed and made together with a group of London-based peers during a series of workshops leading up to the exhibition. Having learned the necessary skills and technical knowledge, this crew will lead on maintaining the system as a community resource in future. A grayscale ocean covers the floor beneath the sound system, arching upwards in waves at either end of the gallery. At the crest of the largest wave is an installation of black, white, silver and orange helium balloons that references The Loft, a party that revolutionised the club scene in downtown Manhattan during the 1970s. These will deflate and fall over time, slowly bringing the party to an end. But the waves of inheritance continue: at the far end of the gallery the photograph Bodybuilder with Bra (1990) by London-based artist Ajamu is shown publicly for the first time since the year it was originally made.

Evan Ifekoya’s exhibition is commissioned and produced by Gasworks, where Ifekoya has been a studio holder since June 2017, with major support from Arts Council England, Catherine Petitgas and Gasworks’ Exhibitions Programme Supporters 2018-19. Leading on the design and build of the sound system are: James Bunton, Kiera Coward-Deyell and Nick Sigsworth. Collaborating on the build are: Naeem Davis, Rabz Lansiquot, Shenece Liburd, Natasha Nkonde, Shy One and Gin Wilson.