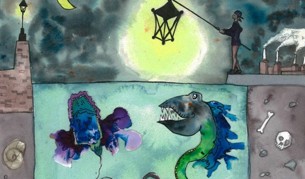 Parade: The finale event to the Kids create Club ‘Monster Soup workshops’  – a culmination of the work achieved by the young people throughout the term. The parade will include their physical puppet lanterns of different creatures from the River Thames – a short parade from the ROSE Community Centre down to the river.

Through the Kids Create Club programme, Pump House Gallery has been working with artists and local communities to find ways to explore, capture and animate the local surroundings. Building on the success of last term’s Superhoodies project, this term’s project, in collaboration with Puppets With GUTS, has been about connecting the ROSE Community Centre to the soon-to-be opened Village Hall at Battersea Power Station. The Monster Soup project explores creative connections between Patmore, Carey Gardens, Savona Estates and the nearby River Thames and is part of Wandsworth Council’s wider arts and cultural offer.

In the past term, Kids Create Club participants have collected water samples from the river and documented fictional microbes in the water, after which they began designing their very own giant, illuminated puppet monster. These imaginative creatures will meet in a final public event on 24 March giving everyone the chance to show off their creation!

Partners: Kids Create Club is supported by Enable Arts on behalf on Wandsworth Council and is a partnership between Pump House Gallery, Puppets with GUTS and the ROSE Community Centre with thanks to St George’s Primary, Griffin Primary, Yvonne Carr Centre and Carey Gardens Estate Coop.

Commissioned and managed by Pump House Gallery, part of the OutHouse programme, delivering off-site activities and workshops across the borough of Wandsworth. Funded by Wandsworth Council and Battersea Power Station Foundation.

Address:
Starting at the Rose Community Centre, Ascalon Street, SW8 4DL and parading down to Nine Elms Pier on the River Thames