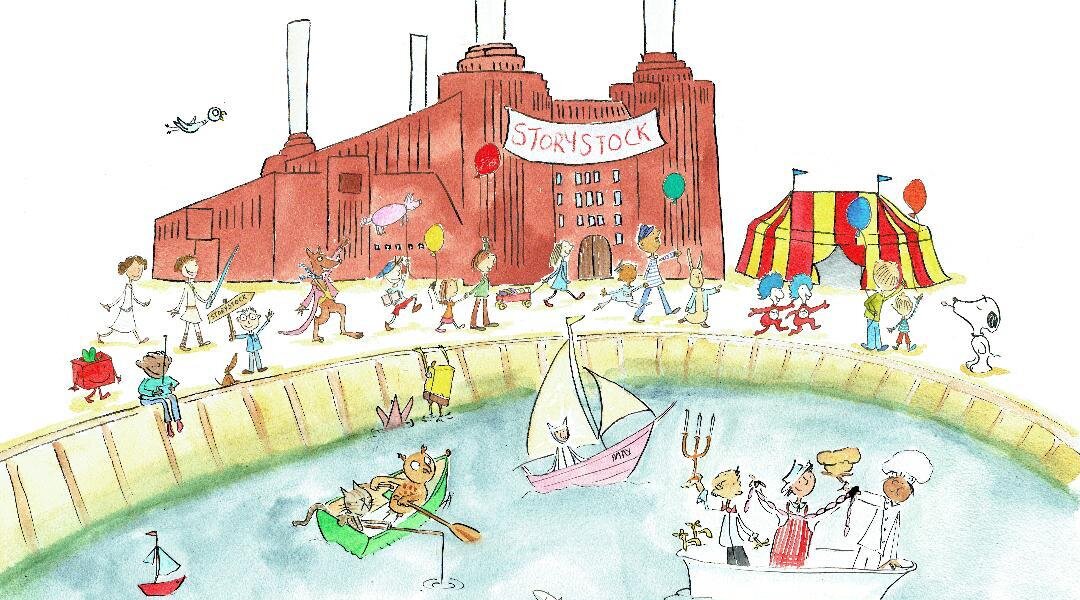 Storystock, the travelling circus of stories, is bringing a programme of family literary fun to Circus West Village, Battersea Power Station, this half term. From the 12th – 14 th February, primary school aged children will be entertained with liveliterature shows, immersive workshops, performances and interactive storytelling sessions. The activities will be taking place at The Village Hall, a new community arts and cultural venue at Circus West Village, the first chapter in the regeneration of Battersea Power Station. Special guest appearances include legendary children’s author and illustrator Judith Kerr, who will be celebrating the 50th anniversary of The Tiger Who Came To Tea on 13th February with a live story telling performance, followed by a Q&A.

Families can take the time to explore Circus West Village together and enjoy lunch or a drink overlooking The Thames. Parents can also leave their children to be entertained at one of the fantastic workshops and visit one of the many restaurants, take a break with a coffee at The CoffeeWorks Project, go spinning at Boom Cycle, pop into The Battersea General Store or explore the Battersea Power Station Design Store for gifts and homeware. Restaurants include Italian food from world-renowned chef Francesco Mazzei at Fiume, seafood at Wright Brothers, pizza at Mother and all-day dining at No. 29 Power Station West. Vagabond, an independent wine bar and shop is also open for drinks and snacks. Battersea Power Station’s pop up space under Grosvenor Arch will also host a bookshop, a free supervised doodle bar for kids, and space for parking prams.

Highlights of the festival include:

Happy 50th Birthday to the Tiger with Judith Kerr and special guest – 13th February 12pm Judith Kerr, who will be celebrating the 50th anniversary of The Tiger Who Came To Tea on February will host a live story telling performance, followed by a Q&A.

Storytelling: The Tiger Who Came To Tea – 12th -14th February 11am and 2pm Settle down to celebrate the wonderful world of Judith Kerr with all your favourite stories: Listen to Mog’s Adventures, find out what happens in The Crocodile Under the Bed and wish a very happy 50th birthday to the Tiger who Came to Tea. A lovely interactive storytelling session for a younger audience, with special character appearances.

The Cat in the Hat – 12th -14th February 12pm and 3pm. Join the Storystock storyteller in the multi-coloured mad and marvellous world of Dr Seuss with cats in hats, green eggs and ham & foxes in socks. A lovely interactive storytelling session for a younger audience, with special character appearances.

The Power of Adventure – 12th February 12pm. Winner of the Costa Children’s Book Award 2017 and thrill seeker Katherine Rundell is in conversation with bestselling writer Abi Elphinstone about the power of adventure and exploration in their books. A wonderful opportunity to hear two popular children’s authors in conversation.

The Owl Who Was Afraid of the Dark – 12th February at 4pm and 13th and 14th February at 10am. Riverside Performing Arts presents Jill Thomlinson’s classic tale that is an enchanting story about growing up, tackling your fears and becoming your own person. Filled with song, puppetry, dance and laughter, this touching story is beautifully adapted for the stage.

Once upon a Yoga mat – 12th February 10.15am and 2.15pm, 13th & 14th February 10.15am. Have you ever done a sun salutation with a Gruffalo? Once Upon a Yoga Mat is a brand new and entirely immersive way of introducing the practice of Yoga to children. These Yoga-telling sessions take the narrative of much loved stories and incorporate Yoga postures, movements, simple breath awareness and relaxation techniques into the structure of the stories.

Charlie & Lola stories – 12-14th February 1pm and 4pm. Come and join in with this lovely interactive storytelling session as Charlie & Lola take your imagination on a wild ride where the milk is always pink and Soren Lorenson, Lola’s imaginary friend, is up to all sorts of tricks. Perfect for a younger audience. Includes special character visits.

I Can Draw – 12th and 14th February 3.15pm. I Can Draw with the Bright Emporium’s Illustrators is a workshop that will inspire everyone to take up pencil and paper. With live drawing from the professionals, learn to make stories and pictures come to life in an inspiring and interactive draw-along workshop.

All Write Now – 13th and 14th February 11.15am. All Write Now is a creative workshop with a difference. This workshop is all about putting the imagination first and bringing out the enjoyment of learning.

Dragons, Poetry and Robots from Outer Space with AF Harold – 14th February 12pm. Enjoy this funny performance while joining in with some proper poetry. There might be dragons, there will be robots and lots of chat about space.

The Cat in the Hat

The Power of Adventure

Once upon a Yoga mat

Sophie Henn – a world of illustration

The Owl Who Was Afraid of the Dark – Creative Drama Workshop

Dragons, Poetry and Robots from Outer Space with AF Harold